When it comes to fantasy makeup, there are no limits as to variety, and there are also no limits to subject matter, as it can entail almost any theme of life by adding a touch of the mysterious to the look to create a great facial design.

The reason for this is fantasy is something that exists in each one of us individually, and what reality is to one person, fantasy may be to another, as they imagine themselves to be something they aren't.

Of course fantasy makeup isn't all that complex either, as some just like to put on some makeup to create a fantasy look for Halloween or some other costume party event.

Others want to make a statement with an outrageous look that garners the type of attention they're looking for.

Whatever the reason, fantasy makeup is a lot of fun, and result in some awesome looks.

Fantasy makeup goes far beyond simple liner and eye shadow, as it incorporates all the tools at our disposal, including jewels, and all sorts of accessories to complement our makeup, or the overall look that is chosen in general.

That means a lot of fun, along with a plethora of looks that span almost any design you can think of.

Because of that, we need to narrow down the ideas we have so we don't get overwhelmed. Think of a theme and predominant color to start with and go from there.

You can get as creative as you want once you have a foundation to work from, as you can build out the look from the specific idea you choose from.

I love this fantasy makeup look. The feathered eyes extending out in several directions look fantastic, and somehow the dark and pink colors don't clash as one would think they might.

The upper and lower eyelashes also look great, and blend well the the feathers.

That little touch to the lips, where it is extended up in two areas adds a very nice touch that complements the rest of the look.

Fixing the hair as she did completes the overall look, which really works well together. Terrific job. 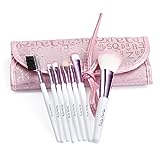 Lest you get discouraged from the awesome look of the first fantasy makeup photo, here's one that looks wonderful, even though it is much less detailed than the first one.

Here we have cute rainbow eyes with the nice scrolling makeup around the temples and on the forehead. The flowers in the hair give it a nice, wholesome feel. It's a subtle way to design a great fantasy look.

These beautiful leaves extending from the eyes is gorgeous, as it the choice of colors, which seems to be autumn related, if that's what is trying to be portrayed.

The purple, yellow and gold color combination goes well together, as does the purple eye shadow where the foliage appears to come from. Very nice.

There is glitter, Goth, frostbite, and another surprise. The idea is to garner as many ideas as you can from them and use them to make your own fantasy makeup creation.

This particular makeup look has about as many little accessories and pieces as I've seen, and they're applied in a seemingly indiscriminate way which makes one wonder what it is that she is.

More than likely this is a design statement not meant to represent anything - whether realistic or fantasy.

Everything here screams at you, and those wild, long lashes, the jewels and other items, and those unique lips all add up to make a makeup statement that soon won't be forgotten.

What fun this fantasy makeup look is. The green theme is terrific, and all those accessories combine to create a truly awesome look.

I like the way the dark green on the forehead is applied, which works well with the lighter green color it flows into, reaching all the way down to the nose and cheeks. The silver eye shadow and rhinestones also work great with the otherwise totally green color theme. The exception to that is the orange by the ear, although I can't quite make out what that is. There are also the gold dots in the hair.

This is definitely a busy and ambitious look. You can get lost in all the additions to the facial makeup which make it such an awesome fantasy costume.

What is compelling about this fantasy makeup look is the way two colors are used to create such a gorgeous design. Adding the rhinestones and long, colorful eyelashes completes a magnificent creation.

The hairstyle, clothing choice and nails combine to generate a fantasy that anyone would want to engage with. Wonderful job.

Fantasy makeup probably is the largest genre of the unique makeup looks, as once you leave standard makeup, everything else is probably going to be categorized as fantasy, especially as it pushes the bounds and limits of everyday life.

That gives women a lot of leeway in their creations, and they can be confident whatever choice they make, it won't be too far out there, especially when making yourself up for a Halloween party, cosplay, a costume party, or in wanting to make a statement when going out on the town.

This is why choosing a fantasy makeup theme is such a compelling choice. There will be no trouble in coming up with an idea that fits exactly what your particular fantasy is for the look you want to be seen as.