If your child enjoyed Disney's Frozen movie which takes slight inspiration from the classic fairy tale the Snow Queen, you really can't go wrong if you decide to throw them a Frozen themed birthday party. There are plenty of Frozen birthday supplies you can use to create the perfect winter wonderland and lots of amazing disney frozen party ideas which will make your party the coolest. I hope to share some of these with you right here, to help you on your way.

This theme is perfect for girls as the story follows two sisters Anna and Elsa, who are both princesses. Elsa has the ability to turn things into ice but does not have much control over it and it gets into some trouble because of this. She ends up running away and Anna her sister goes on a journey to find her.

I hope I haven't given too much away but I suspect that you've probably already seen the movie if your looking to theme a party around it. Anyway as you can see there is the princess theme which means your little one has a chance to be a beautiful princess for the day and add plenty of fun elements from the movie ino their party too.

Featured on this page is everything from cake decorating kits, fun favors, party décor, personalized invitations, free printables to licensed disney frozen party supplies. The are also lots of DIY frozen theme party ideas featured here to help you save and be creative by adding in personal touches.

There are some beautiful Frozen birthday invitations out there so it won't be too difficult for you to find the perfect ones for your party. Just check out the example featured to your right... I love how vibrant the colors and animations are and of course how beautiful our snow queen Elsa looks on it. These invites can be found at the Green Castle Designs ebay store (also featured below) and is a digital download (so you can print them off as many times as needed) which will come personalized with details and everything. There are lots of different designs and Frozen party invitations you can choose from on ebay and etsy. So depending on what you want you'll find ticket style, photo invites and custom frozen printable invitations.

Another idea would be to make your own frozen party invites. Here's an idea, why not make a paper snowflake by folding up paper and snipping the edges off. When you open it up it will have snowflake like patterns.All you have to do now is stick this onto a light blue card which will give your snowflake a skyblue like background. You could use a silver glitter pen to add some sparkle to the snowflake. It's a really easy way to make simple diy invites which match the theme, here's an example.

HaleGraphx created these free Frozen invitation templates. Click the image to download the templates to your computer so you can print them off. All that's needed is you to fill them in with the details of the party after that. When printing I would recommend printing invites onto cardstock for sturdier finish.

If your looking for some frozen birthday cake ideas and pictures of cakes to give you a few ideas on how to make your disney frozen birthday cake, a great place to look is Cake central. Even if your having the cake professionally done you could print off cakes of interest and have your cake decorator use it as inspiration for how you'd like it done.

Disney frozen cake decorations are not too hard to find, so If you're planning on making the cake yourself you've got plenty of nice little extras you can use to make your life much easier. Like one of the frozen cake toppers or the set of frozen figurines. It can really be as simple as frosting the cake with white icing and then putting a few figures on there.

Of course if you'd prefer to make something a little more special, a tasty ice cream cake would be great for this theme. The Learn how to cook channel has a great video showing you how to make an ice cream cake with a buttercream border and sprinkles. It's featured below along with some video tutorials and ideas to make Disney Frozen birthday cakes, cupcakes and cake pops.

How to Make Disney Frozen Cakes and Cupcakes

Decorating your cake with a Disney frozen cake topper will make things pretty easy. The only things you'll have to worry about is what kind of cake you want to make and what kind of icing to use. Once you've popped one of these on it, your cake will look like a scene from the movie.

Dolls can make great cake toppers too especially when they are just the right size. This Elsa and Anna doll set has the girls wearing their ball gowns and ready to take center stage. An Olaf figure is included - who doesn't love him right? The dolls are small kid of like the polly pocket dolls so won't look out of place when placed on a regular sized cake.

HaleGraphx has made these free printable Disney Frozen cupcake topper templates featuring Princess Anna and Elsa. Print onto cardstock paper, cut and stick to a craft or lolly stick then pop into cupcakes.

Winter themed Disney Frozen cupcakes will be a real treat for guests. For premade decorations that you just need to put in place there are cool cupcake toppers and wrappers that will make decorating an absolute breeze. 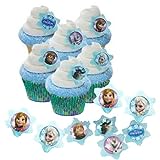 There so many things you can use for your frozen party decorations as the theme is basically winter based thanks to Elsa's abilities. So we can integrate plenty of christmassy style decorations to make our party look like a winter wonderland minus the cold.

The main theme colors can be purple, light blue or turquiose and white. A great way to spead these colors around your party is with party streamers and balloons. The good thing about this is that these are relatively cheap to buy from local stores. Make balloon bouquets and weave the streamers together before hanging them up.

To make a beautiful backdrop you can hang up clear lights, you know the ones used to decorate christmas trees and hang gauzy material or clear shower curtains in front of it as seen here, it creates a beautiful faded light effect. In fact you you could use different colored lights to represent parts of the movie. For example blue and green lights would represent the aurora borealis that could be seen in some parts of the movie and blue lights would give a look more remincant of the ice castle Elsa made.

Since we're diving into christmas decorations white tinsel would be great as fake snow decorations, you could drape them on the chairs at your party table, on windows and around door frames..

As further disney frozen decorations use frozen coloring pages as posters. Have the kids color them in and hang them around the party, they will act as posters and good wall décor. Putting up fun quotes from the movie always works well too so you could print of these free frozen movie quotes (courtesy of paging super mom) and have them framed on the walls or on the party table.

Make some paper snowflake decorations by following these tutorials. String them together and and have them hanging from the ceiling or use some ribbon or string to make a garland type banner with the snowflakes. The cool thing about these is that it's easy to make and there are lots of different types of snowflakes you can make - How does that old saying go again "No two snowflakes are exactly a like", well there may be some truth to that because there are tons of different vids showing you how to make snowflake patterns and styles ranging from simple to 3d paper snowflakes.

This huge Olaf mylar balloon would make a great center balloon. Have it bunched together with a few latex balloons which match your theme colors and you'll have a pretty balloon bouquet with Olaf as the star.

This set of Disney frozen Elsa and Anna balloons would be perfect amongst a few purple, blue and white latex ones. Each balloon features a sister and would be a great way to bring some of the characters into the party. A bouquet for each would ensure that you have plenty of balloons and color around your party.

Banner, paper cube figures, Elsa and Anna paper dolls are just some of printable Disney Frozen birthday decorations that skgaleana is sharing. Click the image to see all free printables you can use to make your own Frozen party décor. 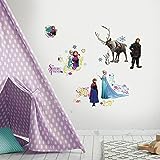 As wall decal these Disney frozen wall decals will transform your room instantly upon application. What's great about these is that once you done with them at the party you can peel them off and stick them in your little one's bedroom. 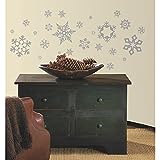 As added decoration these Glittery snowflake decals would be a fitting addition to the theme and add lots of extra sparkle.

Making your own favors will take a little bit more time and effort but will help you save and it's always nice to see kids enjoy favors you've created yourself. Here are a few Frozen party favors you can make that your guests will think are ice cool.

Make your own Snow globes by using mason jars or plastic containers, glitter, baby oil and stickers or little toys. Andrea has a awesome tutorial for making Frozen themed snow globes here. It's not very hard to make these so you could have the kids make these as part of the party activities and include small toys and other items, for them to make a unique snow globe of their own.

Print of these princess crown templates on cardstock paper to make these simple crowns that kids can wear at the party. This also would make a fun activity as you could print off the templates for the crown and prepare a work station which has glitter, construction paper, fake jewels which kids can use to bedazzle their crowns.

How to Make Olaf the Snowman Pencil Toppers

Prefilled favor boxes can be a great time saver as the favors will be handled for you. This frozen themed Favor box includes a rubber flower ring, body crystals, bubble wand, tiara combs and candy filled shoe. To get a better look at it's contents and to find more licensed Disney Frozen party favors and supplies click the image. 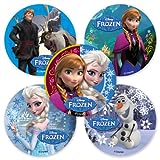 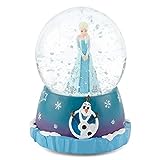