Be Nice and Have Fun

But Don't Be Boring

Okay, I admit it, parties can be boring. Work parties, birthday parties...you go even though you don't really want to and you have to give a gift while you're at it and hope you don't embarrass yourself. I worked in an office for decades, so believe me, I know all about obligatory gifts - that's why I called the Zazzle gift store I opened the Obligatory Gifthouse. But I really think these gifts can make an event that's an obligation into something fun - and they don't cost a lot of money. Cheap is important. So get the man who's about to become sixty something he'll laugh at and that will make him happy...and that will also help break the ice at his party, and not break your own wallet. Then maybe when it's your turn, he'll do the same for you. If you're lucky...

He's turning sixty - cause for celebration, but also laughter. You will not find the usual "old fart" jokes here - or not many, anyway. These gag gifts for 60-year-old guys are classy, clean, and real lasting presents - not just something he'll stick in a drawer after a chuckle or two. These ideas are suitable for your male person, whether he's a coworker, dad, husband, relative, or friend.

You'll find hilarious 60th birthday t-shirts for men (some of them written by me), funny books about becoming sixty, and cool novelty items.

Check out this hat that dryly takes a twist on the "new" axiom that "sixty is the new forty."

These books are exactly what the party planner ordered - books about actually turning sixty. Bet you didn't know they wrote books like that?! It's true. It's a new world.

What You Don't Know About Turning 60: A Funny Birthday Quiz
This book is cheap party entertainment! At a sixtieth birthday celebration, especially in the office, you'll often find people of different generations who don't normally mingle just standing around wondering what to say. People will pass around this thing and quote from it and everyone will find it amusing.
Buy Now

1,000 Unforgettable Senior Moments: Of Which We Could Remember Only 246
With examples of famous people's classic goofs that classify as "senior moments," this wonderful book will entertain for hours!
Buy Now

You're Only Old Once!: A Book for Obsolete Children
A classic...but one that many haven't heard of - well, until they get to be a certain age. Theodor Geisel didn't only write for kids when he wrote as Dr. Seuss. This book is an absolute gem and will have a place of honor in the recipient's bookcase.
Buy Now

Funny 60th Birthday Mugs - Mugs Do NOT Have to Be Boring! 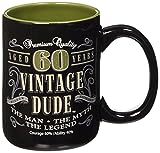