Funny versions of The Night Before Christmas

Twas the night before Christmas

when all through the land

all the writers were busy trying their hand

at penning a poem that would certainly make

everyone laugh 'til their funny bones ached...

With apologies to Clement C. Moore, here are some funny "Night Before Christmas" parodies to get you laughing. If you don't laugh until your funny bone aches, you'll at least get a good smile from some of these alternate versions of the poem that have been shared across the web for others to enjoy.

'Twas the day after Christmas and all through the house

Wrappings and toys littered the floor,

An incredible mess that I did abhor.

With Mom in her robe and I in my jeans,

We waded in to get the place clean.

When suddenly the doorbell: it started to clatter,

I sprang to the Security-View to check out the matter.

Was trampled and icy and treacherous to foot.

But suddenly in view, did I gasp and pant:

The door flew open and in they came,

Stern-looking men with bills in my name.

On Discover, on Visa, on American Express,

On Mastercard too, I sadly confess,

Right to my limits, then beyond my net worth,

Over the top I had charged, in a frenzy of mirth.

The black-suited men, so somber, so strict,

I wondered why me that they had first picked.

They stared at me with a look I couldn't miss,

That said "Buddy, when are you for paying for this?"

I shrugged my shoulders, but then I grew bolder,

Went to the cabinet and pulled out a folder.

"It's bankruptcy that I'll have to file!"

And with a swoop of my arm, my middle digit extended

I threw the bills in the fire: the matter had ended.

The scent of burnt ash came to my nose,

As up the chimney my credit-worthiness rose.

Without another word they turned and walked out,

Got into their limos, but one gave a shout:

"You may think that's the answer to all of your fears,

But it's nothing you'll charge for at least seven years!

The REAL Night Before Christmas - Illustrated by Mary Engelbreit 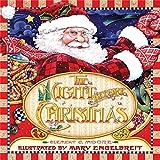 The Night Before Christmas

Amazon: Engelbreit's visions of sugarplums translate to a busy-bright patchwork of checks, plaids, paisleys and chintzes in this oversize (11" x 11") volume. Her interpretation of Moore's poem features a cast of rambunctious elves who accompany an exceptionally jolly St. Nick as he leaves assorted old-fashioned candies and toys inside a home decorated in a spectrum of Engelbreit's trademark patterns and prints. Kids-and adult fans of the artist-will enjoy poring over the copious details.

Twas the night before Christmas when all through the house

I searched for the tools to hand to my spouse.

Instructions were studied and we were inspired,

In hopes we could manage "Some Assembly Required."

The children were quiet (not asleep) in their beds,

While Dad and I faced the evening with dread:

And, thanks to Grandpa, a train with a toot!

We opened the boxes, my heart skipped a beat....

Let no parts be missing or parts incomplete!

Too late for last-minute returns or replacement;

If we can't get it right, it goes in the basement!

When what to my worrying eyes should appear,

But 50 sheets of directions, concise, but not clear,

With each part numbered and every slot named,

So if we failed, only we could be blamed.

More rapid than eagles the parts then fell out,

All over the carpet they were scattered about.

"Now bolt it! Now twist it! Attach it right there!

Slide on the seats, and staple the stair!

Hammer the shelves, and nail to the stand."

And then in a twinkling, I knew for a fact

That all the toy dealers had indeed made a pact

We spoke not a word, but kept bent at our work,

Till our eyes, they went bleary; our fingers all hurt.

The coffee went cold and the night, it wore thin

Before we attached the last rod and last pin.

Then laying the tools away in the chest,

We fell into bed for a well-deserved rest.

But I said to my husband just before I passed out,

"This will be the best Christmas, without any doubt.

And not have to run to the store for a thing!

For the perfect, most perfect, Christmas, I bet!"

Then off to dreamland and sweet repose I gratefully went,

Though I suppose there's something to say for those self-deluded...

I'd forgotten that BATTERIES are never included!

Twas the night before Catmas

When all through the house

Not an animal was stirring,

Not even the mouse.

The kitties were snuggled

And tucked in their beds,

While visions of cat goodies

Danced in their heads.

Their stockings were hung

By the cat bowls with care,

In hope that Father Catmas

Soon would be there.

Out on the rooftop

There arose such a hissing,

Was having trouble parking.

I jumped on the couch,

Stuck my nose to the curtain.

What to my deep blue eyes

But Father Catmas himself

He purred and he purred,

But through the kitty door he went,

Then stopped and smelled the air

As he picked up a scent.

Were by the back door.

The kitties had baked them

Not an hour before.

He went about his work

With never a sigh,

He waved at me

With his mighty paw.

Although I was hiding,

'Twas my little nose he saw.

Out the kitty door he went

In oh such a rush,

Were raring to go.

Especially in the snow.

I could hear him hissing

As he disappeared that night,

"Merry Catmas to all!

Twas the night before Christmas and all through the town

No noses were frozen, no snow fluttered down,

No children in flannels were tucked into bed,

They all wore shorty pajamas instead.

To find wreaths of holly was not very hard

For holly wreaths grew in every yard.

In front of the houses were Daddies and Moms

Adorning the crotons and coconut palms.

The slumbering kiddies were dreaming with glee

That they would find waterskis under the tree.

They all knew that Santa was well on his way

In a red Thunderbird instead of a sleigh.

He whizzed up the highway and zoomed up the roads

In a snappy convertible peddling his loads.

As he jumped from the car he gave a deep chuckle

He was dressed in Bermudas with an ivy league buckle.

There weren't any chimneys, but that caused no gloom

For Santa came in through the Florida room.

He stopped at each house, stayed only a minute

As he emptied his bag of the toys that were in it.

Before he departed he treated himself

To a glass of Papaya juice left on the shelf;

Leaped into the car and put it in gear

And drove over bridges, singing with cheer.

But we heard him exclaim as he went on his way

Larry the Cable Guy reads this funny Night Before Christmas story that has been altered to be "politically correct."

Grinch Face Shirt, Grinch Boxer Shorts and Other Grinch Gear
Dr. Seuss' Grinch is one of the best known characters of the holiday season. Now you can wear a fun Grinch shirt to celebrate the holidays in style. Or check out the Grinch boxers....

Free Funny Christmas Cards
During the holidays, people tend to get sentimental, and most Christmas cards reflect this reality. They show peaceful scenes of winter snow and peaceful sce...

Funny Christmas Songs
Christmas carols are great, but sometimes "Silent Night" just doesn't fit the mood. If you want something funny and upbeat for your Christmas party...

Fun Christmas Cards: Dogs with Holiday Cheer
During the holidays, we see cards with a variety of images - Christmas trees, Santa Claus, nativity scenes, reindeer, and so on. But Christmas cards with dog...

Unusual Christmas Cards
Each year, Americans send millions of cards during the holiday season, and most of them are traditional folded greetings or flat photo cards with faces of sm...

Creative Christmas Letter Ideas
Do you dread writing your annual Christmas letter? Is it a chore to put words to paper? Then forget everything you learned in high school about writing and j...