Who's Scarier than the Grim Reaper?

No one is scarier than the Grim Reaper. He strikes fear into the heart of every person or thing.

This page serves up information on the Grim Reaper, Grim Reaper Home Decorations and Grim Reaper outdoor decoration for people looking for a good dose of fear or even Halloween fun.

Who or What is the Grim Reaper?

The Grim Reaper is death personified. Our current version of death as a skeleton character in a black cloak carrying a scythe originates in the 15th century. The Grim Reaper is either death himself or acting as agent of death transporting the dearly departed to their new supernatural home. There are two schools of thought on the Grim Reapers role. He either has no power to affect change in a persons destiny or he does have a choice making him susceptible to trickery as seen in Greek myth with Sisyphus.

Notably the Grim Reaper has become synonymous with the Angel of Death.

Do you think the Grim Reaper is a real figure?

Your Opinion on the Reaper - Share your grim thoughts

Let see what your impression of the cloaked man carrying a scythe. 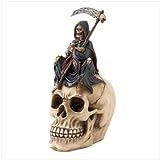 Collectible Grim Reaper Skull Home Decoration Figure
Yikes...this guy means business. The skull, a symbol of death, sits creepily beneath the Grim Reaper with his notorious scythe at the ready. Whether is used as a Halloween decoration or a tribute it is sure to keep you guest on edge as they stair into their fate. Product features: Size: 2 1/2" x 3 3/4" x 6 1/4" Material: Polyresin
Buy Now 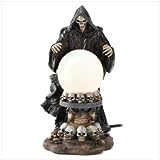 Grim Reaper Skull Conjurer Crystal Ball Table Lamp
Take a supernatural approach to home design with this crystal ball Grim Reaper lamp. Add a little hocus pocus to any room in the house. From Amazon: "You'll shiver at the sight of this frightening light, depicting the Grim Reaper deep in thought as he gazes into his crystal ball. Perhaps he's seeking his next victim; only you will know the chilling truth!" Product Information Weight: 3 lbs. Materials: Polyresin base glass ball. Included: Light bulb Size: 7" x 6" x 12 1/2"
Buy Now

Video tutorial to teach you how to make your own Grim Reaper for your yard.

Airblown Animated Giant Reaper Rider and Horse
The apocalypse seems to be upon us as death, one of the four horse men, takes a stroll on his black steed. This animated inflatable horse and Grim Reaper is enough to raise a chill down the spine of any spectator that passes by your yard. Product Details Animated: Reaper's head moves up and down Lights: The Reaper lights up Set up time: Reaper self inflates in minutes Uses: Indoor and Outdoor Pros: Weather resistant and comes with tethers and stakes
Buy Now

Comments About the Reaper - Do you believe the Grim Reaper exists?