Halloween Crafts for Kids and Toddlers

Fun Crafts for Little Ones

Looking for some fun activities to do with your toddler this Halloween? Here are the activities I did with my two-and-a-half-year-old, so that I could share the holiday with her in a friendly - and not scary - way!

We used paint, glue, glitter and other fun mediums to create iconic Halloween images, and we even had a sensory bin in traditional Halloween colors. Let your imagination run wild and add some friendly fun to the holiday this year!

Potatoes make great "stamps" for projects like this, since they're so easy to cut and carve.

Start with a baking potato and cut it in half. You could just stop at this point, and make oval-shaped orange stamps, drawing on the jack o' lantern face once the paint dries.

I decided, however, to carve the face from the potato half. I very carefully used a sharp paring knife to carve the pattern.

Let the pumpkin stamp sit out for awhile, to let it dry. The natural moisture doesn't mix well with the paint. I let mine sit for about 30 minutes or so, and that was enough.

Then I put some orange tempura paint in a tiny paper plate, spread some newspaper over the table, gave my daughter some paper, the stamp, and let her go to town!

I mixed in orange Tic Tacs for a Halloween color pattern of black and orange. There was a nice contrast, but the Tic Tacs didn't last long once my daughter realized they were candy, and that they tasted "yummy."

Anyway, I combined the beans and candy in a pan. I found a package of "critters," which I referred to as our "Halloween bugs," and buried them in the bean mixture.

My daughter spent many, many hours over many days digging up the bugs, reburying them, and digging them up again.

And eating the Tic Tacs.

This is a very simple concept, and very easy to set up, but it produced so many smiles!

I bought some cheap shaving cream in an aerosol can and sprayed most of it into a cookie sheet. I smoothed it down with my fingers.

Then I provided a ghost cookie cutter for inspiration, and to let my daughter play, but then demonstrated that she could draw her own ghosts by dragging her finger through the cream.

You can easily smooth it down to let them start all over again.

It has a funky feel and is enjoyably messy, so this activity was all giggles.

Cookie Cutters - My ghost cutter comes from this set.

For this, we used the same cookie cutter featured above in the Shaving Cream Ghosts project.

I provided a small, paper plate filled with white glue, which we dipped the ghost cookie cutter into and then stamped onto black construction paper. This contrast of the white against the black looks great, but the glue dries clear. So we added glitter. Of course.

I actually intended to use silver glitter, but couldn't find it at the last minute and so used gold instead. This didn't really matter to my daughter. Adding the glitter was her favorite part.

Though she did also enjoy placing on all the googly eyes. The texture of the glitter with the movement of the eyes made it especially fun. 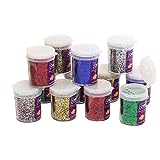 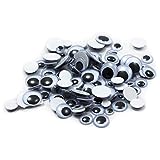 These are very easy for little hands to help make, and although it's a very simple construction, it looks neat when they are hung all over the living room.

I used regular, white, square napkins. I opened up one napkin, crumpled another into a ball (which became the head), and placed that ball in the center of the open one. Then I wrapped the open one around the crumpled one, and tied some yarn around that to make a neck.

Then I drew on eyes and a mouth with a permanent marker, and hung the ghosts with the other end of the yarn from various objects around the house.

My daughter could do much of it herself, and crumpling napkins into a ball was especially entertaining. I just didn't let her get a hold of the permanent marker. Those things don't mix well with toddlers. 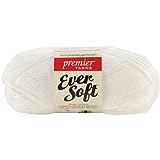 Which Is Your Favorite Halloween Craft?

Leave a Note! - Let us know what you think!