How to Make and Keep Your New Year Resolutions

With the seriousness of a pledge made with Scouts (or Girl Guides) honour, many persons end the old year by making well-meaning resolutions about how they will:

3. Do something new or differently.

4. Do more or less of something.

With the good feelings and festiveness of the Christmas season, they feel invincible and able to accomplish anything!

However, as the days in the New Year move farther away from January 1st, those New Year resolutions seem impossible to accomplish as they settle back into the doldrums of life, living and its often tiresome routines.

Starting off on the ‘right foot’ is the key to making a good, solid and accomplishable New Year resolution. In order to do this, it is important to remember two (2) things:

2.Go for the low hanging fruits first: In other words, start with one (1) or two (2) resolutions that are both manageable and realistic. For example, if you currently smoke six (6) packs of cigarettes per day, then don’t make a New Year resolution that states, “I will quit smoking this year!” A better New Year resolution would be to reduce your smoking from six (6) packs a day to four (4) or five (5) packs a day.

Now that’s both manageable and realistic because:

a.You will more likely be able to succeed at leaving of a pack or 2 of cigarettes a day than all six (6) packs.

b.You won’t be experiencing drastic withdrawal symptoms because of moving from six (6) packs to zero packs per day and be tempted to just fold in on your New Year resolution.

Then once you’re comfortably down to 4 or 5 packs a day, you can give yourself a bigger challenge later in the year or next year by leaving off another pack or 2. So you’ll be down to about three (3) packs per day and now you’re half way through to your ultimate goal of quitting smoking.

See how easy it is when you make a good New Year resolution; one that’s both manageable and realistic?

How to Set Goals and Achieve Them: The Self Help Bible Singles. Personal Development Essentials (Volume 2)
Learn more about setting and achieving your goals any time of the year.
Buy Now 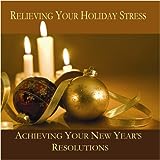 Relieving Your Holiday Stress and Achieving Your New Year's Resolutions
Win the battle to be the new, improved YOU in the coming year.
Buy Now

It’s easy to make New Year resolutions but keeping them is the hard part!

Many people fail at keeping their New Year resolutions, not because they are not good resolutions but, because those resolutions are so drastically removed from their everyday HABITS that they become impossible to accomplish. Let me explain.

If, for example, you haven’t been exercising at all, then you make a New Year resolution that states, “I will tone my midriff/stomach in the New Year!” you cannot immediately move to being able to do 100 sit ups a day. You’ll be lucky if you complete 10 sit ups on your first day.

So in order to ensure that you succeed in keeping your New Year resolutions this year, here are two (2) very useful and important guidelines:

1.Be persistent! You have to keep doing what you resolved to do until it becomes a habit, even when you are not initially seeing results. Remember, “A winner never quits and a quitter never wins”. So being persistent is the best way to ensure that you win this year with your New Year resolution!

2.Be consistent! If you committed to carrying out certain tasks related to keeping your New Year resolution daily, weekly, every other day or whatever other period, then make sure you keep doing it every time. Even if you miss a few times, the important thing is to start up again doing it consistently until it becomes a habit. Remember, “Temporary defeat is not permanent failure”. Just because you missed the mark a few times doesn’t mean you have totally failed at keeping your New Year Resolution. Just start again and keep going.

What's YOUR hope for the New Year?