Laws and Guidelines for Civilians Displaying the American Flag

Will You Display Your American Flag on Memorial Day?

More and more people in this country honor and celebrate our flag, and its history. Our neighborhood seems to fly our flags on every special day. Some fly their's every day. Independence Day (July 4) for 2015 is on a Saturday, which will make it easier for many people to have their celebrations.

Flag Day, which is on June 14 every year; and Memorial Day on the last Monday of May each year, are two of the days each year that we make a concentrated effort to do this. My husband and I live in a neighborhood of transplants, that is, all of us have moved here from somewhere else, whether other states in the U.S. or other countries. Many of the homes in our neighborhood have flag poles in their yards, and some people display not only the American flag, but also the flag of their home state just beneath the U.S. flag.

How will you honor the flag on patriotic holidays? Our family will display our flag on the front of our home. There are laws and guidelines for civilians displaying the American flag, and how to handle the flag. In this lens, I will share some those with you.

Some Additional Dates to Display Your American Flag in 2015:

A Little History About All Those Rules

I Found This Flag Being Flown Without Illumination -- A Real No-No!

There are rules for displaying the American flag. For example, when flown at night, It should be illuminated.

President Franklin D. Roosevelt approved House Joint Resolution 303 on June 22, 1942. That resolution codified the existing customs and rules governing the display and use of the flag of the United States by civilians. The new law included provisions of the previous code that was adopted on June 14, 1923, by the National Flag Conference, held in Washington, D.C., and, with some amendments and additions, was approved on December 22, 1942.

About this photo, there was some light from a near-by building, and I used a flash with my telephoto lens. Otherwise, the flag would be in complete darkness.

The Rules Most Commonly Needed by the Average Citizen

The flag represents a living country and is itself considered a living thing. It should always be allowed to fly freely, never encumbered in any way. This is highly symbolic of our freedom as American citizens.

Must the Flag be Taken Down at Sunset? Or When it Rains?

The American flag is generally flown from sunrise to sunset. It is, however, acceptable to fly it at night if it is properly illuminated by a spotlight or some other lighting mechanism that is focused primarily on the flag.

I once lived down the street from a retired U.S. Marine who put out both the American flag, and the Marines flag every morning, and took them down every evening. Beginning on September 11, 2001, I put our flag out and left it out for about a year. Now I display it in the days surrounding Memorial Day, Independence Day, Labor Day, and Veterans' Day.

The Flag Code states, "The flag should not be displayed on days when the weather is inclement, except when an all-weather flag is displayed". The custom of taking down the flag during inclement weather began before the invention of synthetic fabrics that could withstand severe weather. There is no hard-and-fast rule or law about simple rain.

Have you ever wondered why our flag has the colors it has?

Our flags colors were not chosen randomly. There is, however, disagreement about how they were originally chosen. I have always been taught that red represents the blood shed to protect all of us who are citizens of this great nation. White represents purity. Blue represents freedom and liberty. I also heard once upon a time, that the white represents the snow at Valley Forge, and how the men suffered that long, hard winter.

Need a New Flag and Banner Pole? - This is the type we use on the front of our home. 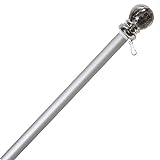 Will you be displaying the American flag on Memorial Flag Day, July 4 (Independence Day), Labor Day, or Veterans' Day? Maybe on all of them? Do you fly your flag year-round?

If you have more information about the laws regarding our flag, please feel free to share them. I will be glad to add them to this page. Thank you for visiting, and Happy Flag Day, Happy Independence Day, etc.

How Do You Display Our Flag? - Assuming, of course, you are an American citizen, or that you live here.