Get Inspired with "Ideas for Writing Creative Christmas Letters"

Finally someone has written a book that celebrates the joys of Christmas letter writing and encourages others to get creative with their annual updates. Ideas for Writing Creative Christmas Letters (That People Are Actually Eager to Read!) by Janet Colbrunn is published by Baycourt Publishing, and it's full of great ideas to help you create holiday letters that you'll enjoy writing and enjoys will enjoy reading. Here's my review of this great book.

(Image of book cover provided by amazon. See link below.)

I purchased Ideas for Writing Creative Christmas Letters That People Are Actually Eager to Read by Janet Colbrunn because I needed some inspiration for my yearly Christmas letters. I had no idea what I was getting because Amazon didn't offer a description and I couldn't find one anywhere else either. But it turned out to be a great resource.

I finally found an official website for the book that says, "You can quickly learn to transform a traditional letter into one that is so entertaining that even the busiest holiday reveler can't lay it aside." And that's no lie from the marketing department. I actually had a good time reading the sample letters, even though I don't know the author or the family she was writing about. Colbrunn's examples show just how fun and creative Christmas letters can be.

The writer doesn't just provide a laundry list of ideas. She provides concrete examples of real letters she has sent during the holidays, from the 1988 Diary letter to the 2005 End of Year Statistics letter and many others.

My personal favorite was the 1995 trivia game that included a game board with questions and answers about things such as a graduation party that turned into a surprise birthday party. I also like the holiday letter that was a series of fake letters to Santa Claus and the "2003 by the Numbers" letter that included info such as:

3 times we visited the Toledo Zoo with friends and family. The kids liked the monkeys best

30 toddler teeth brushed at the beginning of the year

60 toddler teeth brushed at the end of the year

You'll find a brief explanation of each letter in the book along with work space for you to start your own creations. Some of the other examples you'll find inside:

- Format letters to disguise your update as a crossword puzzle or a board game. (Both very fun!)

- Perspective letters that appear to be written by the baby, the family pet or a guardian angel.

If you aren't inspired to write more creative Christmas letters after reading Ideas for Writing Creative Christmas Letters That People Are Actually Eager to Read, you must surely be a Grinch.

If you'd like to purchase this book, it's available from Amazon.

Ideas for Writing Creative Christmas Letters: That People Are Actually Eager to Read!
This paperback has nearly 100 pages of advice and examples for writing creative Christmas letters.
Buy Now

One way to get creative with your annual Christmas letters is to use a fun Christmas letter template. Templates are downloadable documents that are already have a Christmas design and are ready for you to add your own text and photos. Rather than buying traditional stationery and then trying to print your document on the stationery, guessing where you need to place the text and photos, templates are saved as Microsoft Word documents so you can see a preview as you work.

You can find printable Christmas letter templates (such as the one shown here) at Christmas Letter Tips.com and other online sites.

Get Creative with Newsletter Cards

Include your holiday letter right in your Christmas card

These holiday cards from Pear Tree Greetings have room for you to include your family's news right in the card, giving another creative option for your annual letter.

Snapshots of a YearCHECK PRICE

Of course, not everyone will read Janet Colbrunn's book or take her advice to successfully transform their dull holiday letters into readable works of art. There will always be people who write awful holiday letters. This book provides examples. 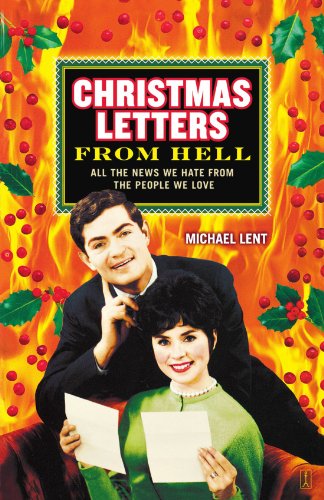 Christmas Letters from Hell: All the News We Hate from the People We Love
From Amazon: Who doesn't love to open the mailbox during the holidays and find a newsletter? Whether it's a juicy missive from a college roommate inadvertently revealing her husband's wandering eye, a self-congratulatory account of a cousin's rise to power at the local fast-food joint, or a mind-numbingly detailed account of a year's medical ailments (including photos) from a coworker, they're always entertaining. Christmas Letters from Hell skewers holiday letters of all shapes and sizes, from the ones that come crammed with cheesy graphics or written from the perspective of the recently neutered family dog to those filled with stories of "perfect" family vacations that were clearly anything but. Here Santa uses his holiday letter to let the elves know that he'll be outsourcing to China effective immediately; a bipolar mom tells two very different versions of the year's events; and Osama bin Laden touches base with his high school host family in Minneapolis. Christmas Letters from Hell serves up a steaming, savory blend of the holiday cheer, humor, and twisted truth in our well-intended attempts to stay in touch gone horribly, horribly wrong.
Buy Now