Angelina Jolie's take on Maleficent involved many hours of makeup to get her to achieve this new iconic look for this misunderstood fairy queen.

From the prosthetic cheekbones, inspired by Lady Gaga, and her creepy contact lenses, hand painted by contact lens artist Cristina Patterson, down to her uniquely colored nails, inspired by Christian Louboutin, Angelina Jolie worked with her own personal stylist Toni G and a design team to create a character that is beautiful and terrifying at the same time.

I've been inspired by this new version of Maleficent to create my own version of the costume to wear at Disneyland Halloween. After looking at how to make her horns and the various different views of her costumes, I have also figured out the details of Maleficent's unique makeup and under mani nails.

Read on to find out more about recreating this new look for Angelina's Maleficent.

Maleficent's Face - The Look of Evil or Beauty?

Angelina Jolie's stylist, Toni G., estimated they used three tubes of this special color of MAC’s Pro Longwear Lipglass during the filming of the movie. 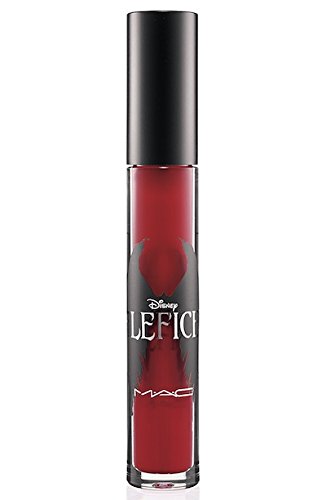 There are several different aspects of the makeup used to create this unique fairy queen look.

The makeup team for Maleficent wanted her to be beautiful and terrifying at the same time, but not too creature-like.

Instead of going with the traditional green skin seen in the cartoon version (and popularized more recently by Elphaba in "Wicked") they opted for normal to white skin, enhanced green contact lenses and bright red lipstick.

In the stylized promotional photo's and posters done by Mert and Markus Angelina's skin is so pale it is white.

Throughout most of the movie her skin is a normal to pale color. The only time she even hints at being green in this file is during the Christening scene when she takes on a green hue from the green flames as she casts the curse.

Angelina's make up artist, Toni G use a MAC Select Cover Concealer applied with a wet sponge in a color that was lighter than Angelina's natural skin tone to get that pale effect.

The make up team did not use blush, but did use contouring or a sculpting powder (MAC Sculpting Powder) to help accentuate her prosthetic enhanced cheekbones and according to Moviefone News then use the normal beauty principle of highlighting "the upside down triangle under the eyes to the outside part of the cheeks to the bottom of the nose."

There are a lot of amazing video tutorials showing how to get the look of Disney's favorite evil fairy. Here are just a few of the tutorials for getting that Angelia Jolie-inspired evil fairy look. 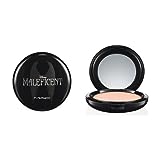 Use the beauty powder as a base for the face makeup. 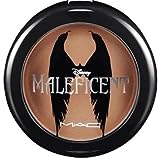 Use the sculpting powder to create definition and facial contours.

More on the Makeup in Maleficent

This special collection comes with Maleficent's fairy wings on the packaging and is guaranteed "to delight the most demanding of dark sorceresses." The collection consists of:

With the collection (or at least the colors of the collection once the limited-edition runs out) you can recreate this beautiful and terrifying new iconic look for yourself.

Recreating the Maleficent Look with the MAC Line

To recreate the look from the MAC Collection they recommend using the following MAC products:

The four eye colors used to create Angelina's eye look are from MAC:

Details on how the colors are applied are in the section above this one.

Use the four eye colors to recreate the golden glimmer eye.

Add on the false eyelashes to create the long, thick lash look.

Define your eyebrows with the FLING colored pencil (also available as a regular pencil).

Eyes Inspired by Goats and a Rock (Labradorite)

The team looked at goats to help create the creepy, sinister look for the evil fairy. With their have horizontal, slit-shaped, rectangular pupils (seen to the right) and very pale iris (yellow brown or blue), looking at a goat can be a bit alarming and unsettling, most likely the effect they were trying to achieve with Maleficent (at least in her evil stage). There are perhaps hints of a horizontal pupil in the movie stills above, but most of the alarming results seem to be coming from the light coloring of the irises of the eyes.

According to Fashionista, Toni G was inspired by the metallic colors of the labradorite stone (seen to the right) and the iridescent play of colors (technically labradorescence) seen when holding the stone. (It looks a lot like an oil spill). The labradorite colors found their way into the makeup shadows, the staff and also into the contact lenses.

Angelina's contact lenses were hand painted by contact lens artist Cristina Patterson, bringing in colors from labradorite. She worked with the colors already in Angelina's eyes, but incorporated colors from the laboradorite.

According to a Wired Interview to make these menacing contacts Patterson incorporated "at least four blues, three greens, two oranges, and one pink" when painting the lenses.

Light green-yellow contacts are likely to become a Halloween and cosplay trend, but I am not sure about the (horizontal) goat eye.

Maleficent Lips in different colors from Disney's Maleficent on Facebook.

If you look at the lipstick you notice it is a blueish-red lipstick, without a hit of orange or pink. The color they chose to use was MAC’s Pro Longwear Lipglass in Anthurium.

Angelina's personal stylist, Toni G., estimated they used three tubes of the Anthurium color during the entire filming of the movie to keep the dark fairy's lips a deep shade of red.

The red lipstick makes her white teeth stand out even more.

In addition to her blood red lipstick, perhaps to make the character a bit more like a creature they applied tooth veneers to create sharp, pointed bicuspid molars.

(You can see these pointed teeth when she smiles in the photo near the bottom of this page).

Note: As part of the MAC Maleficent collection created for the movie, a lipstick with the blue undertones, called "True Love's Kiss." This lipstick puts to shame the red, red rose. To recreate the look according to their directions the lipstick is applied first, then the lipglass.

Anthurium is the lip color used for Maleficent's red lips.

Anthurium was the color used for Angelina's lips, not an orange, not a pink but a true red.

Use the lip pencil in the color of Kiss me Quick to help line and define the lips.

The very popular color is a red that will "shame the red, red rose."

The deep red lipstick inspired by the film from MAC. Available for a limited time.

What should the name be of Maleficent's Bone and Red Nails?

Maleficent's Nails look to have been inspired by Adele's Christian Louboutin* two color (upper and underneath) manicure that she sported at the 2012 Grammys.

Maleficent's two-colored nails are revealed during Aurora's Christening, the moment that she goes over to the dark side.

Three MAC nail lacquers were created for the movie by Angelina's make up artist Toni G, Nocturnelle, Flaming Rose and Uninvited, which are available as limited editions.

*The traditional Louboutin look is based on the iconic shoes with black on top and red underneath.

Blinging out the underside of one's nails is one of the new nails trends, perhaps inspired by Maleficent's nails.

Nocturnelle, Flaming Rose and Uninvited are the Nail Colors.

In looking through the movie stills of Angelina's hands, I wasn't able to find any that had her nails painted black on the underside which was reported in some of the reviews of the makeup for the movie.

It does look like the Nocturnelle lacquer (black) is finding it's way to some of the Maleficent Premieres.

At both the Hollywood and in China Angelina can be seen wearing a black-on-black manicure (black top with black underneath) in place of the red (Flaming Rose) seen in the movie.

This is a variation on the Louboutin Nail (named after the iconic red-soled shoes) or as USA today is calling it an Under Mani.

I think this is a new (or reinvented) manicure look is going to catch on and be very popular, both with the red and the under color (mani) as well as others.

Recreate Maleficent's two color nails from the movie with bone on top and red underneath.

The three colors of nail lacquer used to create the nails for the movie. 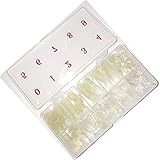 If you want to use artificial nails which may be easier for creating and shaping the nails, this set of 500 offers an abundance of nail sizes and tips in a handy box to keep them sorted. 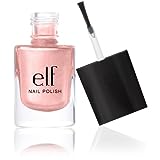 Nude (or bone colored) nail polish for the top.

Red (Smokin hot) nail polish for underneath the nail for the Christening scene.

Maleficent's cheekbones were inspired by Lady Gaga's facial bones from the "Born this Way" video.

Initially Angelina wanted to try to create an effect that was a bit like an animal her own facial bones protruding from her forehead, but the special effects makeup artist Arjen Tuiten and her personal makeup artist Toni G eventually came up with the iconic look that you see now.

In addition to her kudu/antelope/goat like horns, she also wore prosthetic on her cheeks, a bit on her nose and her pointed ears. According to makeup effects designer Rick Baker the prosthetic pieces were less than a quarter of an inch at their thickest parts, so they just enhanced or defined her normal features.

The easiest way to create prosthetic facial bones is to create a clay mold and then build up liquid latex over it, layer upon layer leaving the latex to dry completely in between. Or you can just stick to facial contouring using makeup.

If you look at the image to the left you can see that she has sharp, pointed bicuspid molars. Most of the tooth veneers now are to recreate vampire fangs, not bicuspid molars. Perhaps some will be released in time for Halloween.

See a video demonstration on using a clay mold with liquid latex. 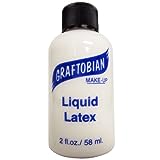 Create your own prosthetic molds by using the clear liquid latex over a clay mold to build up prosthetic cheek bones.

Apply the finished latex prosthetics when you are ready to get dressed up, then put makeup on over it.

What do you think about this new look for Maleficent?