Make an Easy Minion Costume from Despicable Me

One of the favorite costume characters of Despicable Me fans is dressing up like one of the silly minions. Pulling together a basic minion costume is easy, especially if you already own a pair of denim overalls and goggles.

The minions have been a popular Halloween costume since these silly yellow pill-shaped incoherently-babbling scene-stealing sidekicks first debut in 2010. Fortunately they are back crazier than ever in Despicable Me 2.

I've pulled together a Do it Yourself costume version, so you can assemble your own yellow minion costume. The hardest decision may be whether to be a one-eyed or a two-eyed minion. There are even new options for girls.

Meet the Minions on Video

In case you don't know the minions you can meet Gru's "cousins" in this clip from Illumination Entertainment introducing the Minions.

I've always found it more fun to make or put together costumes than to go out and buy a pre-made option. These versions are more fun for the kids to do to, since they can help in creating their own costume.

Pulling together a basic yellow Minion Costume (these are the good guys, not to be confused with the new purple evil minions is pretty easy, you just need to assemble the costume pieces listed below.

Start with a pair of denim overalls. Be sure to add in the "G" logo for Gru that identifies all of these good minions. Look at the picture to the right or large minion picture below to see what the Gru "G" looks like.

Wearing a yellow shirt and yellow beanie or swim cap will help cut down on the amount of yellow face paint you need to apply (or you could even get by without any face paint and just let the yellow top and cap work). You will want to get dressed (except for the gloves) and get your shoes on before doing your face paint.

For the final touches, put on your goggles and pull on your gloves and get your grin on.

Adopt a Bunch of Minions

We've adopted a bunch of minions for our home. These silly toys can often be found riding in the back of the car, peering out the window.

Vote on Your Favorite Minion Look

Which minion look is your favorite?

Starting from top to bottom here are a list of the items needed to convert yourself into a fun-loving minion, some of the items (like the overalls or yellow shirt) you might even have at home.

If you want to make yourself look bald like the minions, then you need to start at the top, with a bald cap. Even better, use a yellow beanie or swim cap and a great part of your head is already yellow.

With a yellow swim cap, you already have a yellow head.

A yellow beanie is another way to create a yellow headed minion.

Marie LeBaron, founder and managing editor of Make and Takes, shows an easy and cute way to customize a yellow knit hat, snow hat or beanie and turn it into a minion head with paper towel roll goggles.

The yellow minions are all yellow, so you will need to cover your head and your skin in yellow face paint. Starting with a yellow cap or beanie and wearing a long sleeved turtle neck top means there is less face paint needed. 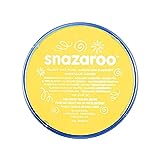 The official Despicable Me Masks make it easy to become a one-eyed or a two-eyed minion. 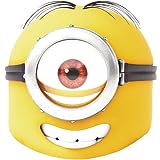 Wear a one-eyed Stuart mask to complete your minion costume. 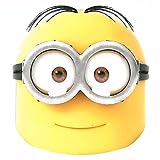 Wear a two-eyed Dave mask to cover your own face.

Getting a two-eyed goggles is much easier than getting a one-eyed version.

The official Despicable Me minion goggles will help you complete your costume. 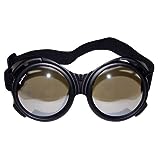 These were the pair that I got for us.

The Despicable Me website has printable minion goggles, both in a one-eyed and a two-eyed version. Just download, print, and assemble and you'll have a your own pair of minion goggles.

This may be the best option for getting a one-eyed pair of minion goggles. 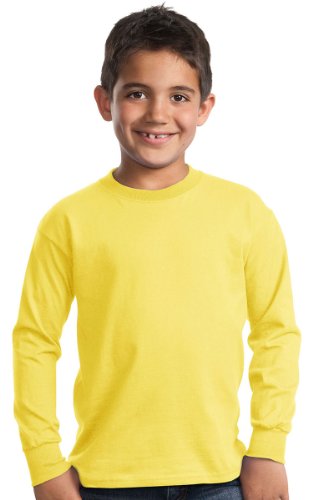 Don't forget to put the "G" Gru symbol on the overalls.

Some of the websites where I was able to find Gru's "G" logo. You can draw it on the overalls, or if you want to reuse the overalls for something else, create one out of felt to temporarily attach to your overalls.

Image by Eva Rinaldi. Used under a Creative Commons License

You may want to watch a few minion video clips to get some of their key phrases down. Here are some of the minions favorite words and phrases (listed alphabetically):

Throw on a Minion Face shirt and you have an instant Minion costume. The hardest part is picking a favorite expression (and that they only come in kids and teen sizes).

A silly minion shirt for teens.

Minion Costume Made for Girls, Tweens and Women

For Despicable Me 2, they have released officially licensed minion costumes for girls and for women. I am glad that they've recognized that girls like the minions too and want a costume of their own (that isn't Agnes or Margo).

This officially licensed Despicable Me 2 costume comes with the dress which is fashioned to look like a minion outfit with yellow top, and denim overalls only in skirt form.

It also has the black stretch-knit gloves, a yellow headband, minion goggles and a pair of black knee-hi stockings.

When I asked my 11-year-old what she thought of this version, she didn't think it was age appropriate. (The skirt was too short). She did, however, like the version for younger girls.

Now I am off to work on a DIY version, that is more appropriate. Check back for updates.

Minion Costumes for Kids on eBay

If you'd rather get a pre-made minion costume, they are available on Amazon and also on eBay.

More on Despicable Me 2 - the Latest Minion Adventure

The fun-loving mischievous minions have reappeared in Despicable Me 2.

What do you think about the Despicable Me Minions?