Symbols and Traditions to Celebrate The New Year!

Symbols and Traditions to Ring in The New Year!

The celebration of the New Year is one of the oldest of all our holidays. It was thought to have first been recognized about 4000 years ago, in ancient Babylon. Most of our current New Year's traditions derive from ancient rituals, or superstitious beliefs. They are often designed to protect us from evil spirits, and bring us good luck and prosperity throughout the coming year.

The burning of the yule log, firework displays, New Year's Eve parties, images of Father Time and Baby New Year, and specially designed fruit platters are just a few of the many traditional symbols associated with the New Year..

Good Tidings for The New Year

1. The Yule Log is a noteworthy good luck symbol in New Year celebrations.

The Yule Log symbolizes the light coming back to conquer darkness. It is an important part of the New Year's celebration and also gives a traditional touch to it.

The log is decorated beautifully after being dragged to the fireplace. It is adorned with soft, red ribbons and glitter to add that extra zing to it. Traditionally, the log should burn for one whole night, smolder for twelve days (signifying the twelve months) and then be put out ceremoniously.

2.Father Time is one of the most significant symbol used in New Year Eve celebrations in several countries around the world and US in particular.

The common image of Father Time is that of an old bearded man dressed in a robe wearing a sash across his chest with the previous year printed on it. A personification of time, Father Time carries an hourglass or other timekeeping device and a scythe.

This particular image of Father Time is said to have been derived from several sources, including the Holly King - the Celtic God of the dying year, and Chronos - the Greek God of time.

The Father Time hands over his duties to the Baby New Year, which is the symbol of "New Year" and is depicted as an infant wearing a sash with the new year printed on it. Father Time and Baby New Year thus serve as metaphors for death of one calendar year and the birth of a new one.

The tradition of using a baby to signify the new year was begun in Greece around 600 BC. It was their tradition at that time to celebrate their god of wine, Dionysus, by parading a baby in a basket, representing the annual rebirth of that god as the spirit of fertility. Early Egyptians also used a baby as a symbol of rebirth.

Although the early Christians denounced the practice as pagan, the popularity of the baby as a symbol of rebirth forced the Church to reevaluate its position. The Church finally allowed its members to celebrate the new year with a baby, which was to symbolize the birth of the baby Jesus.

The use of an image of a baby with a New Years banner as a symbolic representation of the new year was brought to early America by the Germans, who had used the image since the fourteenth century.

Grapes and lentils are said to ensure prosperity.

The moment the clock strikes twelve at midnight on December 31st, people in Portugal pick and eat twelve grapes from a bunch so that all the twelve months in the coming year are full of happiness and prosperity.

In Brazil, they eat lentil soup or lentils and rice so that they usher in prosperity and well being.

Pomegranate fruit is associated with fertility and abundance.

Mistletoe is considered a good luck charm. Hence in several places, the New Year's table is often decorated with a sprig of mistletoe.

4.Bursting fire-crackers and noise making fire-works are a popular image of New Year celebrations. It is said that use of noisy fire works on New Year's eve emerged from a popular belief of olden times that noise and fire helped to dispel evil spirits and bring good luck.

Different countries follow different traditions and customs related to the superstitions of chasing away of evil spirits. This is done so that the bad experiences of the past are forgotten and one starts afresh and hopes for the best in the coming year.

In Australia, January 1st is a public holiday and at midnight, on New Year's Eve, people make a cacophony using whistles and rattles, car horns and church bells to chase away evil spirits. The next day, the warm weather encourages outdoor activities, such as picnics, camping, rodeos, and surf races.

5.Traditionally, it was thought that one could affect the luck they would have throughout the coming year by what they did or ate on the first day of the year.

For that reason, it has become common for folks to celebrate the first few minutes of a brand new year in the company of family and friends. Parties often last into the middle of the night after the ringing in of a new year.

It was once believed that the first visitor on New Year's Day would bring either good luck or bad luck the rest of the year. It was particularly lucky if that visitor happened to be a tall dark-haired man. Such a visitor should be greeted in warmly and treated generously. It is even better if he gets a gift for you. Some of the luckiest gifts include a silver coin, a lump of coal, piece of bread, etc.

Blondes and Redheads are supposed to bring bad luck, so keep them away. Also, it is bad-luck if a woman enters your home first, so try to keep them away too, even if that requires not opening the door! 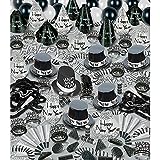 50 New Year's Resolutions: How to Make Them, How to Keep Them
Buy Now

How will you celebrate the New Year?