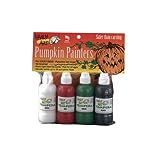 Painting pumpkins has become an increasingly popular activity, one attracting everyone from children to serious artists.

And since pumpkins are available in the later growing season in many parts of the world, it is also associated with autumn and Halloween, which helps define the subject matter being painted on them.

Even so, there are a lot of exceptions to that general rule, and many artists go beyond the season to create some fascinating works of art unrelated to Halloween or fall.

In this article we'll focus solely on pumpkin painting art works that are related to the autumn and Halloween season, as there are a wide variety of designs to get inspiration from and enjoy viewing.

Even in that niche there are some pumpkin paintings which could be considered neutral in that they are of faces that could be applied to any number of situations.

We'll start off with a great group of painted pumpkins, any of which would be great for the Halloween or fall season.

I personally like them because they provide such a nice variety of facial expressions for anyone to choose from, depending on the purpose for the pumpkin.

And as you can see, they look awesome as a group, and anyone that has a little skill as an artist could take an easily identifiable characteristic of a family member or friend and paint pumpkin faces in a setting that everyone would recognize and get a good laugh out of.

For example, someone may have a mustache, mole, or wear a certain type of makeup or other such thing, which would be easy for people to exaggerate in a way that brings delight to those viewing them.

Another thing to garner from this group is the different ways the eyes, noses and teeth were drawn. Add to that the various furrowed foreheads which determined whether someone was happy, sad, mad, or evil, and you have a complete example of how to paint pumpkin faces.

Painting a Lot of Pumpkins

Whether you're going to paint a small or a large pumpkin, if you're going to do a lot of them, below is a photo of a large number of them with a similar design, but one that differentiates with each pumpkin, allowing for a quick, but unique set of pumpkins.

The two things that all of them have is the red cheeks and triangular nose. From there they change in looks in the eyes and mouth.

With the eyes, they are either circular or triangular in shape, with the black part of the eyes differentiating in their placement, with some looking down, others sideways, and yet others straight ahead. There are even a couple that are looking cross-eyed.

For the mouths, there are circular or straight, pointed lines, with each one having a little different design. For example, in the front row you have the two on the end with curvy lines for the mouth, with one having a tooth and the other not having one.

And for the two middle ones in the front and second row, you can see the one in front having the lines crossing the mouth, while the one right behind it is free of those lines.

Finally, the eyebrows of the pumpkins are different, with some having the X design and others he slightly curvy lines. Those with the curvy lines are each different according to the facial expression on the pumpkin.

Painting a Pumpkin Yellow with a Face

Although it's far from the only design used to paint pumpkins during the Halloween season, painting faces on them is a lot of fun, especially when the artist has the ability to create faces that are a very interesting to look at.

That's the case with the pumpkin with a yellow paint base, and the delightful and colorful dots on the sides of the face. You get a festive feel from that particular design element.

The eyes are also very cool. For those wanting a couple of tips, just think of making the eyes circular, triangular or oval shaped, and them adding a couple of circles within to create the inner eye look, as you see below. You can also leave it blank inside with the exception of the iris. And for some variation, you can include an eyelid to make it a little more realistic.

For the nose, a simple triangle also works great, or you can make it a look like an actual nose, or one that has its own, unique shape.

The mouth can be a simple line; open with different shapes and teeth, or like this one, where the shape is just a couple of lines outlining it, along with the red tongue and couple of white teeth.

What's great about a pumpkin is you don't have to get the mouth and teeth exact, as it's expected to have some irregularities in the mouth.

In the next segment there are several pumpkin painting video tutorials made at various levels of difficulty.

There are some at an extremely elementary level; made specifically for children to feel part of things, and others made with the serious artist in mind.

Whatever the purpose for painting a pumpkin, there should be something for everyone looking to enjoy designing a pumpkin for the fall or Halloween season.

This next pumpkin painting is one of the more unique I saw, with what appears to be a pumpkin painted to look a little like a watermelon.

It's interesting in that watermelon's are usually among the last of the summer crops to be harvested as the autumn season commences. So to have one painted in a watermelon design on a pumpkin seems to be saying it's recognizing that transitional period into the Halloween or fall season.

Either way, it's a very unique and unusual pumpkin painting design; one that is sure to garner interest and comments to those viewing it.

Here we have a very cool depiction of Jack Skellington from "Nightmare Before Christmas" painted on a pumpkin.

The decision to do it in black and white was a good one, as some may have decided to get creative and add color to it, which would have taken away from the awesome look of Jack in black in white.

Jack's face and body were captured great, and you can feel his character in the painting as you could in the film. Great job.

Next we have another level of pumpkin art, one that is over extremely high quality; having a lot of time and effort skillfully put into it. The pumpkin has an orange base painted on it to allow for the painting to look even better.

The colors o the background is fantastic, as are the ghosts, which in the middle portion of the pumpkin painting, appear to be lazily floating around on Halloween night. Having the witch flying in the light of the moon, giving depth to the painting, is also a great job.

Oh yes. Did you notice that the design actually says the word "boo?" Very nice.

In what could be considered an anime or manga pumpkin painting, with this design there is a terrific image of what seems to a vampire in that unique art form.

The horns and wings look fantastic, as does the skeletal face of the skull. Typical of the art is the large eyes, which is one of the more common identifying factors of manga or anime.

I really like it and it would look great on a real pumpkin.

As you can see from these magnificent pumpkin paintings, there are an endless number of designs that can be incorporated into the art form.

There is something for everyone one at various skill levels; from the simplest to the most complex and detailed.

In the end, it's all about the enjoyment and art of creating something to share with others, and pumpkin painting is a great way to do that. And with a little practice almost everyone should be able to do just that for family, friends and visitors to the home.