Have you ever wondered how the tradition of carving pumpkins into jack-o-lanterns originated? Or where the word pumpkin came from? Or where pumpkins were first grown? Find out here! This page has answers to all your pumpkin history questions. Read on to learn more and brush up on your pumpkin facts before Halloween.

No one's quite sure where pumpkins came from, but they're though to have originated in the Americas. Pumpkin seeds dating back to between 7000 to 5000 BC have been found in Mexico, and scientists speculate that pumpkins have been grown in Mexico since this time.

According to MexConnect.com, both the Aztecs and the Mayans used pumpkins. The Mayans used the seeds and oil in sauces and carved the shells into drinking vessels. "Even today, Mexican cuisine relies on pumpkin seeds for some of its finest regional dishes, while the pulp is prepared at this time of year as calabaza en tacha, a Day of the Dead delicacy whose preparation begins in late October," MexConnect says.

The French later changed the word to "pompon," and the British further modified it to "pumpion." American colonists are responsible for changing the word once again to the word we now use - "pumpkin."

Every year on the last day of October, Americans display millions of carved pumpkins on porches and patios. But how did this tradition get started?

According to Irish mythology, it began with a man named Stingy Jack. According to legend, Jack invited the Devil to have a drink with him, but the man was too stingy to pay for the drinks, so he convinced Satan to transform himself into a coin. After he did so, Jack decided he'd rather keep the coin than buy the drinks, so he stuck it in his pocket next to a silver cross, which made it impossible for the Devil to return to his original form. Eventually, Jack tired of keeping the Devil trapped, so he let him go with a promise that the Devil wouldn't bother him for a year.

At the end of the year, Jack once again tricked the Devil. This time, he convinced Satan to climb a fruit tree and once the Devil was in the tree, Stingy Jack carved a cross on the tree trunk, once again trapping the Devil. The man only allowed him to come down after the Devil promised not to bother Jack for 10 years.

Eventually, Jack died, but the Devil refused to have someone in Hell who had fooled him twice. And God didn't want this trickster in Heaven either. So the Devil gave Jack a candle and sent him to wander the earth forever. Jack put the light in a carved turnip, and forever thereafter, his spirit was known as Jack of the Lantern. Eventually it was shortened to just "Jack-o-lantern." Traditionally, turnips were the gourd most commonly carved during Halloween in Ireland and Scotland, but when Irish immigrants came to North America, they discovered that pumpkins were larger and easier to carve. Thus was born the pumpkin jack-o-lantern! 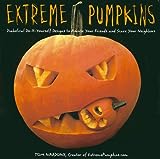 Extreme Pumpkins: Diabolical Do-It-Yourself Designs to Amuse Your Friends andScare Your Neighbors
Product description: Pumpkins are supposed to be scary! Based on his popular and addictive website ExtremePumpkins.com, Tom Nardone has created a full-color guide to pumpkin carving that's truly frightening. Featuring the website's signature Puking Pumpkin, and spanning everything from Drowning Pumpkin, Crime Scene Pumpkin, and Cannibal Pumpkin to Electrocuted Pumpkin and other never-before-seen designs, this gleefully gory guide is nothing short of a manifesto to take back Halloween from the cheerful, the cutesy, and the parent-sanctioned. For the egg-throwing, toilet tissue-streaming, window-soaping teenager in all of us, finally- a whole new way to celebrate October 31.
Buy Now

No-Carve Pumpkin Ideas
Carving pumpkins is a fun Halloween tradition, but it takes a bit of time and skill to create a great-looking jack-o-lantern. These no-carve pumpkin ideas ar...

Bestselling Kids Halloween Books
My kids love Halloween books. My son is old enough to read spooky books on his own, and my youngest one still enjoys having us read illustrated books to her....

Pumpkin Teeth For Your Jack-O-Lantern
Are you looking for something new and different to do with your jack-o-lantern this year? Do you like to have the coolest pumpkins in your neighborhood each ...

Pumpkin Poop Poem
I'm not sure when the idea of turning candy into funny "poop treats" by adding a silly poem became popular, but these days it's all the rage during...

Baby Princess Costume for Halloween
There's nothing much cuter than a baby in a Halloween costume, and if you've got a girl, a baby princess costume is a great choice. Whether you're looking fo...

Couples Disney Costumes for Halloween
Over the years, Disney has given us some great duos, from classic couples such as Mickey and Minnie and Lady and the Tramp to newer characters like Jasmine a...

Cool Pumpkin Holders and Pumpkin Stands
When I was young, carving pumpkins meant cutting out little triangles for the eyes and nose and carving a jagged smile, then putting the creation out with a ...

Did You Learn Something About Pumpkin History?