I remember trying Final Fantasy 7 for the first time back in 1997. Previously, I had played all available North American Final Fantasy games, including I, II, III and mystic quest. FF 1 was actually what hooked me into RPGs.

Final Fantasy VII was a huge deal, because it changed everything. Previous games were 2 dimensional main screen, although III did have 3D airship movement (sort of).

FF7 made everything 3D. Everything completely spun on its head. Gone were the side view fights, with your characters on the left and/or right side with enemies in the middle. Instead glorious (for the time) three dimensional fights and movement became the norm.

FF7 also marked Square (now Square Enix) departure from the Nintendo game console, and movement to Sony's Playstation. This meant that I too moved to Playstation, and continued with PS2 and PS3. My favorite franchise had moved and so had I. I still have not purchased a Nintendo product since the SNES. This also meant that FF was, for the first time, on disks instead of Nintendo cartridges. I pooled my allowance, as I was too young to have a job, leveraged what I could from my mother, and went out and bought a Playstation 1. At the time, I didn't realize they needed memory cards, so I had to leave my game on continuously, otherwise I would lose my place.

Finally, FF7 had fully rendered cut scenes, an amazing musical score, and story. Final Fantasy 7 music has been played fully orchestrated, and is amazing to hear. 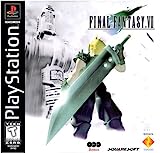 FF7 also marked one of the best villains that the series has seen, Sephiroth - as well as one of the best heroes, Cloud. It also marked one of the most dramatic deaths in the series (I would rather not say who, just in case) but it was tragic and very unexpected. No other entry in the series quite so permanently ended a main character like this. In FF VI, you can save Shadow. The character from V (not released in the US) were so generic, one was just like another. Even in FF IV (2 in US) it looked like you could revive the twins, Palom and Parom by using an item on them. Not so with VII. The character is simply dead. It was a hard lesson to swallow as a 15 year old. I was dumbfounded at first and just might have teared up a bit (but I will never admit that out loud).

30 year olds who played FF7 at the time would understand and appreciate the retro vibe they get, playing their favorite old-school RPG. Final Fantasy's graphics haven't aged well, but the story is still great, the customization and fighting are still top notch.

Definitely worth a trip down memory lane. Don't miss it!

Okay, so the graphics have not held up so well since first released, but the cut scenes are still passable.