Rudolph the Red-Nosed Reindeer is the longest-running holiday special in television history, but Rudolph has a lot of other history behind him, too. Originally created in 1939 as a promotion for Montgomery Ward, Rudolph has been the star of his own comic book, was drawn by the popular kids' author and illustrator Richard Scarry, and appeared in another (now mostly forgotten) animated film directed by legendary producer Max Fleischer. What don't you know about Rudolph? Read on to learn more.

Rudolph was Created as an Advertising Giveaway

Rudolph the Red-Nosed Reindeer was created in 1939 by Robert May, who was an advertising copywriter for Montgomery Ward. The company had been buying and giving away coloring books each year and decided they could save money by creating their own book. So May wrote Rudolph the Red-Nosed Reindeer, and it was illustrated by Denver Gillen, who also worked in Montgomery Ward's advertising department. The back cover of the book said, "Montgomery Ward wishes you a Merry Christmas."

Was Rudolph a Drunk?

According to Toonopedia, Montgomery Ward execs didn't like the idea of a red-nosed reindeer because they thought it implied drunkenness.

Rudolph was a Film Star Before 1964 - His first animated movie

The well-known 1964 TV special created by Rankin/Bass was not the first animated movie starring the famous reindeer. An earlier version, released in 1944, was the last cartoon directed by Max Fleischer, the producer behind the Popeye and Betty Boop cartoons that were popular from the 1910s until the 1940s. In this version, Santa's sleigh nearly collides with a plane and Santa's reindeer get stuck in a tree before Santa visits Rudolph's home and invites the young deer to guide this sleigh. Rudolph leaves a note for his parents and takes off in the middle of the night with Santa to save Christmas.

In 1958, Golden Books published an illustrated storybook, adapted by Barbara Shook Hazen and illustrated by Richard Scarry. The book is similar in story to the Max Fleischer cartoon short. Although it is one of the more memorable versions of the story in book form, it is apparently no longer in print. However, a revised Golden Books version of the storybook has since been issued.

DC Comics may best be known for its superhero comic books starring Superman, Batman, Wonder Woman and others. But they also made Rudolph a star. From 1950 to 1962, they published a new Rudolph the Red-Nosed Reindeer comic book every December. They released another issue in 1972.

Today the comics are quite collectible and can often be found on eBay.

Rudolph the Red-Nosed Reindeer is the longest-running Christmas special.

This animated TV special is a classic. Starring Burl Ives as Sam the Snowman narrator, this story of a misfit reindeer who saves Christmas is great for the whole family and features wonderful songs like "Holly Jolly Christmas."

Rudolph the Red-Nosed Reindeer
Amazon review: This classic 1964 television special featuring Rudolph and his misfit buddies set the standard for stop-motion animation for an entire generation before Tim Burton darkly reinvented it in the early 1990s. Burl Ives narrates as Sam the Snowman, telling and singing the story of a rejected reindeer who overcomes prejudice and saves Christmas one particularly blustery year. Along the way, he meets an abundance of unforgettable characters: his dentally obsessed elf pal Hermey; the affable miner Yukon Cornelius and his motley crew of puppies; the scary/adorable Abominable Snow Monster; a legion of abandoned, but still chatty, toys; and a rather grouchy Santa. In addition to the title song that inspired it, this 53-minute tape is crammed with catchy tunes such as "Silver and Gold" and "Holly Jolly Christmas." Those who grew up looking forward to watching Rudolph every Christmas season will undoubtedly be able to recite the quotable quotes ("I'm cuuuute. She said I'm cuuuute." "Herbie doesn't like to make toys.") as well as any Casablanca cult audience. --Kimberly Heinrichs
Buy Now

The trailer from the 1964 Rankin/Bass TV special.

According to IMDB, Sam the Snowman, who was voiced by Burl Ives in the animated TV special, was deliberately designed to resemble screenwriter Romeo Muller.

Muller wrote the teleplay for Rudolph the Red-Nosed Reindeer, as well as other holiday classics such as The Little Drummer Boy, Frosty the Snowman, and Santa Claus Is Comin' to Town. 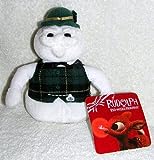 Rudolph Was a Woman

Rudolph was voiced by a woman, Billie Mae Richards. In the credits, she was listed as Billie Richards to disguise the fact she was female.

Hermey Doesn't Have Pointed Ears - Hermey was the misfit elf

Hermey the Elf, the misfit who wanted to be a dentist rather than work in Santa' s workshop, is the only elf without pointed ears. He's also the only male elf in Rudolph the Red-Nosed Reindeer with hair on top of his head. 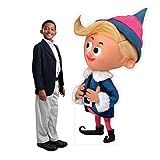 There is a well-known line in the song Rudolph the Red-Nosed Reindeer that starts, "All of the other reindeer..." This line was used in the book Olive the Other Reindeer by Vivian Walsh. In the book, a dog named Olive mishears the phrase as "Olive the other reindeer," and then sets out on a quest to become Santa's next flying reindeer. The book was later made into an animated special starring Drew Barrymore as the voice of Olive.

Olive the Other Reindeer
Description: In this delightfully funny animated adventure, "Olive, the Other Reindeer" is erally a kind-hearted dog who sets out to save Christmas when she hears that Blitzen is injured and Santa can't find a replacement! With the help of a smooth-talking penguin named Martini, Olive heads for the North Pole to join the flying reindeer team - but along the way, they must defeat an evil mailman who wants to end Christmas so he can carry less mail! With an all-star voice cast featuring Drew Barrymore, Ed Asner, Dan Castellaneta and Peter MacNicol, "Olive, the Other Reindeer" is sure to become a holiday tradition for young and old!
Buy Now

Rudolph and Bumble the Abominable Snowman
You know Dasher and Dancer and Prancer and Vixen. And undoubtedly you've heard of Rudolph. But how many other characters can you name from the 1964 TV specia...

Fun New Ways to Create a Merry Christmas Letter
The digital age has changed the way we do many things, but one thing that hasn't changed a lot for many people is the way they do their Christmas letters. Ma...

Bumble Snowman Decorations and Toys
Looking for Bumble snowman decorations or gifts? If you're a fan of the big, hairy white abominable snow monster from the animated TV special Rudolph the Red...

Hallmark Elf Microphone is a Fun Christmas Gift
Who wants to sing like an elf? Now you can with the Merry-Okee elf microphone from Hallmark. This fun little toy microphone plays music for six popular holid...

Wearable Blanket for Kids
Since the Snuggie wearable blanket hit the market in 2008, blankets with sleeves have become very popular. They're a great way to stay warm on a chilly day w...

Barbie Christmas Movies
Do you have a little Barbie lover in your life? Then she'll love getting one of these Barbie Christmas movies under the tree or in a stocking this year. Bar...

Read more about the holidays.

Did You Learn Some New Rudolph the Red-Nosed Reindeer Trivia?