We all know that Santa gets his usual attention during the Christmas holiday season, but even so, he's considered a pretty cool dude all year round; although he isn't in our minds as much as during that period of time when the fall weather starts coming in and we begin to think of the holiday season about to come upon us.

That means many of us start thinking of ways to express ourselves for Christmas, with images of Santa being a big part of that experience.

With that in mind, I always look at clip art of Santa as one of the sources of interesting Santa pictures that I may want to share with others on my blog, Facebook, or other digital outlets. There is also the inclusion of Santa clip art images in e-mails sent, as well as homemade Christmas cards printed out after designing them on the computer. A good healthy dose of Santa is included in this holiday cards.

In this group of Santa clip art images I'm collected those that include an usual action or look that Santa has been imagined as having or doing. That's always a lot of fun, and there are some pretty cool ones to enjoy.

Let's look at a few of them.

Clip Art of Santa Posing in Photo Op with Reindeer

To me you would just about have to be dead not to chuckle at this funny picture of Santa and presumably one of the reindeer that pull his sleigh posing for what appears to be a photo op moment.

It's hilarious. I like how even their heads point towards one another just like most of us instinctively do when posing for impromptu photos. Great fun.

Last but not least is the friendly smile and look on the reindeer's face as if he's not used to this type of publicity, while Santa seems to be an old hat at it. 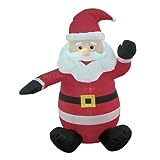 What a great image of Santa going through some martial arts exercise. I don't really know if this is related to kung fu or not, but it sure sounds cool saying this is Kung Fu Santa.

That look on his face is great, as if he's delighted to have your drop in and watch him go through his work out.

I really like the red work out outfit, and the bare feet are a hoot. Also funny is his wearing of his Christmas Eve work hat during his routine.

Santa Trying to Get Fat Sack Down Chimney

I think all of us had an image similar to this of Santa when we started to be old enough to understand something unusual had to take place in order for this whole Santa thing to take place in one night, and his usual means of entering the home through a chimney.

This image is funny because we're not used to Santa showing a more human side of himself by being frustrated with his inability to get the sack down the chimney.

All those lines around his body and the sack point to the fact that he is very animated in his effort to push that big bag down the narrow chimney.

His angry face shows he's not having much success in spite of his best efforts. 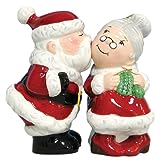 I don't know if it's the mistletoe or something else, but this in a wonderful depiction of what appears to be a blushing Mrs. Claus as old Santa appears to be saying goodbye before he sets out on his annual Christmas Eve delivery run.

It's a great image of them in costumes that almost match, as it their tender holding of hands. This would be a terrific clip art of Santa and Mrs. Claus to share with most people you know. Only a Scrooge wouldn't enjoy this work.

Vintage Santa Clip Art of Him Looking in Window

We don't know if this is Santa saying goodbye when waving his hand or saying hello. But it's a terrific vintage-style clip art of Saint Nick, with a fantastic looking beard and twinkling eyes.

One thing not easily seen and displayed is that unique gold belt worn by this Santa. As most of us know, in modern times that belt would have been colored black. It doesn't really matter, as it still looks great. I'm a person that likes to pay attention to detail, so things like that are fascinating to me.

What better way to close up this look at Santa clip art than a work that probably is one of him saying goodbye to whoever it is on the other side of the window.

That was a nice bunch of Santa clip art pieces. I can think of people that would appreciate them, and places I could insert them that would be delightful to the viewers.

More than that though, I hope some of you enjoy them to the point of taking and using them yourselves among your family or friends who would appreciate receiving or looking at an interesting piece of clip art of Santa during the Christmas holiday season.