Whether to select a "sexy" costume or a mainstream costume is one of the fun decisions you'll make leading up to Halloween. It's great time of the year. The selection of your costume will depend on a number of factors and there is a myriad of great new costumes available every year. There is certainly going to be one just perfect for you.

The photo you are seeing here is one of my personal favorites. It has all the attributes required to qualify as a sexy look. Low cut top with some shoulder showing, black knee high boots with stockings revealed. The long flowing hair! You get the picture (pun intended). While this photo is based on a popular actress, I think women of all ages and sizes can adapt this costume to look great.

To get many more ideas and tips on choosing your perfect costume this year read on...

There are a few new costumes around this season. Below are some of the examples I like personally. They are mostly variations on a theme, but still worth a look!

Secret Wishes Christmas Collection Santa's Helper Costume
For those who like to mix their holidays together! The santa hat which is part of this outfit has horns. Reindeer horns, that is!
Buy Now

Dreamgirl Women's Racecar Driver Costume
Like your costumes fast and racy? Then look no further than this great model. You even get the flag. Ready, set and you're off
Buy Now

Halloween we all love it. I really enjoy choosing costumes and with so many fabulous options available again this year, making a final decision can sure get confusing.

Now as a women myself, I'm picking SEXY. I fairly sure my husband agrees with me! I have had a good look at some of the new costumes on offer and have broken them down into Movie Themes or Mainstream Costume Ideas.

Here is a list of some of my favorite movie themed sexy halloween fancy dress costumes.

Here are MY favorites for mainstream or the usual suspects:

Wonder Women is a fictional comic book character who originally appeared in the early 1940s. She was supposed to be a feminist type of character but in more recently times has taken on a much more sexy persona - at least in terms of the way her costume is portrayed. Wonder Women's real name was Diana and she is an amazon warrior princess, based on Greek Mythology.

If you are looking for a sexy costume but with a bit of girl power thrown in, then a Wonder Women Halloween Costume is a great choice. 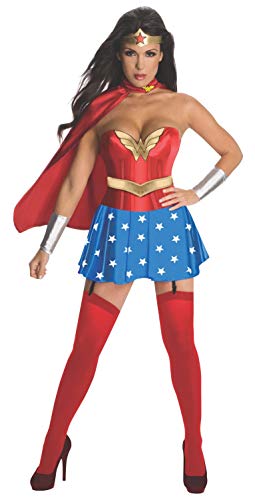 DC Comics Secret Wishes Wonder Woman Corset Costume
What's not to love about this costume. The cape, the headdress, the gauntlets for throwing down and the red, white and blue! DC heroine at her finest!
Buy Now

Batman: The Dark Knight and it's sequels and prequels have been popular movies recently, but why let the guys have all the fun? The Batman saga allows for some strong and sexy women to get in on the action. Not just to help Batman either but sometimes to be a thorn in his side. Here we have a couple of great costumes that well and truly fit into the sexy halloween fancy dress category.

Secret Wishes Batman: The Dark Knight Trilogy Adult Catwoman Costume
Catwoman. Not much to say about this one except wow! All the best super-heroines wear catsuits. Now you can too.
Buy Now 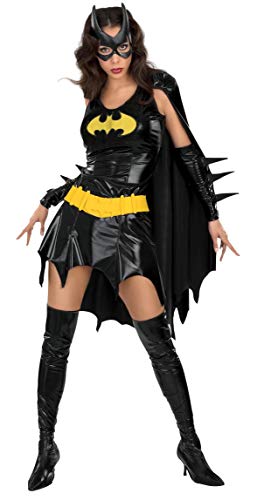 Secret Wishes Women's DC Comics Deluxe Batgirl Costume, As Shown, Medium
Yellow and Black is a great color combination. Looks wonderful. The mask really sets this one off don't you think? It's the official license so you know it's close to the real thing.
Buy Now

Secret Wishes Batman Sexy Robin Costume, Green, M (6/8)
I think the female version of Robin is way better. This on comes in a few sizes and looks good on everyone as it's not as revealing as some other choices.
Buy Now

or Maybe You're More a Queen of Hearts.

Was the classic story of Alice's Adventures in Wonderland one of your faves when you were a child? It was definitely one of mine! What fun she had as well as a good deal of danger as makes her way through Wonderland. Did it really happen or was it just a dream? Whatever the answer, you may want become Alice this halloween and or you may prefer to be a bit more evil as become the Queen of Hearts.

Alice in Wonderland is a perennial favorite for women's costumes. If you are looking for a sexier slant than the little girl look, this year there have been a few new releases mostly in the light blue color. See pictured right. This is the innocent, cutesy look but with a shorter skirt or a bit low cut. Some of these sport thigh high stay up stockings with the high Mary Janes shoes. You know, the ones with the strap across the instep. This is the quintessential Alice in Wonderland look. You can get the costumes in the darker blue color if that suits you better. Have a look here.

Feeling a bit more evil than cute then go for the Queen of Hearts! She spent most of her time screaming "off with their heads" and presumably because hearts on a deck of playing cards are red, her costumes are traditionally red as well. A great contract if you ask me. This costume can also work as a couple as the King & the Knave of Hearts could easily be your partner. Most of these costumes are long to the ground medieval style dresses but you can definitely find the shorter, sexier versions if you have your heart set on going sexy. Remember they say that power is the sexiest thing of all and the Queen of Hearts had loads of that.

I really loved the Iron Man Movies - I mean I've always been a Robert Downey Jr fan and wow is he sexy in those films! I know that I am not alone in thinking this so it will come as no surprise that the Iron Man costumes will be HUGE this Halloween as they have been for the last few years.

One of the costume ideas from the second Iron Man movie is dressing as an Ironette. They appear to be as popular as the movie itself. It you want to get one these for your Halloween party - I'd get cracking as they are still flying off the shelves!! The one shown here is the 'sassy' version. So popular they have been in and out of stock for a couple of years. I hope you are lucky if you want this costume.

The Scarlett Johansson Black Widow has definitely got pulses racing. After all that fabulous deep blue is a great change from the usual black leather most of these type of characters have. And Scarlett fills it out so well. But where does the character come from?

Black Widow is the creation of the wonderful Stan Lee as part of the Marvel stable. Her real name is Natasha Romanova and she first appeared in Tales of Suspense comic in 1964! She originally started as a non costumed Soviet spy in an iron Man comic book but has been associated with several other groups including The Avengers since. Black Widow played by Scarlett Johansson appeared in the popular movie "The Avengers', so we will continue to see more of this costume on our big screens.

Jonah Hex Secret Wishes Lilah Costume
This is the original color this costume came out in. I do prefer the black myself but it's certainly a personal choice. As with the white version shown below, the costume doesn't include the boots or the thigh high stay up stockings. You will need to add then as well as a wig to finish off the look.
Buy Now 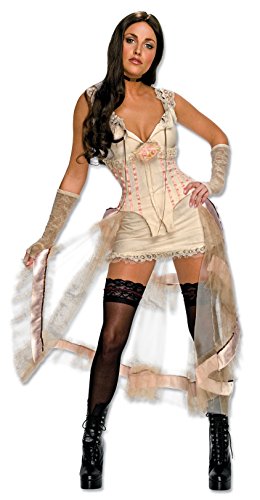 Jonah Hex Secret Wishes Sexy Lilah Costume
This is the white version of the Jonah Hex Lilah Costume and is an official costume. It comes with the glovelets and a chocker but you will need to supply your own stockings and shoes to finish of this outfit. Of course, if you have short hair adding a wig may also make to costume look more authentic. If you look below you can see one of the wigs that is available to add to you costume.
Buy Now 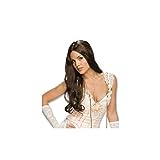 Adults One Size Lilah Wig
This is the wig only. It comes in one size fits all and can be hand washed for easy care. You will really show the costume off to it's fullest and be well in character when you add this wig to your ensemble.
Buy Now

Star Trek- who hasn't heard of it. It's been around since the '60's. From the very beginning the women's costumes were always much more skimpy than the mens. With the recent prequel, the tradition continues! These costumes aren't too revealing but you won't have to worry about our friends not knowing who you are!

The world as gone mad for zombies lately. Even Marilyn Monroe, as famous as she is, hasn't escaped the fad. Now most of the costumes recommended here are for a sexy theme, but this costume is just fun!

This costume comes complete with blood splatters on it for that extra authenticity! You might need to add a wig but really apart from a zombie makeup job this costume is good to go.

Cleopatra, Queen of the Nile Costumes... - ...New & Traditional Ideas On A Perennial Theme

A Sexy Cleopatra costume is a perennial favorite and this year won't be an exception. What women hasn't dreamed of being the "Queen of the Nile" at some time in her life.  Below are a couple new costume designs for this year. Now you don't need to just go with white and gold colors - there are now reds, blues and teals. Get creative!

Of course, you can't go wrong with a traditional version of an Egyptian Queen Halloween Costume. Here are some of the best and favorites. 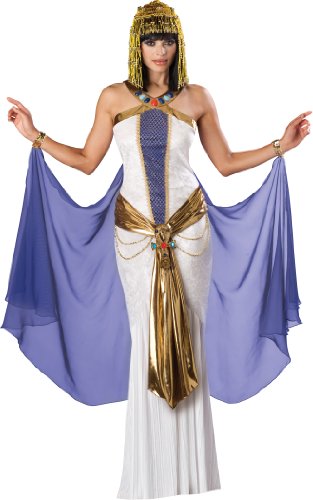 InCharacter Costumes, LLC Jewel Of The Nile Full Length Panne Gown
Love this shade of this one. Purple /Mauve is the royal color is very fitting. Is a complete costume and has a fabulous beaded headpiece. My fave at the moment!
Buy Now

Costume Culture Women's Cleopatra Wig with Headband, Black, One Size
A real looking and feeling wig to set off your costume. The real Egyptians mostly wore wigs it will give your costume an authentic look! For a perfect looking fit consider adding a wig cape to your order.
Buy Now

Sexy Pin Up Girl Costumes
The premise of the pin up girl has been around for some time. Now part of our pop culture, the pin up girl poster was meant to be pinned to the wall. Coming ...

Best Horror Movie List
When Halloween starts to come around, creepy, spooky and down right scary horror movies are always enjoyed. I don't know about you but I really love a good ho...

Share your ideas and tips here. Do you like to go sexy or choose a more mainstream halloween fancy dress costume?