Halloween is just a bit of modern fun, imported from USA, and that's how I see it when I write my ghostly pages with horror photos & poems

Hearts and Skulls Are Heavy With Symbolism

Who would ever have believed that so-called sophisticated people would be wearing skulls and hearts, either together or separately, emblazoned on their T-shirts, back-packs, leggings, and water-bottles,or adorning their backs, arms, chests and nether regions?

Well, thinking about it, maybe it's not for the sophisticated, more for the fun-loving rebels, and downbeat posers. Would I, personally, wear them? I'm not sure--I am, after all, the wrong side of 70, even if somewhat unconventional.

But I'll Tell You a Little Story:

I was shopping with my daughter recently, and spotted a black T-shirt with a big skull design mapped out in silver studs.

I mentioned to her that I had seen a top I quite liked, and my daughter said she had also seen one that she thought would look good on me. Well, blow me down if she hadn't chosen the same one that I chose! Is that telepathy or some other supernatural force?

I hovered over whether to give in to my impulse and buy it, urged on by her, but in the end, discretion won......after all, being a retired professional person, a lawyer, I do have an image to keep up for my fans, although many of them have dropped by the wayside these days, or perhaps I should say "passed over", if you get my meaning.

Below are some T-Shirts like the one I have been describing:

Skeletons for Halloween--Designed by Me on Zazzle

Skulls and a Broken Heart

How About a Tie with Burning Skulls?

Skull products have their own following - enjoyed by rebels and Goths who think the whole Halloween idea is silly, but they'd still like to send a cool Halloween Invitation or gift

Let's See How Many of You Are Superstitious--ake This Poll

A Burning Skull Spitting Out Fire and Brimstone 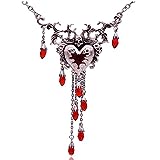 Halloween Fashion Blood Heart Rose Skull Collar Necklace Punk Gothic Jewelry Women Necklace (Necklace2)
B07596P3DY :This necklace caught my eye (better than stabbing me in the eye) and would make anyone an eye-catching gift to wear for Halloween and those with gothic leanings could wear it at any other time too.
Buy Now

You Can Leave a Comment or Question Here--Just Say Hallo, or Make Some Sign That You Have Visited - I Love to Hear From People