Someone's In the Wolf

I tend to pick some really strange Halloween costumes. Sometimes the more obscure the better! Last year I recreated a 'wolf in sheep's clothing' take from Queens of the Stone Age's Someone's In the Wolf music video. Here's how you can create it as well.

So this is where I got the inspiration for the costume. Or, you could say, ripped off the idea. Someone's In the Wolf is a song off the fourth QOTSA album Lullabies To Paralyze and the video is typical of the band's style.

It took a little work, but I eventually tracked down the same mask the band used in their music video. I believe at some point the band sold them on their website, so you much be lucky enough and already own one.

The original style mask is made of relatively fragile plastic, and intended for children, so be careful with it.

Unfortunately, the mask is no longer made.

The other alternative, if you're not able to find the mask or aren't going for the authentic look from the music video, is to find any suitable sheep/lamb mask from any Halloween costume store and go for it!

How to make the tail and paws

Where I diverted from the video is in the adding of a tail and paws to my costume, to give others a hint as to why the heck I'm wearing a lamb mask and street clothes.

I picked up three pieces of long fake fur from a craft store (JoAnn's or Michael's would have it) and a bottle of craft glue.

To make the tail I left the piece intact, folding it over into a tube-like shape, then glued it to itself to form a basic tail. I later pinned it to the inside of the back of my pants so it fell down to look like a tail was hidden under my jacket.

The paws were really cuffs. I cut the fur into strips that would wrap my wrists then safety pinned them tightly around my wrists so the fur flowed out from my jacket sleeves. Voila, imitation paws!

The completed wolf in sheep's clothing

To finish the look, I wore black pants, boots, a leather jacket, and a black shirt. In the video, the wolves wear normal street clothes along with their masks, so you can pretty much go with your own style.

As I said, the fake fur tail and paws were additives of my own doing and completely optional. Another idea would be to take along a (fake) sharp knife like the ones in the video, if you're a QOTSA fan. Any and all variations would be completely up to you. The more imaginative the better!

All-in-all, one of the most easy yet completely inventive Hallowe'en costumes you'll ever have. Enjoy! 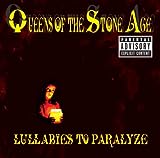 Lullabies To Paralyze
Including Someone's In the Wolf, the 2005 album by Queens of the Stone Age is full of all kinds of dark and dangerous hooks and lyrics to keep you awake all night.
Buy Now