Invitations: Super Mario Themed Birthday Party - Make your own 1up and Mushroom Invitations

These were so easy to make and my son loved them. All the kids that got one were excited to come. I used blank white 5x7 cards and envelope for the base, and used my scrapbooking paper and tools to make the invitiations. Here is the template that I used for the mushroom party invitations:

Give each guest a mustache to wear! 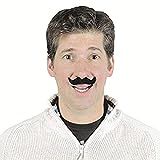 I gave each party guest a mustache and a Mario hat to wear as they came into the party. The kids loved the mustaches! These are self adhesive so they can wear them immediately. The kids wore them throughout the party. You can also put a strip of mustaches in each goodie bag to send home as a party favor. What fun!

Party Favor: Mario Cap - Make a Mario Cap for every kid to wear during the party and then take home

These hats were simple to make and didn't cost much at all. Many of the kids wore them the entire party. How to in the next module...

I bought white painter's caps and used red dye to dye them. Then I cut white circles from felt and red "M"s from felt. I used hot glue to attach the M to the circle and the circle to the hat. Make sure that you dye your hats ahead of time so they have time to dry before you glue on the M circles. Instant Mario! (Well, almost instant anyway.) I also got furry mustaches to give each boy. I had the hat and the mustaches on the table next to the Power Star Craft activity at each place. They kids came in, put on their hat & mustaches and got started on their crafts.

Everything you need to make Mario Caps

These Mario caps make a great party favor and are easy to make. Start with the painters caps.... Add some red dye and let them dry. (Plan ahead--they will need to dry for about 24 hours. Then cut white circles and red M's out of felt and hot glue them onto the caps. Now you have simple Mario caps to wear during the party and send home as a favor!

I used one box of yellow cake mix. I made two 9-inch rounds and 3 cupcakes with the batter. After I removed the cake from the pan, I wrapped the pieces and put them in the freezer for a bit to make them easier to ice and to cut to shape. One round was the main portion of the head. I cup a bit off the bottom of one of the cupcakes to use for the nose. I cut the other cupcakes in half. One half for each ear and one half became the chin. I also used a canister of white icing and a canister of chocolate icing. I mixed about 1/4 of the chocolate into the entire white icing and added about 4 or 5 drops of red food coloring to get the skin color. I use straight chocolate icing for the mustache and hair. I used the decorator icing in tubes for the red, blue, black and white. I piped stars with the red icing for the hat. This took 3 tubes of decorator icing. Then I used the round hole tip for the outlining and to make the white circle and eyes. You can find step-by-step directions complete with pictures here:

How to Make a Mario Birthday Cake

These make great decorations or party favors... - You could add one to the top of each ice cream serving and the guests could take them home! 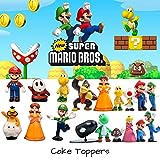 Here are 13 different Mario characters to use as party favors or decorations. You could use them as prizes for party games, or you could choose one character to send home with each of your guests. You can also put them on top of individual cupcakes or on a sheet cake for a simple Mario themed birthday cake!

Here's a tip to make the cake and ice cream time easier. Use a muffin pan and muffin cups, and scoop your ice cream ahead of time. Then put the whole thing back into the freezer and pull it out when it's time for cake and ice cream. The ice cream will already be scooped into individual servings. I put a Mario character on a toothpick into each ice cream scoop. You can print out the characters (like Mario, Luigi, Princess Pea, Power Star, Toad, Mushrooms and more). You can also use these tags on your party favors, goodie bags and whatever else you need.

Craft: Make a Power Star - This is a great activity as the kids are coming in

Do this early in the party so the paint has time to dry. See the instructions below...

How to Make Power Stars during your Mario Party - A fun, do it yourself, party favor

With precut wooden star shapes, some yellow paint, a sharpie marker, and a piece of magnetic strip, I had the kids make a simple starman craft. They painted the star yellow, and then after it dried a bit, drew on the eyes with a sharpie marker. Then we put a piece of the magnetic strip on the back. This was a fun activity and became one of the party favors. I had coloring pages of Mario and Luigi and Bowser for anyone who finished their starman early.

These are the wooden stars I used to make the Starman craft. Simply paint them yellow, let them dry, then add black eyes with a sharpie marker. Glue a piece of a magnet strip to the back and you are done!

Painting our Power Stars - The kids loved this activity

Here they are happily painting their stars. I also had a coloring page for them to color as they finished. We did this at the very beginning of the Mario party so they could come in and have something to do while everyone else was arriving, and the paint would have time to dry so we could put the eyes on the stars and put them in the favor bags.

Game: "Boos" Bean Bag Toss - This is such a simple game to make

This is such a simple game to make. I used a posterboard and drew the Boos character. Then I cut out the mouth and stapled the poster board onto an empty cardboard box. I made bean bags from felt and dried beans. No sew! Just use hot glue to seal the edges of the bean bags. Almost instant, cheap, fun game!

Game: Pin the Mustache on Mario - Another easy game to make

Mario is such an easy figure to draw. He's just a big cartoon. I used a picture of Super Mario that I found on a coloring page on the Internet and drew him onto a piece of posterboard. Then I cut out mustaches from construction paper. My kids had fun coloring in the Mario figure. Get a bandana and a few tape balls and you're good to go!

Activity: Yoshi's Egg Hunt - Yoshi pops out of eggs in the Mario Game

Here's another simple game or activity: Have an egg hunt. In the Mario video games, Yoshi can be all kinds of colors, so I used plastic Easter eggs in "Yoshi" colors to do an egg hunt. I filled them with candy and hid them pretty well all over my backyard. I wanted to give the kids a challenge to look for the eggs! They could each find 12 eggs. Once they found their own, some of the boys helped the others find more (since I apparently I hid some of them a little too well!) This got the boys outside and running to burn off some of that party energy.

Game: Bob-omb pop - Use balloons and candy to make a fun Mario game!

I put a piece of candy inside a black balloon, then I blew up the balloons. Each boy had to pop his "bomb" and got to keep the candy inside. No hands were allowed. I filled enough balloons so they could take several turns. We had a countdown to start to see who could pop their bombs the fastest. Just use candy that will not be crushed easily. I put star bursts and Airheads into the balloons. You could also use brown balloons and call the game "Goomba Stomp" instead.

Game: New Super Mario Bros. for Wii - Play this at your party

You can play Super Mario Bros at the party. Up to four can play at once. This makes a great gift too!

My kids love the Super Mario Brothers! They also love to play Wii. This was one of the first games my son bought when we first got our Wii. And it has remained one of the most popular games for all of my kids. I played this game to find out more about Mario and Luigi and all the other characters, so I could plan my Super Mario Birthday Party for my son. We have several Wii games with Mario, but this one is the favorite in our family. As my oldest son says, "It's Classic Mario, Mom!" I highly recommend this game for your Mario Party and for everyday fun!

I found Mario Bingo boards with all of the Mario Brothers characters on them and printed them out onto cardstock. I used M&Ms as the bingo markers. The kids really enjoyed playing Mario bingo and yelled "Mario" instead of Bingo when they got a bingo. Here are the Bingo cards: Mario Bingo

Every party needs a pinata. I used a paper bag, streamers, and a printed Mario Picture (which I colored) to make my own fast, frugal pinata. It cost me about $3 to make. You can find specific instructions on making your own paper bag pinata here: How to Make A Quick, Homemade Pinata.

What is your favorite party theme?

Give: Mario Goody Bags - Everybody loves a little something Mario to take home!

I used yellow bags and printed out the Mario character tag/toppers to glue on the sided. The kids each got a Mario hat, mustache, and goody bag to take home. Put a variety of Mario stickers, pencils, candy, and small figures in each bag.

My son wore his Mario costume for the party. We have both the Mario and the Luigi costume for my middle boys. My oldest son has a Mario costume too (adult size). They were Mario Brothers for Halloween, and now they wear them for fun all the time. You can't go wrong with a Mario Costume (or Luigi or Princess Peach!)

Free Mario Printables - Print these out for your party

You can see how popular Mario and Luigi are in my house! Here are my 3 oldest boys.

Are you ready to have a Mario Party? - What do you think of our party ideas?