Every year, the top Christmas toys sell out well before the holidays, leaving desperate parents and grandparents scrambling, searching local stores and often overpaying for the must-have Christmas gift. Don't pay too much for the presents at the top of your kids' Christmas lists! Shop early, and avoid the inflated prices and frustrating searches when the top Christmas toys are sold out.

Can't decide whether to buy a green Yoda lightsaber toy or a purple Mace Windu lightsaber? You can get both and tons more all in one toy with the Star Wars Ultimate Lightsaber. The Ultimate Lightsaber comes with 18 interchangeable parts, so you can build your own lightsaber in any of over 1000 possible configurations. Change the hilt sleeves, end caps, colors and sounds over and over to recreate your favorite Jedi or Sith lightsaber or build your own original design.

The Ultimate Lightsaber comes with three each of colored filters and crystals - one each in blue, green, and red - that fit in the handle. Insert a single crystal and filter or a combination to change the blade color and to vary the sounds you'll hear when you turn on the light saber and when you hit something with the blade.

The Clone Wars Ultimate Light Saber uses 3 AA batteries and is intended for ages 6 and up.

Since the debut of the Tickle Me Elmo doll in 1996, Fisher-Price Elmo dolls have consistently been one of the top Christmas toys to sell out early. This year should be no exception, with the introduction of the new Elmo Live! doll.

The new Elmo is the most advanced Tickle Me Elmo yet. Even better than TMX Elmo, Elmo Live moves his mouth realistically as he speaks, telling stories, sharing jokes, playing games, and singing songs. He stands up, sits down, crosses his legs, and moves his arms and head. He even interacts with your child, asking for a hug or a lift and saying thanks when he gets one.

The Fisher-Price Elmo doll is still in stock at or below list price, but he is starting to sell out at some retailers already, even with purchase limits in place at many stores. Don't wait until it's too late! If you plan to buy Elmo Live!, do it now before he disappears from store shelves and online retailers completely.

Dance Dance Revolution has been the most popular dance video game so far, but Hasbro's new U-Dance game is the most realistic dance experience available in a video game. Unlike DDR, which uses a dance mat to sense your steps, U-Dance uses motion-sensing technology in the form of sensors that you wear on top of your feet. The game records all your dance moves, from steps and jumps to slides and crossovers.

U-Dance by Hasbro is a plug-and-play game system, which means that all you need to play it is a TV with AV jacks. The game plugs right into your TV, without the need for a game console like the Wii or Playstation.

The U-Dance has three game modes, including two dance/workout/practice minigames, and the main Dance Floor game. In Dance Floor mode, you dance along to 12 popular songs, from "ABC" by the Jackson 5 to "Run It!" by Chris Brown. Chris Brown himself calls U-Dance "the best dance game out there."

The VTech Kidizoom Digital Camera is a multimedia camera designed for preschool kids age 3 to 5. The Kidizoom has a rugged exterior to withstand rough handling by little kids. The VTech camera takes digital photos and movies, with 16MB of internal memory for approximately 200 .3 megapixel photos or 5 minutes of video. An SD card slot allows for expanded memory to hold even more pictures or video.

The VTech Kidizoom comes in a choice of three colors and includes the following features and accessories.

The Kidizoom uses two-eye viewing windows and a 1.8-inch color screen for easy viewing by little eyes. Along the sides are two large rubber grips for two-handed holding. Buttons are large and simple for easy control of modes and features, and a joystick makes menu navigation even easier.

The EyeClops Bionic Eye toy by Jakks is a hand-held microscope shaped like a giant eyeball. The EyeClops comes with a video cable that connects to your television to show magnified images of everyday objects on your TV screen.

Kids age 6 and up can hold the Bionic Eye in one hand and point it at anything they can think of to get an up-close look at 100x, 200x, or 400x magnification. The microscope operates on five AA batteries and has small LED lights near the lens to illuminate the objects being magnified.

The I.R.I.S. lens has a focusing gauge for easy focusing for even the youngest users. A viewing dish is included for holding liquids and small items to be magnified.

Showing the objects magnified by the EyeClops in full color on a television screen makes using the Bionic Eye exciting and simple for your little scientists. The EyeClops Bionic Eye makes a great Christmas gift for curious kids!

Jakks EyeClops Bionic Eye Microscope - With multizoom feature, in stock and more than 50% off list price

When do you do your Christmas shopping?

The coordinating dolls are basically High School Musical Barbie Dolls, about 12 inches tall and the perfect fit for the High School Musical Doll House. All the main characters have dolls - Troy, Gabriella, Sharpay, Ryan Evans, Chad, Kelsi, Taylor, and Zeke - and there are even High School Musical doll accessories like Sharpay's pink Mustang and Gabriella's locker to complete the scenes.

With accessories like a locker and Sharpay's dressing room vanity, the High School Musical doll house is packed with features. The sides close, leaving the front of the doll house a perfect replica of the school, complete with the East High School sign over the front door. There are even sounds from the movie that play in the doll house, including the song "We're All in this Together." 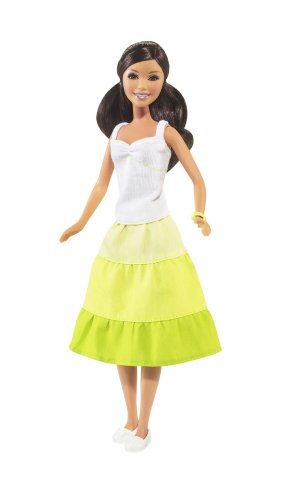 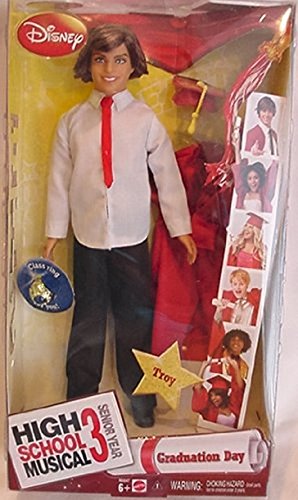 Kota My Triceratops is an interactive dinosaur toy, so he responds to your child's touch and voice. When you touch Kota, he moves his horns or head, purrs, or sniffs your hand. When you roar at him, he roars back.

Best of all, when a child (up to 60 pounds) sits on Kota the Triceratop's back, he makes stomping noises as he bounces up and down. The adventure is complete when Kota plays one of four songs as you ride. When kids are finished riding, they can feed Kota the Triceratops one of his leaves, and he'll move his mouth realistically as he makes chewing sounds.

Find out more about Kota the Triceratops

Kota the Triceratops Ride-On Dinosaur - Save $100 and get free shipping from Amazon.com

The Crayola Glow Station is a glow-in-the-dark drawing board that lets you write and draw with light. Set up the Glow Station in a dark room, turn on the battery-powered Light Wand, and apply it to the poster-sized glow board to create with light.

Your art lights up on the Glow Station, then slowly fades away, leaving you with a blank canvas to start again. Use the Crayola Glow Station for drawing, writing, or playing a game of tic-tac-toe. Included accessories include a Crystal attachment for the Light Wand for making star shapes, stencils, and texture sheets for adding things like dots and stripes.

The Glow Station canvas can be used hung on a wall or laying flat on a table. There are places to store all the accessories when the canvas is hung up, and the Glow Station rolls up for storage or travel. The Light Wand uses 3 AAA batteries.

Find out more about the Crayola Glow Station

Clipo Blocks and the Clipo Creativity Table are a set of colorful interlocking blocks and an activity table for toddlers and babies.

Clippo toys are designed for kids 18 months and older, and the blocks have chunky shapes and sizes that are perfect for little hands. Clipo blocks are covered in pegs that easily connect simply by pressing the blocks together.

The Clipo Activity Table is toddler sized and brightly colored. Features include several pegged surfaces for building with the Clipo blocks as well as a motorized gear that turns on the table or can be removed for building moving creations. When on the table, the battery-powered gear moves two adjacent gears to spin the block creations around.

The Clipo table also includes a shape sorter, two block storage compartments, and two drop slots for putting blocks through. With this variety of ways to play with the blocks on the table, the Clipo toys will grow with your child, from practicing hand-eye coordination and fine motor skills as a baby to building elaborate creations as an older toddler.

Learn more about the Clipo Creativity Table from Playskool 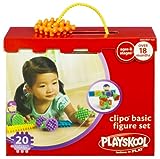 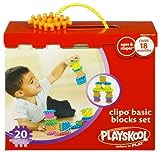 Helmet Heroes from Playskool are electronic toys for preschoolers to pretend they are a police officer or a race car driver. The toys include a helmet and either a race car steering wheel or a police motorcycle handlebar, both with lots of lights and sounds for role play fun. Both helmets feature realistic flip-up visors and working microphones.

The Helmet Heroes Police Officer comes with a helmet with flashing lights and police decals as well as a motorcycle-style handle bar. The handle bar has cool gauges and buttons to control flashing lights, police car sounds, and fun phrases like "Set up a road block!"

The Helmet Heroes Race Car Driver includes a racing helmet with a flashing light and a race car steering wheel. The steering wheel controls the helmet light, racing noises, and action phrases like "Come on in for a pit stop!"

Both Helmet Heroes toys use five AA batteries (included, three for the helmet and two for the handlebar/steering wheel) and are intended for children ages 3 and up.