Grab a blanket, and a good book and curl up in a cozy chair, grab one of these books and prepare yourself to be too afraid to go to the bathroom. These books will incite a fear that only you can control, but the question is ' Will you have what it take to put one of these scary books down once you get started?'

Many have tried and few far more have succeeded. There are not many people that have it in them to finish these books to the very end. The ones that do, end up with delirious thoughts and are usually admitted to the nearest institution.

Take a moment to digest..

Follow along and discover what has been told about the scariest, creepiest, and most horrifying tales to ever be bound in ink. How these scary stories ever came to be is but a question that will forever go unanswered. The top ten scariest books could only be conceived by the most tortured and twisted of minds. Here in lies the ten scariest books ever and the reviews about them given prior to admittance. Let us take a look at the first book in the list. Shall we?

Bram Stroker's Dracula is a truly bone chilling story that has withstood the test of time and has been marked in history as the greatest vampire books of all time and the greatest horror novel ever written. This book is an account, by many, of Count Dracula's final days. Riddled scenes of violence and some rather shockingly gruesome descriptions of events. If you are an impatient reader you may find that some sections of the book may move too slowly, but if you have it in you to keep reading you will soon be captivated by the sudden spurts of action and drama. This scary book features such elegant characters and descriptions that by the end you will feel that you may have already known them.

Richard Matheson, a master of scary and an author that is destined to disturb the feeble minds of men. Known as one of the scariest books ever, Hell House is most likely a book you should not read if you are alone. Fore a persons fortitude is only so strong. Hell House is the scariest haunted house novel ever written. The story evolves around a dying man eager to learn the facts about life after death. The only thing he and his paid colleagues learn is that in this house there is only death. Will you be able flip the pages of Hell House before death grips you?

The Haunting of Hill House

The Haunting of Hill House is a tale that is surely to unnerve you as it has done others since 1959. The author Shirley Jackson has created a psychological terror that has earned its place as one of the most significant haunted house stories of all times. If you are one for the supernatural then this is the book that you will love to have make your skin crawl and your blood chill. The story is about a young girl(Eleanor Vance) who's mother dies and she ends up being invited to stay in house with the intent of finding the supernatural. Little did she know, she is a supernatural magnet that draws in ghostly apparitions and ominous wails from creatures beyond. This scary book may keep you gripping the pages in suspense and fear because the obvious horrors of Hill House is always subtle.

Haunted by Richard Matheson is a terrifying book that no self-respecting fan of Haunted House stories should be without! The events in this book are stunningly graphic but still manage to not go over the top. A real spectacle in the genera of haunting. There are events in this book that can be simply described as down right disgusting. Unlike the scary stories above, Haunting is a fast paced ghost ride. Coincidentally this book is written about David Masters , a horror writer, and his daughter Amber. Davids enthusiasm for writing horror novels lures him to Baudley House, a sprawling mansion supposedly filled with ghosts and demons.

Rickman, a British author whose first US publication was Curfew. Curfew is packed to the rim with subtle horrors and well timed gore that is sure to make you jump from your seat. This scary book is about a town that has underwent a pact to rid the town of evil by religiously preforming certain tasks. On such task is to sound the church bell 100 times though out the night in order to keep evil at bay. However, new-age music tycoon , a couple of modern witches,old standing stones, and echoes of an evil past react to disturb things as they are. Curfew is filled with a growing claustrophobia and paranoia that will encase itself in your mind and will most certainly make you go insane with chills on every page.

Here is a collection of the scariest books ever... on film. Watch these movies and find out how the authors of these scary books would have visually portrait their stories. Watch Francis Ford Coppola's take on "Bram Stroker's Dracula!" A contemporary take on the scary novel 'Hell House' directed by John Hough. Shirley Jackson's psychologically terrifying ghost story 'The haunting' directed by Jan de Bont. And the only visual, novel, remake that was banned by the BBFC, Curfew by Rickman. 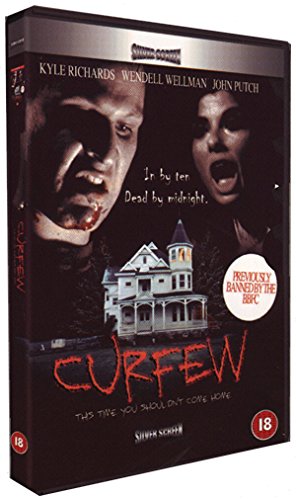 Allow me to Pick Your Brain - Ten Scariest Books

What type of Scary book do you prefer to pick your brain?

December is a harrowing tale of precognition, teleportation and much more. This scary book can and should be read a terrifyingly fast pace. In this book a group of psychic 1980s band members attempt to record their album in an ancient Abbey just to be stopped by mysterious forces. In years past the band reunites by un-explainable means and tries to figure out the happenings of their past and confront the horror that stopped their albums release. Rickman has a way with words that will bring you to love or hate each of the character of December as he brings them to life within these pages.

That's right, I Am Legend, the book not the Will Smith Movie. Although this book is the base for that movie. The author Richard Matheson found another way to pick the sanity from you brain with this scary book. I Am Legend is one of the most influential vampire novels of the 20th century that regularly appears on numerous "10 Best" lists of the horror genera. In this book a terrible plague begins to decimated the world. Those who were unfortunate enough to survive have been transformed into horrors that only the night will embrace. In a world of horrifying creatures. Robert Neville is the only man immune to the disease. It is because of this that he is now the monster and must be expunged. By reading this scary book you feel the terrors and tribulations that Robert Neville felt on his journey.

Author Paul Willson has somehow in his warped and twisted mind crafted a masterpiece of mystery and horror. Featuring, Repairman Jack, one of the most wildly know literary characters since James Bond. In this yarn, Jack, has to remove a family curse in order to save the life of a loved one, Vicky. This horrifying novel pits jack against Kusim and his army of Rakoshi. After reading this masterpiece the last thought that crosses your mind will be, "Tomb? What dose this have to do with a Tomb?" .

House of Leaves is yet again another literary masterpiece of the horror genera. Mark Z. Danielewski created a scary story about a family that moves into a house, trying to sort out its interpersonal demons. The family soon finds out that t the insides of things (the house) can often be darker, scarier, and more strange than they would originally appear from the outsides. If the plot itself dose not cripple the very ability for you to comprehend reality the vivid description and action will.

Yeah...uh...well I've got nothing on this one. But if you really think about it, anything that Hillary Clinton has

Below is a list of movies that are visual recreations centered around a scary book by one man, Richard Matheson. Matheson's books have spawned three different movie titles that bear significant resemblance to his famous scary novel 'I Am Legend'. The first movie to portray Matheson's book is titled none other than 'The Last Man On Earth'. This is significantly important because the title alone is the overwhelming theme of the entire horror novel.The starring cast of this movie was none other than the ever popular Vincent Price, Franca Bettoia and Emma Danieli.

Later a second movie emerged that was also based on Matheson's tale called 'I Am Omega' starring Mark Dacascos, Geoff Meed and Jennifer Lee Wiggins.

And lastly 'I Am Legend'. Where the extremely famous Will Smith plays the role of Robert Neville in Matheson's literary masterpiece of horror. Will Smith is accompanied by Alice Braga, Charlie Tahan and Salli Richardson as he battles the endless hordes of vampires and the emptiness of being alone.

The Last Man on Earth - In COLOR! Also Includes the Original Black-and-White Version which has been Beautifully Restored and Enhanced!
Buy Now

I Am Omega
Buy Now

Here it is ! - The moment you have been waiting for..

The Top Ten List of the Scariest Books ever!

Think they are in the wrong order? Prove it. Vote your scariest story up or down.