Well, maybe skip that last one. But any other time of year you feel inspired to be a turkey, here are some fun costumes and hats for the occasion. And there are even a couple of turkey costumes for the smaller birds, so your whole family can be part of the rafter (which is what a group of turkeys is called, if you didn't already know that little tidbit).

In addition to some cool gobbler costumes, hats and a turkey tie, I've included fun facts about this particular type of poultry and a turkey trivia quiz you can take to boost your knowledge of the big bird.

Check out that turkey costume up there! It almost looks REAL, doesn't it?

Okay, Pay Attention Because There's a Quiz at the End

The wild turkey is one of the largest birds in North America. An adult male can grow up to 4 feet long from beak to tail. Wild turkeys live in open fields and woods and nest on the ground. They prefer to eat insects, grasses, nuts, and berries.

A Turkey Costume for All Occasions

Note: You don't have to walk all bent over like the guy in the photo. He just threw his back out.

This costume includes a body section with attached wings and tailpiece, a character hood attached to the turkey body, and a pair of leg and shoe covers. It's available in one size, which fits most adults, and is made of 100% polyester. Hand wash the costume in cold water and drip dry. (Nope, the white shirt is not included.)

Concerned about being a wrinkled turkey?

No worries. According to the manufacturer, removing wrinkles from the costume is really easy. The first method is to remove the costume from the bag in advance of when you want to wear it (how far in advance that is, I don't know), unfold and fluff the costume, and just let it hang on a hanger. You can also leave it in your bathroom while you shower to allow the steam to remove wrinkles. The fastest way is to use a steamer.

The turkey was domesticated in Mexico and brought to Europe in the 16th century.

Ben Franklin thought the North American wild turkey should be the national bird (rather than the Bald Eagle).

A Costume for the Gobblers and the Hens

Yep, it's a unisex turkey

He sure does look like a happy big bird, doesn't he?

The "beard" that grows from the middle of a turkey's breast is a group of modified feathers that look like hair. Beards are most commonly found on adult male turkeys, called gobblers, but females, or hens, will sometimes grow them as well.

The costume comes complete with the jumpsuit, attached mitts, head, and feet. Made of soft polyester material, the costume set is packaged in a snap-sealed bag. It's machine-washable and flame-retardant (in case someone tries to cook you, I guess).

A reviewer gave this costume five stars and wrote, "I love the Turkey Costume - But most of all the kids loved it. I had my son wear the costume for our Thanksgiving Dinner. We were all taking pictures with our mascot. The material is really good and is not that heavy. The colors are perfect."

Despite their large size, wild turkeys are powerful fliers, reaching speeds of up to 55 mph over short distances.

Kind of a cross between a turkey and Big Foot

This costume includes the headpiece, jumpsuit, gloves, and shoe covers.

I don't know that I've ever seen such a hairy turkey. Have you?

Adult turkeys can have 3,500 feathers.

Check Out This Big Bird

A turkey costume for kids and teens ... and others who aren't too big and tall

Show off and have fun in this official Rasta Imposta costume made of 100% polyester.

The costume includes the body and legs and must be spot-cleaned instead of washed, so try not to drop any cranberry sauce on yourself.

Adult males are called toms or gobblers, and adults females are hens.

For The Little Turkey

This is a great Thanksgiving costume idea for school plays and other productions. Or for anytime the little one is feeling like a turkey.

To Top Things Off: A Turkey Hat

"Like many of you, each Thanksgiving I purchase two turkeys, one for the family meal and the other to wear on my head. It has been a constant source of frustration for me that my organic 'turkey hat' generally goes rancid after only a few hours of wear. The fit becomes too loose and the turkey tends to slide down over my face frequently. Not to mention the unpleasant smell as the meat decays. Sound familiar?

At long last, someone has produced a synthetic turkey headwear product that should alleviate some of the problems I've mentioned above. Can't wait to try mine out this Thanksgiving."

That's quite the endorsement, eh? 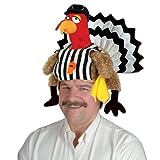 That Ref is a Turkey Hat

This turkey topper is perfect for game day, with its black and white referee shirt and a black hat. The turkey is holding a yellow penalty flag and is wearing a working orange whistle ... in case you get the urge to take it off and blow. His fantail of black and white matches his referee shirt.

In case you're into stats (or just want to measure your head to be sure this will fit), the inside of the hat measures approximately 8" high x 16" wide x 22" around.

If you're going to be a turkey (or wear a turkey costume or hat anyway), then you should know a thing or two about this fascinating (?) bird....

Turkey Fact:To attract female turkeys, toms strut about, gobbling loudly and holding their heads high. They stick out their chests, fan their large tails and drag their wings on the ground.

Turkey Fact: Turkeys have heart attacks. When the Air Force was conducting test runs and breaking the sound barrier, fields of turkeys would drop dead.

Turkey Fact: Astronauts Neil Armstrong and Edwin Aldrin ate turkey in foil packets for their first meal on the moon.

Turkey Fact: A turkey's age is a factor in taste. Old, large males are taste better than young toms (males), which tend to be stringy. The opposite is true for females: old hens are tougher birds.

Are You Now Inspired To Be The Big Bird? - Comments about these turkey costumes and hats?