Xmas is Actually An Ancient Abbreviation

Xmas may not be the word you thought it was.

Many people object to the word "Xmas" because they think it's taking "Christ out of Christmas." In fact, the very opposite may be true. Although Xmas is definitely an abbreviated form of Christmas, the origins of the word go back to the time when the word Christ was routinely abbreviated and symbolized by the Greek letter Chi. "Xmas" was never meant to be a secular replacement for the word Christmas.

In its original usage, it was, in fact, a direct reference to Christ. Here's how "Xmas" became part of our language.

No, Xmas Wasn't Dreamed Up By a Lazy Copywriter

It's all Greek to me

I've always assumed "Xmas" was probably the invention of a space-challenged advertising copywriter who needed to fit a long word in a short space. I figured Xmas was modern shorthand, not much different than using "tx" instead of "thanks" or "brb" instead of "be right back" in email or text messages.

So I was shocked to discover Xmas isn't shorthand or slang at all, and it was never intended to take the "Christ" out of Christmas, as some people now say. In fact, the very opposite is true. Xmas is actually an ancient abbreviation for Christ. It existed long before advertising copywriters, text messaging, or politically correct attempts to make everyone say "happy holidays."

The word Xmas has been used for hundreds of years. In fact, the world's very first Christmas stamp issued by Canada in 1898 had the word Xmas on it.

In early times, the word for Christ was often abbreviated as "Xp" or "Xt." According to the Christian Writer's Manual of Style by Robert Hudson, "Oddly enough, the abbreviation has a long and established history in English, dating back to Old English form used in the Anglo-Saxon Chronicle of the twelfth century. The X is actually the Greek letter Chi and has been used as a symbol for the name of Christ (Christos) since the first century."

In fact, Wikipedia says the "Oxford English Dictionary (OED) and the OED Supplement have cited usages of "X-" or "Xp-" for "Christ-" as early as 1485. The dictionary further cites usage of 'Xtianity' for "Christianity" from 1634. According to Merriam-Webster's Dictionary of English Usage, most of the evidence for these words comes from 'educated Englishmen who knew their Greek.'"

Of course, today the majority of people who use Xmas in place of Christmas don't realize X is the Greek letter used to symbolize Jesus Christ. They are, in fact, using it merely to shorten the word Christmas. But if you've been dismayed to see this word, worried about taking "Christ" out of Christmas, you can rest easy. Xmas keeps the Christ in Christmas.

Christmas in America: A History - Learn more about Christmas traditions and history

How much do you know about the history of everyone's favorite holiday? This book gives you insights into how Americans have celebrated Christmas over the years. 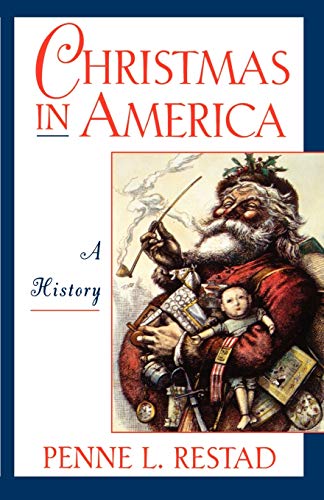 Christmas in America: A History
Description: The manger or Macy's? Americans might well wonder which is the real shrine of Christmas as they take part each year in a melange of churchgoing, shopping, and family gatherings, often wondering whether our culture has commercialized the season beyond repair. But, as Penne Restad demonstrates, Christmas has always been an an ambiguous combination of solemnity and frenzy. Christmas in America presents us with a fascinating reflection of our changing society by displaying how we have celebrated this holiday from colonial times to the present. While the early Puritans in New England primly denounced any festivities, city dwellers flooded the streets in raucous demonstrations, and Virginians hunted, danced, and feasted. Unwrapping the hidden messages in such time-honored traditions as the Christmas tree, gift-giving, and family dinners, Restad brilliantly reveals how Christmas has evolved into an unescapable presence in contemporary culture. Brimming with insight and colorful detail, Christmas in America shows what our celebrations tell us about our culture and ourselves. From Clement Clarke Moore's poem "Twas the Night Before Christmas" to the box-office smash Home Alone, Restad's marvelous book offers much to delight and consider.
Buy Now

Does the Origin of the Word Xmas Change the Way You Feel About It?

Many people don't like Xmas. If you're one of them, does knowing about the word's origins change your opinion?

Is Santa Real? How Do You Answer the Question?
He flies through the air with magic reindeer, slides down chimneys to deliver toys to children who have been good, and somehow knows if you've been naugh...

Eco Christmas Gifts
Many people are trying to live a greener life. If you've got some earth-conscious gift recipients on your shopping list this year, these eco-friendly Christm...

Christmas Presents Mom Will Love
There are two ways people usually shop for Mom during the holidays. The first is to select traditional Christmas gifts people always give their moms, such as...

Cool Christmas Cards
When you send your annual Christmas card to your friends and family, does it blend in with all the rest? Or does it stand out from the crowd? Here are some c...

The History of the Poinsettia Christmas Plant
Thousands of years ago, the Aztecs used a plant they called Cuitlaxochitl to make red dye and ease fever. Today that same plant is known around the world as ...

Christmas Stocking Holders
If you'll be hanging Christmas stockings out for Santa Claus to fill on Christmas Eve, you'll need a good hanger to make sure they stay in place unti...

Do You Use Xmas In Place of Christmas?