Since the first Africans were brought to North America in 1619 until the last achieved freedom in 1865, African-Americans sought to tell their stories. The majority, lawfully denied education, told their stories through the oral tradition within the African-American sub-culture. Others dictated their life story to abolitionist who used ex-slave’s experiences to highlight the cruelty and injustice of slave life. And then there were those like Harriet Jacobs and Fredrick Douglass who were able to write with their own pen for the world to recognize the horrendous plight of those under slavery.

Regardless of the means, the slave narrative flows from a long overlooked and often hidden away past. Often enduring severe torture, labor exploitation, sexual abuse, and many other horrors, the slave’s narrative is not Gone with the Wind or any other piece of romanticized literature. It is a raw, unfiltered, look at life and survival by those who lived it. Read below for 21 things you just may have not known about slave narratives.

1. There is often conflict between academics in whether to view narratives as historical or literary works.

2. Slave autobiographies, such as those by Fredrick Douglass and William Wells Brown were extremely popular in the 19th century amongst White Americans. For example, slavery advocates read them for proof of Black inferiority, abolitionists read in support of equality, and academics used to debate whether Blacks could learn and reason.

3. “The Narrative of the Life of Fredrick Douglass” 1845, sold 30,000 copies in the USA and Britain by 1860. Born free but kidnapped and sold back into slavery, Solomon Northrup’s narrative sold 27,000 in its first two years.

4. The slave narrative has been defined as the antithesis to the plantation novel.

5. At times, White 19th century writers published faux slave autobiographies under pen names. It was considered a literary feat if a writer could convincingly imagine himself in the life of a slave.

6. Research has shown that 90% of ex-slave speeches, letters and autobiographies were written by their true ex-slave authors.

7. Due to race and gender subjugation Black women were less likely to become literate post- slavery and wrote only 12% of slave autobiographies. Most of their accounts were dictated and transcribed by someone else.

8. Between 1936 and 1938, the last remaining African-American ex-slaves in 10 states were interviewed by the Works Progress Administration’s (WPA) Federal Writer’s Project.

9. The WPA narratives encompass 2,300 accounts of slavery and over 200 photographs from 1936-38. Many interviewees were well above 80 years in age and were enslaved towards the Civil War.

10. It is been argued that the predominantly White WPA interviewers were often untrained, unsympathetic, sometimes racist, and pushed for positive answers.

11. Some researchers have charged that the WPA interviewers edited out parts they found unimportant such as slave religion, cruel slave masters, lynchings, runaway slaves, punishment, and stories about serving in the Union Army.

12. Many ex-slaves, still living in the south not far from the descendents of their masters, feared White reprisal for telling their stories.

15. The Oklahoma and Texas WPA narratives, for example, include accounts of slaves held by the Choctaw and Cherokee.

16. It is controversial that the WPA narratives of 1936-38, were governed by America’s Folklore Division rather than its Office of Negro Affairs.

18. Although a typical occurrence that many African-American slave women refused to speak about, Harriet Jacobs was the first slave woman to write about the sexual abuse she suffered under her master and that he fathered many slave children.

21. The slave autobiography was not just a life’s account; it served as a means of achieving equality. Henry Louis Gates wrote, “...the presupposition went, a black person could become a human being by an act of self-creation through the mastery of language.” 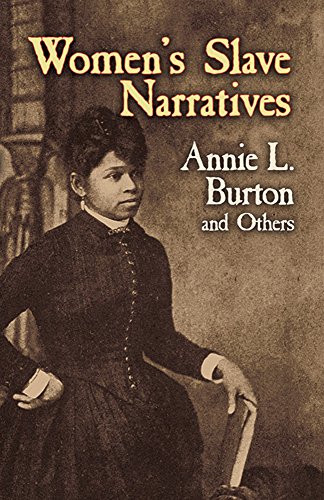 “The secrets of slavery are concealed like those of the Inquisition. My master was, to my knowledge, the father of 11 slaves. But did the mothers dare to tell who was the father of their children? Did the other slaves dare to allude to it, except in whispers among themselves? No indeed? They knew too well the terrible consequences.”
Harriet Jacobs, Incidents in the Life of a Slave Girl, 1861

"My master used to read prayers in public to the ship's crew every Sabbath day; and when I first saw him read, I was never so surprised in my life, as when I saw the book talk to my master, for I thought it did, as I observed him to look upon it, and move his lips. I wished it would do so with me. As soon as my master had done reading, I followed him to the place where he put the book, being mightily delighted with it, and when nobody saw me, I opened it, and put my ear down close upon it, in great hope that it would say something to me; but I was very sorry, and greatly disappointed, when I found that it would not speak. This thought immediately presented itself to me, that everybody and everything despised me because I was black."
Narrative of James Gronniosaw, 1770

"The fighting must have been too far away. Master Rogers kept all our family together, but my folks have told me about how the slaves was sold. One of my aunts was a mean, fighting woman. She was to be sold and when the bidding started she grabbed a hatchet, laid her hand on a log and chopped it off. Then she throwed the bleeding hand right in her master's face. Not long ago I hear she is still living in the country around Nowata, Oklahoma. Sometimes I would try to get mean, but always I got me a whipping for it. When I was a little girl, moving around from one family to another, I done housework, ironing, peeling potatoes and helping the main cook. I went barefoot most of my life, but the master would get his shoes from the Government at Fort Gibson. I wore cotton dresses, and the Mistress wore long dresses, with different colors for Sunday clothes, but us slaves didn't know much about Sunday in a religious way. The Master had a brother who used to preach to the Negroes on the sly. One time he was caught and the Master whipped him something awful. Years ago I married Joe Bean . Our children died as babies. Twenty year ago Joe Bean and I separated for good and all. The good Lord knows I'm glad slavery is over. Now I can stay peaceful in one place, that's all I aim to do." Nancy Rogers Bean, WPA Oklahoma Narrative, (recorded betw. 1936-1938)