A Beautiful and Complex Book: Review of Beyond Nationalism A Social and Political History of the Habsburg Officer Corps

We lived and breathed the monarchy and the war. Our schoolbooks taught us that Austria-Hungary had been a marvelously strong, happy, and peaceful place, in
which one could travel hundreds upon hundreds of miles without a passport, though
the Austrian half of Austria-Hungary had really been a foreign country to us Hun-
garians, and the Austrians not truly our friends. We were taught that our king had
been a good ruler, though back in 1849 he had hanged the bravest Hungarian
patriots, and though there could be no question of our having another king from the
same family. We were taught that Czechs, Slovaks, Serbs, Croats, Romanians,
Ruthenes, Poles, Italians, and German-Austrians had fought shoulder to shoulder
with us in the World War, though most of these nations had always been our
enemies, and though the Romanians as well as the Czechs had been quite particu-
larly cowardly and vile. We were taught that many Jews fought bravely in the war,
though Jewish people were considered the bane of the country. We were taught that
our soldiers had won great victories in the war until stabbed in the back, in 1918, by
the pacifists, Freemasons, socialists, and Czechs. We were further taught that the
Magyars were the best soldiers in the world, despite the fact that Hungary had not
won a single war since the fifteenth century. And, finally, we were told that Hungary
had been a great and sovereign kingdom within Austria-Hungary, and that it had
suffered a terrible injustice after 1918 when it was deprived of two-thirds of its
territory. Clearly, as youths it was our sacred duty and the goal of our life to redress
this injustice and to recover the lost provinces from our neighbors: Romania,
Yugoslavia, Czechoslovakia, and Austria.

Such is laid out by Istvan Deak the contradictions of the Austro-Hungarian empire. Despite these contradictions, the author clearly has an appreciation for Austria-Hungary, which verges on nostalgia, especially near the beginning where he touts the achievements of Austria-Hungary and writes off the subsequent states as more examples of what to avoid than what to emulate. If this illuminates his text, it represents an interesting departure of the normal attempt to consign Austria-Hungary to the ashbin of history, and is vital to attempting to understand his thesis : that the Austro-Hungarian officer corps represents a force animated and bonded by something other than nationalist tendencies, propelled and governed by concerns that were other than being nationalistically oriented, and played a crucial role in holding together the multi-national Hapsburg monarchy. It was more than just a German-dominated force which dominated over the unfortunate Slavs and Hungarians, but rather a force which represented, in a monarchical, conservative, and hierarchical society, an officer corps that was impressively tolerant and blind to ethnicity, imbued with values that predated those of 1789. He attempts to demonstrate this by examining the Hapsburg officer corps in depth, and the political mutations that it underwent throughout the existence of Austria-Hungary.

As far as the layout of the book goes, it first starts out with outlaying an introduction and some of his research methods and intents, followed by a general political history of Austria-Hungary, concentrated upon the relationship of the Austro-Hungarian officer corps to it : the focus is upon the initial development of permanent military institutions, the 1848 revolution, the creation of and the problems resulting from the Dual Compromise which created Austria-Hungary itself, and finally the changes in the army leading up to the Great War. This is intriguing and well done, but not upon his principal thesis subject, and by the time that one gets nearly 1/3 of the way through, one begins to wonder where exactly he'll start digging into his real material. However, in chapter 3, he plunges into the officer corp's structure itself, detailing its military education at the Austrian (and later Austro-Hungarian) military academies, with the style of education, student life and behavior, social attitudes, paternal career composition, and the resulting man which emerged after long years behind the prison-like walls. The students of these academies are then followed as they join their regiments and the linguistic, religious, nobility, financial, social, and honor-based constraints, rates, and systems that operated there, as well as simply the life that they led.Their families, their widows and orphans, the rates of nobility, the types of nobility, and the geography of nobility, come next, then religion, and advancement and promotion in the corps. Finally the book ends with the near-extermination of the officer corps in the Great War, among horrific casualties, the destruction of its previous nature, and yet incredibly the survival of its spirit and ideals which persisted long after the guns of the Great War had at last fallen silent in 1918, as the same ethnically non-denominational, monarchist, and tolerant officers who had once formed a ring of swords around the throne of Emperor Josef now had to find their life in the independent states.

While the book is a historical tome, the author has a quick and clever whit which often pervades the work, producing a host of excellent quotations, both from their historical point of view but also for amusement and curiosity. Describing the 1848 revolution for example, he recounts the words of the Hungarian aristocrat Count Majlath that "The King of Hungary declared war on the King of Croatia, and the Emperor of Austria remained neutral, and all three monarchs were one and the same person." The large paragraph listed at the top is just an example of his brilliant ability to find idiosyncrasies, ironies, and oxymorons, which he relates throughout the book. They come at unexpected times : the author relates anecodtes about Emperor Franz Joseph in his favored astriks at the end of pages, or he relates that Empress Elizabeth favored one of the officers in the quick phrase "the passionately Magyrphile (and reputedly (and, reputedly, passionately Andrassyphile) Elizabeth", characteristic of is penchant for a quick turn of pen.Certainly it is no thrilling novel, but the author lays out his subject with diversions and a narrative style which do not detract, but rather add, to his historical work.

This doesn't mean the author doesn't go in for details and statistics. Every chapter there is a fascinatingly complete list of statistics, ranging from what languages officers spoke (both national and foreign languages like French and English), to their religion, student payment fee categories, to their parental lineage, to ethnic groupings of the realm, to reserve officer compositions, to breakdown by grouping, to promotion, to ranks. It is an incredible amount of detail, spread out over decades, and with explanations for why they developed in their ways. The author is not merely content to state what happened to the Austro-Hungarian army, but rather explains why. Indeed, this willingness to go above and beyond in explaining his case and providing detail is what makes the book so excellent : without his explanation of the nature of ethnicity in the Austro-Hungarian Empire, ill-defined, flexible, and arbitrary, something constantly reinforced by his examples, citations, and quotations of actual Austro-Hungarian officers and men, much of the central thesis of the book would have been fundamentally unimaginable to our modern eye used to the idea of nations and nationalism as all-pervasive and organic.

If there is any flaw in the book, it is I feel in the eternal question of the relationship of the army to the nation, the effect that it has on it. Deak makes a convincing argument that the Austro-Hungarian officers corp was no German force leading over Slavic slave soldiers in a crypto-nationalist German agenda, and not even a truly multi-national force, but instead somebody that transcended, or perhaps predated nationalism, driven by training, social ties, professionalism, common language, and social values. Supranational, in both deed and name. But what was the effect that this had on the general population? This is covered to a small amount in the beginning, with the reflection upon the effects that the army had upon the men that it took in, giving them their first taste of a wider world, new standards of hygiene, education, and skills. But how did it affect their own development of nationality and mentality? Another book I am reading, Tactics and Procurement in the Habsburg Military 1866-1918, notes that :

"According to Habsburg offcers, not only could an Austro-Hungarian military united in love of fatherland and monarch carry out successful offensive operations, but also compensate for inferior numbers. Therefore, k.k. offcers increasingly advised their comrades to take on the role of teachers for the rank and fle coming from so many ethnic backgrounds within the empire. Only offcers could perform the vital social task of educating the population in love of monarch and fatherland, performance of duty, courage in the presence of death, and repression of selfsh nationalistic feelings.48 Because offcers as true patriots had no nationality or politics, the corps was the perfect group for transmitting the military spirit to recruits and, thus, the rest of society.49"

I would have enjoyed having a chapter relating to this in full depth, although the author did note often that there were difficulties in covering such matters due to the lack of memoirs and records.

This book is one which writes itself in a title which is narrow. "A social and political history of the Habsburg officer corps", is not that impressive. A far less ambitious undertaking could have dealt with the first few chapters of the book, relating to the political disputes of the Austro-Hungarian army and their effect upon the officer corps, and provided some ethnic statistics, and then have been done with it. This book goes far more, delving deep into both the composition of the officer corps, but also its changing relationship to social values, its mutation and development throughout its history and the Great War, its existence after the war, the nature of nationalism in Austria-Hungary, Jews in Austria-Hungary (something it also poignantly remarks on regarding their fate after the break up of the tolerant and multi-ethnic empire into the brutally xenophobic orders which came after, Nazi Germany at their peak) even to some the nature of life, ideology, and the broader place of the army within the state. For anybody interested in nationalism, in Austria-Hungary, and European militaires before the Great War, it makes for splendid reading, something which manages to be fascinating and to leave one emotionally moved at the end, despite the reams of statistical data and the intensity of its investigation throughout. There are few books which could have done such a tribute to such a maligned army and empire.

5 stars for Beyond Nationalism 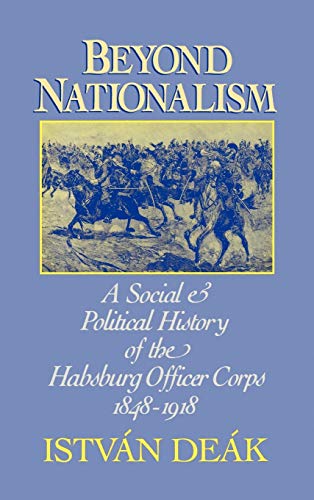 Beyond Nationalism: A Social and Political History of the Habsburg Officer Corps, 1848-1918
Buy Now