Martha Summerhayes came to the Arizona Territory as the young bride of Lt. "Jack" John Summerhayes who served the U.S. Army in the 8th Infantry. Martha wisely stated that she "joined the Army" when she married Jack, and indeed as her memoir Vanished Arizona proves, she had. Her "recollections" or memoir of frontier life at numerous Army posts in the Arizona Territory is detailed, full of adventure and often humorous. Martha wrote Vanished Arizona 30 years after her Arizona adventure when she was in her sixties, so her writing is somewhat romanticized. That said, her account is not unrealistic. One has to admire the cultured young Martha who was born on October 21, in Nantucket in 1844. She was educated, and used to having servants. Martha spent two years studying literature in Germany where she admits to falling in love with the "glittering" military uniforms worn by officers in the Prussian army.. She was not able to cook, and given her Victorian upbringing, and it is a wonderment and a testimony to her character, that she followed Jack to the wild West where Indians were "hostile" and temperatures reached over 120 degrees in the summer.

Jack was also born in Nantucket, and Martha describes their marriage as having married her "old friend" Jack on March 16, 1874. Summerhayes was ten years older than Martha and was a Yankee Civil War veteran. ( By 1874, the Arizona Territory had a population of 10,000, which is an arbitrary figure, since many times, women and any person not an Anglo was not counted in the census. The culture of Native Peoples who had lived in the area for generations could not stop a post Civil War influx of settlers from grabbing land, which led to many conflicts. These conflicts led the United States government to establish various Army forts such as Ft. Whipple in Prescott, Camp Apache, Ft. McDowell just west of Phoenix, and Ft. Lowell in Tucson.) In addition to those wanting to farm the land, mining interests drew a number of people hoping to establish mining claims and get rich quickly. A few months after their marriage Jack's 8th Infantry was ordered to Fort Russell in Cheyenne in the Woming Territory.

Martha's first lesson in Army life was that because Jack had more rank in the Army, another lieutenant's family possessions were moved out, to accommodate Jack and Martha. She is told not to feel any pity for the family who is moving, because this is a way of life in the Army. She is also shocked to learn they will be living in three rooms and a kitchen which is two rooms more than is usually allotted to a lieutenant. Martha resolves to create a "pretty home" and describes buying furniture and hanging lace curtains, but when she requests cooking utensils, Jack sends her to the Fort Quarter Master as he states that when they move, they will only be able to take 1,000 lbs. Of course the utensils Martha received were those intended for a Mess Hall. In her first attempts to cook, the results are classic "new bride" failures. As the reality of housekeeping becomes clear, Jack tells her that she must learn to cook. Lest the reader feel too sorry for Martha, while there are no "proper servants" available" a "striker" is available to handle lighting the fire and washing the windows and each Fort had a laundress. One memorable event while at Fort Russell was that in the spring while they were sleeping with the window open, a wildcat lept through their bedroom window and onto their bed.

Orders came through that they were called to Fort Whipple in the Arizona Territory. The Summerhayes traveled to San Francisco by railroad as there were not any overland roads from Wyoming to Arizona. From San Francisco they traveled on an old stern-wheeler steamship up the Colorado River. The extreme June heat forced them to sleep on the deck even though the scurrying of rats prevented them from sleeping. Martha describes the smell of the meat the ship is carrying which has gone green. At the port of Guaymas, one of the seasoned Army wives suggested a trip ashore for a real meal of chicken, biscuits, butter, and coffee with milk. The voyage from San Francisco to the mouth of the Colorado took 13 days. During the voyage, Martha wrote about the death of one woman and three soldiers. Martha's writing expresses her fears, however, her descriptions of the desert lands, the heat and eventually the beauty of the the lower Grand Canyon, boarding a wagon, and camping through sand storms,describe early Army life in the Arizona Territory from a woman's point of view which was indeed very rare.

Martha describes a dinner given for them by Mrs Crook, the wife of General George Crook, and later when she meets the General, she wrote that he was indifferent to her. What is repeated over and over is the kindness with which the seasoned Army wives treat their guests whom they have never met before and a transformation seems to be taking place in Martha as she is looking forward to repaying others someday. From Camp Verde (to become Ft. Verde) the wagon roads are extremely rough, and Martha is shocked by the constant lashing of the mules and the oaths sworn by the teamsters. In addition to the dust and hardships of riding and walking the presence of Apache warriors is a reality. Once at Camp Apache, Martha gives witness to the distribution of foods to those captured Apaches under guard. Her description of their features and their "extraordinary beauty and picturesqueness of their aboriginal dress" is almost as good as viewing a photograph. Attending an Apache ceremonial dance impresses Martha, but not in a good way and she and the other wives depart the "horrors." This is at odds with her other favorable descriptions of the Native Peoples she encountered.

At Martha's first dinner party given with the aid of a cook, Martha serves oyster pattys from canned oysters which is an unlikely choice, but she is thrilled that her guests enjoyed them. Mail came to Santa Fe by rail and then to Camp Apache by horseback rider, but other than dining with other officers and their families there was little for a woman to do. Since pregnancy wasn't discussed, it almost is a surprise that in one sentence, Martha says,"In January, our little boy arrived." Since he (Harry Summerhayes) was the first baby ever born to an officer at Camp Apache, the event caused great excitement. A group of Apache women arrived on the seventh day, bearing baskets and a decorated cradle board for the baby. A laundress at the fort helped Martha bathe the baby once a day but following the birth Martha describes herself as helpless, probably experiencing what we would call postpartum depression today.

In the later chapters, while life is still as hard, Martha gains an appreciation of Army life, not as glittering uniforms, but as it really is. Some historians see her transformation as someone who had dropped their fear and had become "plucky." One episode that I'm personally fond of was her meeting with artist Fredrick Remington, whom Martha describes as "not usually attending dances", but who loved the Army and was willing to make an exception for Army functions. The end of Vanished Arizona finds the Summerhayes family back in the Nantucket/Boston area.

Years later, Martha returned to visit Arizona, and she lamented that it had become too civilized and that she loved the early days of Arizona when she and Jack had been "Lieutenants together, marching across the deserts and mountains." Vanished Arizona remains not only one of my favorite Arizona based books, but one of my favorite books which I've reread many times. Vanished Arizona was originally published in 1908, and the book was a success. Then, after a second edition, the book was out of print until 1939. Since then, several editions have been printed.

*As a fitting post script, there is an article in Arizona Highways magazine, June 2001 issue on Martha and Jack's great grandchildren, who visited the places where Martha and Jack had traveled and lived. it was good to know that while many things in Arizona had indeed vanished, some remained. 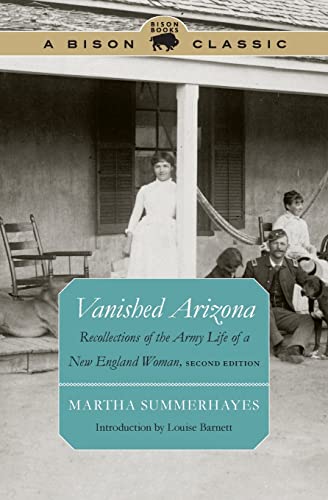 A Visit to Arizona's State Capitol