An Alternative History of Glasgow : St Mungo and the Dark Ages

Despite his summary dispatch on horseback St Ninian had a profound effect on Christianising the Scottish people. He probably inspired St Mungo to have a go at the community of Cathures.

St Mungo was also known as St Kentigern (or Cynderyn) to fool the Inland Revenue as the Church wasn’t above the tax yet.

His background is quite interesting as his mother St Thenew, also known as St Thaney as a tax dodge, was the daughter of the Brythonic king, Lleuddun who ruled in the Haddington region. She became pregnant, after being seduced by the dirty scoundrel Owain mab Urien which enraged her furious father.

In the tradition of enraged Scottish landowners who find out their daughters are up the duff he had her thrown from the heights of Traprain Law, which was a very large hill.

However she survived and was then abandoned in a coracle which is a little round-shaped boat for those who can’t tell their port from their starboard.

It also serves as a useful receptacle for communal porridge-eating sessions. In the coracle she drifted in a slow spinning motion across the River Forth to Culross in the county of Fife.

This proved to be an early prototype for Aquatic Theme Park Rides, although not recommended for pregnant women. It was at Culross where Mungo was born, out of wedlock and abandoned by his family.

At the age of twenty-five, after he gave up the booze and the fags, Mungo began his missionary labours on the River Clyde. Based on the site of modern Glasgow, he built his church at the confluence of the river and the Molendinar Burn and got frequently flooded. This meant he could work from home during baptisms.

For some thirteen years, he laboured in the district, unlucky for him as he lived a most austere life in a small room. But he made many converts by his holy example and his preaching performing religious miracles in old Glasgow which are shown on the city coat of arms.

The following verse is used to remember them and to celebrate his passing the saint’s exam:

Here is the bird that never flew ,

Here is the tree that never grew

Here is the bell that never rang ,

Here is the fish that never swam

These apparently useless and dysfunctional articles refer to the following stories:

The Bird — Mungo restored life to the pet robin of Saint Serf, which had been killed by some of his fellow classmates in the Culross monastery. They were jealous of him for being a tiresome swot and hoped to blame him for its death. After that the robin attacked the classmates at every opportunity and Mungo was voted best in class on pain of death.

The Tree — In Saint Serf's monastery Mungo had been left in charge of a fire, a very serious duty. Lying next to the comforting warmth of the fire he fell asleep. He woke up wondering why it was cold and realised it had gone out. Taking branches from a tree, he ably managed to re-start the fire as he’d been in the Boy Scouts. This became known as the ‘Great Underwhelming Miracle of St Serf’s’.

The Bell — this is thought to have a gift from Rome given to Mungo by the Pope. The original bell no longer exists, and a replacement, created in the 1640s, is now on display in Glasgow. Therefore visitors can come to Glasgow and see a 360 year old bell which has sod all to do with St Mungo.

The Fish — refers to the story about Queen Languoreth of Strathclyde whose husband. King Riderch suspected of infidelity with a young soldier. He was probably right as she did spread the love about and couldn’t resist a man in a uniform.

He demanded to see her ring, which she had given to her lover as a gift. In reality the King had already thrown it into the River Clyde after removing it from the sleeping soldier’s hands when the latter was on sentry duty.

Faced with being throwing off the nearest cliff, in the Scottish tradition, she appealed for help to Mungo. He immediately ordered her messenger to catch a fish in the river. On opening the fish, a salmon, the ring was miraculously found inside, which allowed the Queen to clear her name.

Unfortunately the messenger ate the fish as he hadn’t considered the possibility of training it to catch more jewellery. The grand era of Scottish entrepreneurship was many centuries ahead

In old age, Mungo became very feeble and his chin had to be set in place with a bandage to stop him dribbling. He is said to have died in his bath on 13th January 603AD. Although another source claims he actually fell into the font during a baptism. We think he was back on the drink again.

On the spot where Mungo was buried now stands the cathedral dedicated in his honour. His remains are said to still rest in the crypt. And today the city has adopted his catchphrase as the city motto.

This quickly caught on among the local trendsetters of 6th century Glasgow.

The history of Glasgow during the Dark Ages is aptly named because none of the supposedly smart-arsed academics around the world have a clue what went on then.

Blame has been laid at the door of the Danish since they are considered to have largely controlled the country during this time. What they knew that the much more refined Romans didn't is anybody's guess and not just smart-arsed academics.

At least the Danes with all their indiscriminate pillaging did manage to unite the various Scottish tribes that existed at that time.There's nothing more effective at breaking down internecine hatred than providing some foreigner to hate instead. Thus it was that the Scots and the Picts banded together against the Vikings.

But just to add to the confusion the make up of the Scottish people comprised the Britons who were Welsh.

They ruled the West of Scotland including the territory of Glasgow from their ancient capital of Dumbarton, which is around 15 miles west of Glasgow.

Also in the early 6th century there appeared the 'Scoti' tribe who sailed over from, wait for it, the North of old Ireland.

So there were too many Kings and too much trouble going on between the lot of them until, its reckoned, the 790's when longships were spotted coasting gently along the Clyde Coast. Scotland was a major visitor attraction even way back then.

"On your knees, wretched Scotsmen" screamed Hargald the Gurgler, "Do not resist for we are here to take your land".

"Who the hell are you then?" asked a vanquished Scotsman,

"We are the Vikings you insignificant toad"

"Five Kings?" said the vanquished Scotsman, "We've got enough of our own without you lot thank you very much"

"Vikings!!! Vikings!!!! not five Kings, we are the sacred Sons of Odin and harbingers of your downfall" raged Hargald, "Now! take us to your King"

"What do you mean which one?"

"I told you" explained Jock, the vanquished Scotsman, "We've got loads of them here"

"Who's this lot?" asked Dougall, another vanquished Scotsman,

"They say they're Vikings"

"Five Kings?" said Dougall, "Did they follow a star then" he added, since he'd recently been converted,

"Don't get them riled" advised Jock, "They might be taking charge here"

"Not again" moaned Dougall, "Bloody multi-nationals are taking over the place"

"Well, I told him we've got plenty of Kings already"

"But this cannot be" said Hargald, "Surely you have but one Overlord for all your worthless peasants"

"Nope! but there's a few bits of land here and there that are up for grabs"

"Aye, mostly up North and around the islands"

"Ohh!, then you'll need to book some meetings then and thrash it out"

"Yes! Thrash we will, to within an inch of their scrawny disgusting lives!!" roared Hargald, "Where is the nearest of these Kings of yours"

"Over in Dumbarton" Jock answered,

"No! he's not there today" Dougall corrected, "He's over in Glasgow opening a new fishmarket"

"Ah Ha!! then to Glasgow we go" exclaimed Hargald, "And I will fillet your fishy King with the sharp steely edge of my sword and throw his royal carcass to the dogs that they might gnaw on his bones"

"Well, watch yourselves, it's a rough neighbourhood" warned Dougall

"We care not” sneered Hargald, “We will now set sail upriver"

"You won't get far in that" said Jock pointing at the longboat,

"The Clyde is too shallow, you'd get stuck on mudbanks in no time"

"Well then, I command you tell us how we get there"

"Easy" said Dougall, "You could jump on your camels and follow that star"

In the 9th century a significant battle took place in 839AD when an unknown Pictish King was killed along with his brother. However, it seems that between 810 and 858AD the area was ruled by the 'King of the Picts' Kenneth MacAlpin.

So on the face of it, Scotland seemed to have the royal equivalent of the modern boxing fiasco of four or five different World Heavyweight Champions. Instead of fighting the Vikings they should have slogged it out first with each other over fifteen rounds to sort out who was going to be in charge.

What is perhaps more certain is that Kenneth's son Constantine ruled from 862 to 877AD.

Lucky for him that he was in power or else he would have had a hellish time getting by in Dark Age Scotland with a fluffy, girls-blouse of a name like Constantine.

As it was it was the rule of the Dumbarton Kings that had it hard when in 866 they were turfed out by the army of Olaf the White, the Norse King of Dublin and second cousin of Gandalf the Grey. He ruled Dublin with his kinsman Ivar the Boneless, who fell down a lot. The locals hadn't a clue what was going on.

After the fall of Dumbarton a new capital was established at the confluence of the Clyde and Kelvin rivers. It was called 'go-bann' which was the Celtic name for 'small peak' as there was a hill at the site.

This later became the independent burgh town of Govan until it was eventually swallowed up by modern Glasgow. It is now a quiet troglodyte sanctuary near the far reaches of the city and is gradually returning to the Dark Ages.

Throughout all this upheaval Glasgow remained part of the Britons' Kingdom of Strathclyde ('strath' meaning 'valley') until the 11th century. However, after the death of King Owen of the Britons in 1018 it was absorbed into the Kingdom of Scotland under Duncan, grandson of King Malcolm of Scotia, king of the Scots and Picts. In the Battle of Carham in 1018 Malcolm had routed the Angles of Lothian.

So after straightening out the Angles he became the most powerful man in Scotland and able to unite the Four Kingdoms under one throne. Scotland in the early 11th century had finally become a single nation and Glasgow was about to get back into the history books of smart-arsed academics. 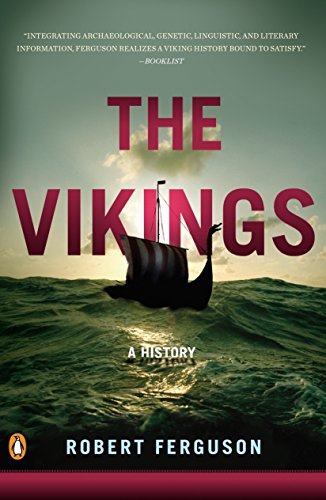 The Vikings: A History
Buy Now