An Alternative History of Glasgow : The Roman Occupation and Early Christianity

An alternative history for the least-easily offended.

The area around modern Glasgow in Scotland has hosted communities for millennia since naturally with a river nearby it was a source of fish for many village communities.

The origins of the Glasgow people is said to be a mixture of Northern Irish, Welsh and the odd Viking to bring a hint of ginger to the local hairstyles.

Also, Archaelogists have studied the remains of a canoe that was dug up out of the ground in Glasgow only 20-odd years ago and discovered that it was full of holes.

Just before they launched it in the Clyde River. These holes were very old, some of them stretching back about 14 inches which dates the craft at around 2,000 B.C or something like that.

But they did discover that it came from the Iberian Peninsula as it had a ‘Feito em Lisbon’ sticker under the hull and shards of a sangria bottle imbedded in the side, presumably from the launch. So it seems that the Glaswegians have a strong Hispanic heritage which explains their fondness for package holidays in Majorca and the Algarve. There’s no place like home.

Of course the Romans were present in the area after they sailed over the channel in XXXXIII A.D. although they were very unwelcome visitors and never got a moments peace from the rowdy Picts.

So much so that they kept building walls to keep them out. It was a lucrative era for the building trade and a handy time to be a quarryman or a brickie.

Obviously these had to be very high walls to stop the Picts climbing over them and the pole-vault hadn’t been invented yet.

Or if it had then it hadn’t spread beyond Greece where the locals were enjoying the Olympics every few years while the Romans were out touring Europe and beyond.

The walls had to be very long as well or else the wily Picts would have just walked around the side much like the German Panzers did in France with the Maginot Line in WW2. If the French High Command had read more Asterix comics instead of whoring it up in their country chateaux headquarters between visits to a well-stocked wine-cellar then they might have learnt something about foreign invaders.

But I digress, and not for the last time I warn you. In the area of the Clota which is what the Romans called the local river there was indeed built a wall for the exclusion of the troublesome natives. This was around CXL A.D. It was called the Antonine Wall and like its more illustrious predessesor Hadrian’s Wall it was named after the Emperor at the time, Antonius Pius and dead chuffed he was too.

Nobody told him that the Picts pissed up against it on a nightly basis and the graffiti was very un-Christian. Not that that really mattered to them as Christianity hadn’t arrived so they could still have fun while they could. But Antonius Pius had never had a wall named after him before, so he knew he’d finally arrived when he received this surprise birthday present:

For he's a jolly fine emperor.

“And where is this great wall that bears my name?” asked Antonius Pius

“It’s in the South West region of the land of Caledonia your Imperial Majesty” said his consort,

“And where’s that then?”

“Well can you find out, I’d like to go and see it tomorrow”

“Oh that won’t be possible your Imperial Majesty”

“Because I think it may be over near Constantinople somewhere, many, many days travel”

“Constantinople? Are you certain?”

“You imbecile, does anyone know where my birthday gift lies”

“It’s in North Britannia your Imperial Majesty” said a centurion who had only recently returned from the place in question.

“No sire” said the centurion, “I’ve only recently returned from the place in question.”

“Well that makes up my mind” said Pius, “Have it moved somewhere warmer”

“Ohh, could be a bit tricky sire”

“You dare defy me centurion?”

“Oh Jupiter forbid!!, Jupiter forbid!! your Imperial Majesty” he replied “It’s just that if we shift the whole shebang lock, stock and barrel then those Picts are gonna run riot”

“Of course!, of course! your Imperial Majesty, but they’re still a right handful you know”

“Yeah! A more undisciplined lot you’ll never see on the field of battle. They don’t follow the rules you see”

“They don’t follow the rules of combat, don’t play the game. They flail about screaming ‘Come ahead ya Roman bamsticks’ swinging them big swords, lifting their kilts and flashing their.......”

“I get the picture centurion, it must have been very difficult for you all”

“You can say that again sire, one of them swords almost sliced my scutum in half”

“Oh my word, would you like to sit down”

“Go and fetch my wall”

The Picts are de-mobbed

The Romans must have left in quite a hurry considering all the odds and ends that they left behind in their wake.

There developed a roaring trade in bric-a-brac stalls at town and village markets all across the country.

There they spent their time drinking heather ale and tonic wine whilst annoying old ladies passing by.

It was bad enough for the old dears having to gather peat blocks from nearby fields or carry bags of slate and such like to repair their cottages without idle and sarcastic war veterans giving them abuse.

“Awright old yin? Was it that big bag that made ye go bandy-legged” they would taunt

“Aye listen!! We were better aff wae the bloody Romans” she retorted

“Hey, that’s oot of order, we fought for you ye know”

Things changed forever though with the arrival of a monk called Ninian who later became Scotland’s first saint. Luckily he wasn’t aware of this at the time as he was an insufferable big head on most days.

He was born in Galloway and educated in Rome where he was later made a Bishop by Pope St Siricus. Ostensibly to preach the Catholic faith but in reality just to get shot of him and send him packing back to Scotland.

Otherwise not much is known about him apart from what people have made up.

Apparently his missionary, evangelical work began at the end of the 4th Century AD. However one source states that he founded Scotland’s first monastery in 500AD.

Since another source puts his birth at approximately 360AD it would be a fair estimate to reckon that he must have lived to be at least 150 years old. Little wonder that he was later canonised as the Patron Saint of Bingo Halls.

However these historical discrepancies notwithstanding it is an accepted fact that in 397AD when Ninian returned to Scotland. He founded the ‘Candida Casa’, a whitewashed stone-built church which in English translated as ‘White House’ so the Picts should have been warned to expect trouble.

But in the language of that time it was known as ‘Whithorn’ and pilgrimages are still made there even today. The local shops are awash with wonderful souvenirs such as Holy Bible fridge magnets, inflatable crucifixes, and “St Ninian was a Dude” t-shirts.

St Ninian was celebrated for various miracles that he performed when he wasn’t running around converting the natives and building churches. Apparently as a punishment he blinded King Tudvael in a fit of temper and then cured him again when he was in a better mood.

Then there was the occasion of the providential growth of leeks just in time for Sunday soup. His housekeeper was delighted.

Also the miraculous umbrella which saved his book from the rain and in commemoration of this event you will still see Scots gathered in the streets of their towns and cities carrying umbrellas in their thousands.

Of course, there were various run-of-the-mill cures of the blind, leprous and malformed as well as other bog-standard parlour tricks.

But even after his death, there were subsequent cures associated with a visit to his grave. Then there was the acquittal of a priest accused of fornication, but that doesn’t get mentioned much in the history, although no altar boys were believed to have been involved.

Before all this pallaver it seems that in 380AD on his Christian missionary travels St Ninian, passed through Cathures. This was was the name given to the little area that later became known as Glasgow.

It was here that he decided to consecrate a local burial ground much to the interest of the local folk. Initially they kind of liked him and even called Ninian by an affectionate nickname:

“Oh I see, you are agreeable to my request to consecrate this ground”

“No problem” said a local fisherman, “Sound like it’ll be great fun”

“What’s he doing?” someone whispered,

“I think he’s planted some leeks” another said

“I’ll need to get some tips from him, my cabbages didn’t do too well this year”

St Ninian then proceeded to mutter some words in Latin from a book and nod his head a lot before turning to the assembled audience declaring;

“My work is done, this ground is now hallowed earth, God bless you all for attending this consecration, may you all go in peace”

“Is that it!” shouted someone incredulously

“Yes!” replied St Ninian, “I have completed the Lord’s work”

“Bloody hell, we were expecting something better than that”

“Yeah! We thought there would be a big bash. You know music, dancing around the fire, roast oxen over a spit and all that with loads of booze as well”

“These are Pagan depravities which must desist henceforth. I bring you the word of God and alllllll ooooooooohhhhh……..”

“Unhand me you heathens” Ninian protested

“Get on that horse and on yer way”

“Piss off and don’t come back”

Thus was explained why St Ninian just passed through Cathures and didn’t remain to build a new church that the locals might give praise This was much to the relief of the local grandmothers who had enough work to do. Instead he rode off into the sunset to the cheers of the local populace who had a farewell party in his absence. 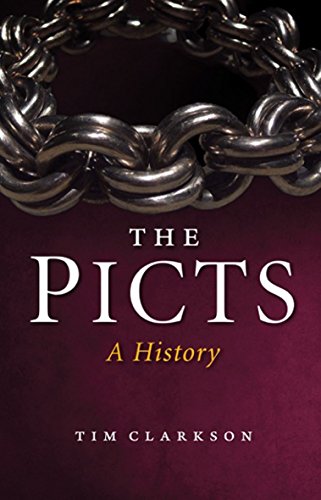 The Picts: A History
Buy Now