In Frank Miller’s graphic novel, Batman: The Dark Knight Returns, Bruce Wayne is at an age where crime fighting is difficult; his health is not on his side and the public’s support for his work is diminishing. He constantly states that “this wouldn’t be a bad death.” With the help of a thirteen year-old, female Robin, Batman is able to still fight crime, but barely lives through each battle.

Miller uses juxtaposed panels of Batman’s storyline and interjections from the television. He allows us an inside view into the world of Gotham television. Because of the four-year writer’s strike, normal programming is substituted with free speech. The criminals, doctors, newscasters, police, civilians, etc. all speak through the television. On page 69, we become attached to a female character on the subway train. The very last panel is a newscaster, emotionless, saying, “Woman explodes in subway station—film at eleven” (69). The media attempts to sell us ideas, breaks panel structure and storyline to interject with what we should be watching later. Miller strategically places these TV panels throughout his novel to show the media’s behavior and also allude to Batman’s storyline.

On page 116, Gordon is giving a speech about the new, female commissioner. She is half his age and qualified. Miller juxtaposes these statements with images of Batman with Robin. If we weren’t matching text to image, we may assume that the text is referring to Robin. On 129, Robin makes up for Batman’s old age. She saves him with grace, alluding to the fact that she will be his predecessor. Miller uses the media in a similar way when he places Batman in a triumphant stance on page 118 while the TV talks about the president. 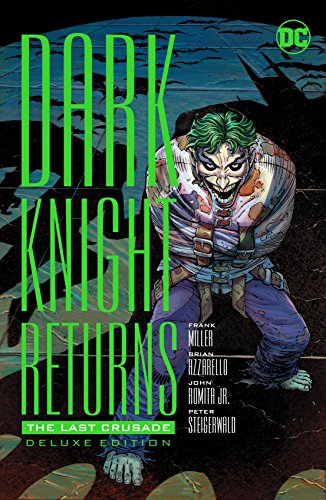 Miller also asks his reader an important question: is it right for Batman to do the same things the Joker does, but for good? The television debates this question throughout the whole novel. Bruce Wayne says, “we must believe that our private demons can be defeated” (17). Here, he is talking about Harvey Dent (Two Face) and the psychological help Wayne funded to help him become a better person.

Unfortunately, Wayne needs to defeat his own demons. He commits crimes to prevent larger crimes, yet his inspiration comes from his parents’ murders. When he descends into the rabbit hole on page 17, he sees the bat for the first time. In this panel and later panels throughout the novel, Miller shows us a demonized-looking bat. This bat is Bruce Wayne’s demon, and he comes to only defeat it with his (fake) death.

The question of right or wrong comes again when Superman enters the plotline. Batman can see that Superman has done the superhero equivalent of “selling out.” Superman is a tool for the government to use, whereas Batman is a mortal and cannot sell out. Because Superman works for the government, he has no guilt or demons to overcome. Batman wants to do good, but the media’s attention and public backlash is too much at such an old age. He decides to fake his death, so he can help the world without recognition. (In my opinion, the best kind of help.)