A Short Review of "Three Peoples One King" by Jim Piecuch

Three Peoples One King outlines very specifically the role that the many different Native American tribes and nations had to play in the American Revolution. While generally the Native Americans are overlooked during this time period, Three Peoples clearly puts forth the notion that there was an extensive number of natives who fought with the British for many different reasons. Rather than simply stay neutral and wait until the victors of the war were decided, Native Americans were quite active in many campaigns led against the rebels. The author provides good details and supporting evidence for his thesis while presenting relative information in a way that is concise and knowledgeable.

The author genuinely makes history interesting for students of both American and world history; his book softly changes between an almost story-like format while keeping true to the facts and a more scientific approach to telling history. His argument is not bogged down by irrelevant points, and he does a wonderful job explaining what seem to be the less important details quickly but thoroughly.

He explains different Acts and names very well without delving too deep into information that may not be relevant to his argument so that the reader can understand what is being said and done without being overwhelmed with facts. The style of writing is appealing; it is not dry and tedious with lists of facts one after the other, nor is it written almost entirely in a story-line format. Three Peoples is written with a good balance and mix of what is needed to know to get the point across, but without amassing so many different points that the reader is lost trying to understand them all individually, as well as relating them to the subject at hand. This effect stays strong throughout the book, though it weakens slightly in the middle chapters where there seems to be slightly less support for some of the arguments than there were in the beginning and towards the end.

Overall the book is very interesting on a relatively less-known aspect of the Revolution; though centered around the southern region and colonies of the Deep South rather than looking at the whole of the colonies, this allows for the division of Florida into its East and West colonies to be much more easily understood and focused, unlike many other southern-oriented books. Three Peoples One King is well-researched with dozens of pages of endnotes and an equally long list of sources that all come together to form this view of the British campaigns in the American Revolution, and does an efficient job of challenging the traditional views of British southern strategy. 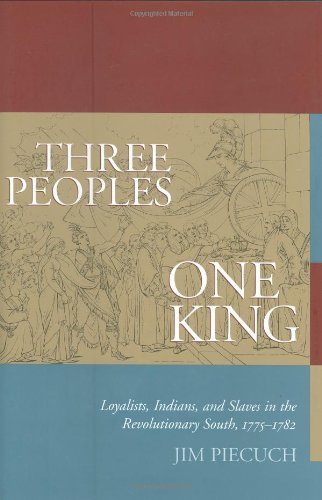