A Wee Ramble into English Countryside

We got up early in Chittlehamholt, Devonshire to have a spartan breakfast of coffee, toast and quince jam. My friend Jonny Boucher called for his dog Rougus, a brown and white springer spaniel, and off we trekked on a wee ramble from his manor home with its fruit orchards, netted berry gardens, and plentiful flower gardens down to the hay fields to a nice woodland trail. Our old pal Gordon Fader from Connecticut merrily accompanied us.

The previous year Jonny and Gordon had come to my wife's old homestead in Ireland to hike up Mullyash Mountain and fifteen years earlier to our Colorado home to climb Mount Princeton to its over 14,000-foot summit. But now we ambled down a trail into a peaceful Devon forest of giant beech trees and oaks laced with shiny holly bushes and a lush ground cover of bracken ferns, mosses, stinging nettles and yellow and white composite flowers.

We stopped to take a close look at Himalayan balsam blossoms, pink in color with broad green sepals. Its seeds had been brought back to England from Nepal in the 1800's and had spread luxuriantly throughout southern British forests as an Asian remembrance of days past. Both Jonny and I had lived in Asia years before and this plant sparked memories of China and Japan. We could hear the flow of a small stream far below down forested slopes. How different from the roaring Colorado streams coming off Mount Princeton's snowfields. A panting Rougus happily led the way along our trail.

We stopped to observe a twisting, choking ivy vine curling its way up a small oak tree. I was reminded of strangler fig vines in the forests of the Florida Everglades. Jonny explained that these vines can indeed strangle the life out of trees here in England. If he saw them up at the manor, he would pull them off his trees.

Our trail turned sharply to go straight uphill passed a giant white beech tree rising sun-ward in bright blue skies looking like some of the large beech trees on Mount Monadnock, New Hampshire. After some huffing and puffing up the hill we arrived at the edge of the hay fields once again to stop and see gleaming and prickly whinn bushes lining the fenced fields along with brambling blackberry vines. Rougus wagged his tail ahead of us as we followed the fence line toward the manor road.

I was surprised to see an ols hay raking machine from the 1950s sitting along the roadside fence. Its spiked wheels looked quite shop and ready for work if need be. It was pleasant to walk up to the manor house built in the 1600's and into its alcove to view a purplish and fuzzy cottonous tree beside a taller palm tree basking in the sun. Rougus entered the house looking for a treat as did we looking for a nice cup of tea with our wives who, by this time, had caught up with a nice chat of times gone by. 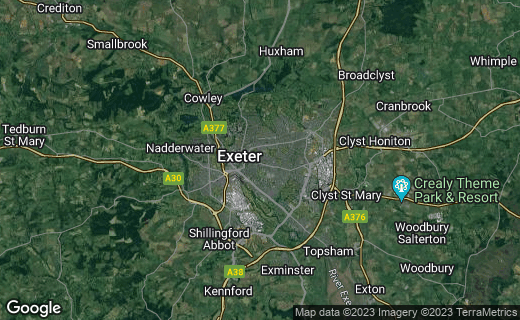