My First Camping Encounter With an Armadillo

My wife and I have spent years traveling around the US in our different motorhomes and along the way we have observed a number of strange sights, but this encounter was probably the strangest.

One Winter a couple of years ago, we were set up in a nice campground in Clermont Florida, not far from Orlando.

It was early afternoon and my wife and I had just returned from spending a couple of hours relaxing at the Swimming Pool,

The weather was nice, so we had stretched out in our lounge chairs beside the RV, with beer in hand, just enjoying the great campground atmosphere. We had been sitting there for about an hour when I noticed a movement out of the corner of my eye and directly behind my RV.

At first, just I said the Hell with it. I was comfortable and whatever it was that I had seen move was not going to get me to put my beer down, leave my comfortable chair just to walk around the RV and most likely find nothing there..

But, you know what they say about curiosity?

That movement, whatever it was, stayed there at the edge of my brain, just nibbling on my consciousness, until I realized that I would have no rest until I saw what was back there, behind my RV.

At this point, I should have had a cinematic flashback, because this was kind of like one of the basic rules of what not to do in a Scary Movie!

You know, investigate the unknown movement!

Camping in the land of Disney

Now on to the subject at hand.

My wife and I are retired and we travel around the country a lot in our RV.

We love the RV lifestyle and we search out interesting areas to explore and once we find a good campground we then park our camper there for a few weeks and turn our new temporary home into a place of adventure and often, surprises.

Eventually, once have exhausted the newness of our new area, we pull up the proverbial tent (my RV), and move on to another potentially interesting place.

Being a writer, sometimes, we will find something that I feel is truly unique enough to inspire me to write; a Poem, a Short Story, even a photographic tour, or whatever.

And whether the visit to the area was good or bad, long or short, I usually share my new creation with you; ‘O Ye Hapless Reader’ that you are.

Anyway, as I have said, we were in a campground in Clermont, Florida, near Orlando, the home of the famous four-fingered smiling mouse that wears white gloves, red shorts and a single suspender to hold his pants up?

Myself? I understand the gloves, kind of ……. Michael Jackson picked up on the idea, and did his thing with a white glove. Of course, he added some sequins and the famous moonwalk to cement a place in "white glove" history.

But the red shorts? I really don't have a clue what old man Disney was smoking when he came up with this combination of clothes …… for a mouse?

A book on the Hidden secrets of Disney World 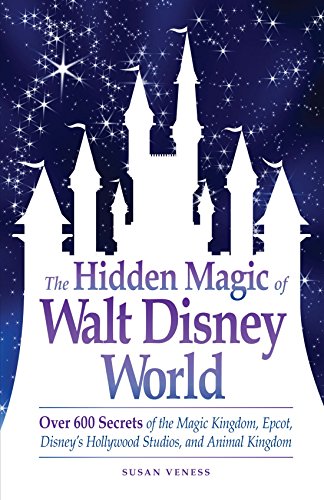 The Hidden Magic of Walt Disney World: Over 600 Secrets of the Magic Kingdom, Epcot, Disney's Hollywood Studios, and Animal Kingdom
I purchased this book for when I was camping in Clermont Florida, just a few miles from Disney World. The tips in it did save me a little money when I visited the resort.
Buy Now

Anyway, I finally reached the point where I just couldn't accept the suspense of not knowing what the noise was behind my RV, any more.

So, I reluctantly put my delicious, COLD, beer down and casually sauntered around the RV, and I came face to face with ......

In Florida? And, just a few miles from the Winter home of the great Mouse?

Having lived in Virginia, the Carolina's, and traveled around the world, I have seen a lot of things. But, I had never seen a real live Armadillo.

I was stunned to say the least, to be finding one of these ugly animals roaming my campground searching for crunchy snacks, and as I stood there, walking directly between my legs.

Later I found out that these Armadillos; live in the Sunshine state, Florida, and others across the South. They have sharp claws for digging along with sharp teeth and they subsist mostly on insects,

Also, they are the next best thing to being blind. But at the moment, I had no idea what they were, what they survived on, or how vicious or tame they might be.

The thing at my feet was about a foot long, not counting it's ugly, rat-like tail, and it had a long gray snout that was frantically sucking up ants.

Enjoying a kind of Ant-Tartare buffet, so to speak.

The insulting thing was that he (or she? I had no idea how to tell, and I wasn’t about to investigate.It didn’t even look up at me, and I was standing directly over it.

It ignored my feet and just kept on devouring the ants; a true armored eating machine.

But, after watching it for several minutes, the lack of respect for me …… you know …… as I was the big bad human being, kind of made me mad.

So I turned and went back into the RV, grabbed my trusty camera, and returned to the Armadillo as he kept at his feast, to record this arrogant pests presence.

As I made the turn around the rear of the RV, I looked and there my new ugly friend was, about ten feet away, still busily eliminating ants for the good of mankind.

I walked right up to him this time and took a few close-up shots.

I was fully expecting him to run at the sight of me, or at least at the sound of my camera shutter, like all the other good self-respecting animals that I had taken pictures of in the past.

By now, you see, I was really upset with this shelled cretin ignoring my presence.

So I figured that I would just keep taking shots, as I bent over and moved the camera closer and closer. I assumed that, at some point, I would have invaded his territory enough, and he would then, of course, run.

Thus, he would finally be showing me my due respect as the superior being on this planet.

I was finally close enough that the Armadillo filled the whole frame of the camera when, suddenly, he turned and looked straight at me.

Now, when you look at an Armadillo in a magazine or on TV, it is a pretty harmless looking, even though ugly, animal.

Too Close for Comfort

But, when you look at one of them, full-framed, through a camera lens, with all of the resultant detail these animals are a different thing, all together.

And, when one of them turns slowly, towards you, like this one did, I felt that the look in it's dim eyes seemed to say …. I wonder ….. what does one of those taste like?

Well, when that happens, survival instincts take over and you jump.

And for me that meant jump back, and away from the perceived threat.

And I landed ….. on my ample Ass, and sat there spread-eagled in the sandy Florida dirt, and watched this Jimmy Durante of ant eaters, meander ..... slowly ..... towards me.

Hungrily even, it seemed now!

I decided it was time to drag my old butt up from the ground and put some distance between myself and this strange inverted ashtray with four-fingered feet, and it's very sharp looking teeth, that I had just noticed by the way.

Note the four fingers? A distant relative of the great Mouse? From the wrong side of the tracks, perhaps? I suspect so!

Anyway, I made it to my feet in a flash (for me that is), and I quickly gathered myself, ready to perform a good, old-fashioned, Armadillo ass-kicking.

I stooped to grab it, strategically, of course, by the tail, and toss it to the winds.

That was my subconscious plan I guess!

There was no real forethought on my part, just a primitive call to action of some kind.

But I will never know what might have happened next.

Because right at that moment, another hapless ant walked by my Armadillo friend and he blindly but quickly turned and followed it to his next buffet meal. Slowly fading away from me with its long tail slowly shrinking in my sight.

I realized that I was obviously, just another insignificant shadow-caster in the world of this blind, armor-plated rat with a long nose.

What did I do then, you say?

Well, my Beer was still waiting, right beside my lounge chair, and I had some really good shots of an Armadillo, on my camera that I could now show my wife. I walked back there with my own swagger, having now re-established Man's superiority over the other members of the Animal Kingdom