Amarillo Armadillo is a rib house chain out West and is very popular. It is also the name of an animated movie projected for release in 2010. The film is about a prospector in the 1920s, an armadillo, and a horned toad - so, considering it apparently features some of the characters form stories around HubPages, it should be pretty good.

For the time being, an armadillo figures large in a a Central Texas mystery:

I discovered this one at my old friend - Half Price Books. Libraries are so patronized these days that there are hardly any books left on the shelves, except the reference room materials that can't be checked out. People are reading everything, finally - it's all free. It's amazing what a recession can do. If animals could read, they'd be in there too. They're popular places, even offering free refreshments some days and discounted coffee and soft drinks in others.

Having seen Kinky Friedman on television once or twice, I thought he was a political or pop culture writer, but I was wrong. He's a politically incorrect comedian and mystery writer that narrates through a cowboy Jew - himself, really - that performs with the group Texas Jewboys.

In the book series, the Kinster solves murders in NYC. In real life, he is an Independent that wants to be Governor of Texas.

I'm an Independent, but I don't think I could govern Texas.

If you're looking for a helping hand, try the one at the end of your arm.

Several literary amateur sleuths have cats helping them - James Qwilleran has Koko and Yum Yum, a small California town has talking Joe Grey and Dulcie, and the real-life Fred the Undercover Kitty that helped the NYC Police Department put away a fake veterinarian..

Kinky's cat seems only to give him dirty looks until the Kinkster solves a case. And she does not seem to have a name - just Cat. She does not speak like Joe Grey, but what she doesn't say fills volumes.

I am glad I started in the middle of this series of mysteries, because this one, No. 7, involves Kinky Friedman taking a vacation from NYC and going home to Kerrville, Texas to the Echo Hills Ranch for kid campers. All of this is real and very engaging.

Mr. Friedman uses a lot of his own life in his books, featuring himself as the protagonist and sometimes hero. After Reading Armadillos and Old Lace, I have a good frame of reference for understanding more about the characters when I begin with the first book in the series.

It is a treat to hear his back story and to see how Echo Hills has been not only fun but good for many children as well as the Counselors (called Uncles and Aunts) and Junior Counselors. It still operates and children still go there to summer camp. In this book, Kinky returns to help for the summer and is pulled into a melodrama of multiple murders.

Cat looks at him very disapprovingly until he gets the case(s) solved. During the course of the summer, an armadillo, usually shy by nature, hangs around Kinky's trailer and plays with the camp children, adding a childlike dimension of wonder and delight to the story. About the murders --

In Armadillos and Old Lace, old ladies are dropping dead on their 76th birthdays after receiving yellow roses, the sign of friendship. Beginning a couple of months before Kinky's summer return to Echo Hills Ranch, no one thought anything of old women dying except Pat Knox, the local lady judge.

Kinky On All Four Sides 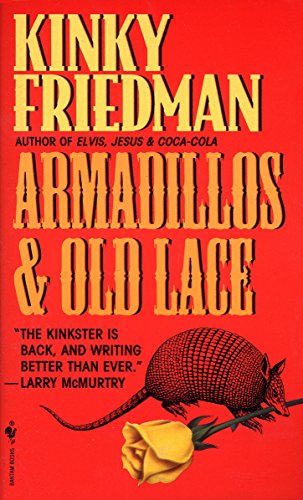 Dead at 76, with Yellow Roses

Kinky Friedman plays a private investigator from NYC that performs irregularly with his own non-politically-correct Western band between murders. He goes on vacation for the summer to the family ranch in – where else? – Texas.

Freidman’s parents in real life actually started the Echo Hill Ranch sometime after World War II. Family members ran it together with a staff of “aunts” and “uncles” and younger summer counselors until 1985, when Kinky’s mom died. His sister Marcie is one of the permanent camp counselors. As Friedman writes about this history in his book, we come to know him more fully and sense his sense of loss. This Echo Hill times were deeply fulfilling.

Kinky stays in an old green trailer at the camp, with his silent cat, Cat. It’s a real trailer, the site of his early novel writing and a way-station for a silent Armadillo called Dilly.

Kinky’s pickup truck talks, however, and is called Dusty. Dusty and Dilly and Cat are pretty good company, along with some of the smaller campers, a couple of camp counselors, and Kinky’s dad, Tom.

Finding a cat - or having a cat find you - can change your world as much as marriage, divorce, love, death, or even winning the lottery can, and sometimes more.

More Than You Bargained for

Kinky Friedman's Guide to Texas Etiquette: Or How to Get to Heaven or Hell Without Going Through Dallas-Fort Worth

This book is great for its humor as well as instructions for how to get along in Texas.

Other real-life characters populate this book as well. The Kerr County Sheriff, Frances Kaiser is a strong character in the novel and actual Judge Pat Knox plays a major part. She figures that not so many old ladies should be dying on their 76thbirthdays, but the Sheriff doesn’t buy it, and they put Kinky in the middle with his investigations. Friedman examines the judge’s files on the dead women by day and talks to pictures on his wall by night, and becomes convinced of foul play when the next little old lady dies on her birthday - with her lips tightly sewn shut. Each victim had received yellow roses on her last birthday and somehow must have a connection.

This book is quick to read and maintains a hold on your imagination and attention. The mystery trail to the rose-bearing serial murderer is pretty interesting, and the animals and talking truck give it a bit of homey fun. Kinky’s stage act is not politically correct, and some of the quips in this book aren’t either, nor are they all genteel, but those few remarks can be ignored for the most part. Just be like Cat and ignore him.