An Afrikaans poem of identity and the pain of exile

In 1960 a young Afrikaans poet, unable to continue to live in apartheid South Africa, left the country for a life of exile, like so many of his compatriots, for many of whom exile was not the voluntary choice it was for him.

Breyten Breytenbach, scion of a well-connected Afrikaans family, sadly chose exile and solidarity with those oppressed by the authoritarian apartheid state over his family.

Feathers and an iron cow

Breytenbach has been for many years a Zen practitioner. Many of his poems and paintings show the influence of Zen.

This gives his poetry a depth belied by the seeming simplicity of the words. The words flow conversationally and easily, and in the flow they reveal, by unforced juxtapositions, tensions which bring out emotions which, while I can feel them, I somehow cannot explain – they come from some deep place, some place that I can only think must be like the places reached by Zen. The words are indeed like koans and are meant to be felt, experienced, rather than understood intellectually.

I experience this whole poem as a koan, it moves me so that I cannot read it without my eyes tearing up, and yet I cannot explain the tears – they are just part of the experience of the poem, the beauty of the words.

This is my humble attempt to translate this wonderful poem from Afrikaans to English.

A Handful of Feathers

that when one day I came home

it would be unexpectedly at dusk

with the accumulated riches of years

on the backs of iron cows

Softly, quietly I open the gate to the back yard

but then he tail-wags recognition

Frits Kreisler will play sweetly on his violin

and the surprised windows begin to listen

or almost know from very far

leaning out with nighties full of smiles and elbows

people whose laps I peed on as a child

ma stands inside her heart stopped

(and where are the specs?)

dad wakes, confused, with a start

but mummy is already outside

with a dressing gown and red cheeks

And there I stand large as life

on the lawn near the cement pond

where the new outside rooms have been added

slightly worn out by the long journey

a smart suit on

with a carnation in the jacket

new Italian shoes for the occasion

my hands full of presents

But mummy knows it's me

and behind me my caravan

as befits a traveller from overseas

my wife and children bow-tied

each with three Boland words

a creditor or two

Just this side of the vineyard a meek rose grows

the mountains have gone grey

and the oaks thick

I had thought I would just be there

I had though how we would cry then

Fritz Kreisler maybe doesn't like such a long journey …

but if he can't come

sleep well with one ear open

wherever I plant a feather

a clucking hen comes up!

en agter my my karavaan

*Wagter- literally "guard" - is a common name for watch-dogs in South Africa.

The importance of memory

“En wat is mens tog behalwe 'n hoop herinneringe? (And so what is a person except a heap of memories?)” - from 'n Seisoen in die Paradys.

Poet, artist and author Breyten Breytenbach was born in the small Western Cape town of Bonnievale in 1936 near the southernmost tip of Africa, Cape Agulhas. One brother, Cloete, is a photographer and war correspondent while another, Jan, was a leading officer in the former South African security forces.

Breyton studied fine arts at the University of Cape Town.

After leaving South Africa in 1960 Breytenbach met and married a woman of Vietnamese descent called Yolande. This made his return to his homeland a difficult issue because of the Prohibition of Mixed Marriages Act and the so-called “Immorality Act”. He applied several times to the South African Government for visas for himself and Yolande, each time the applications were turned down.

Finally, in late 1972, Breytenbach and his wife were granted visas to visit the land of his birth: “Wat die oewerhede in gedagte had toe hulle ons visumaansoek toegestaan het, sal ek nie weet nie. (What exactly the authorities had in mind when they granted us our visas, I do not know).” - from 'n Seisoen in die Paradys (A Season in Paradise ), Perskor, 1976, written by Breytenbach using the pen name B.B. Lasarus.

Breytenbach describes their arrival in Cape Town most movingly, as one who has longed to see the land of his birth, and seeing it unroll under the wings of the aircraft excites memories which turn his Adam's apple into petrified tears (“Die adamsappel is versteende trane”): “Daar is nou land onder ons vlerke, wat my voete reeds betree het. Daar het ek agter 'n bos gesit. Daar het ek stukkies van my self aan 'n boom opgehang, en ander stukkies in 'n vinnige waterstroom afgespoel totdat die snyplekke wit geword het. (There is now land beneath our wings, land which my feet have already trodden. There I sat behind a bush. There I hung pieces of myself on a tree, and other pieces I rinsed off in a fast-running stream until the cut ends were white.)”

Then the plane landed and all the chaos and emotion of the arrivals hall ensued, with people cousins, parents, children, his mother with her specs full of tears, his father, and Breytenbach wrote another version of this poem to express his feelings about coming home. This time the poem is called Die Hand vol piep (a handful of pain/softness/pampering).

The handful of softness

I would never come home again,

not on the iron cow in the evening twilight through lotus ponds and fires,

nor via embassies past gate guards with blacklists

peering over braziers of glowing coals

in the night of stop and who goes there -

out of the blue

and there comes ma

white with age but with cheeks still peachy red

and dad stands on the other side of the tears

four-square in his pleasure

and even an extra brother with beer and beard -

as large as life

in the catchment area of the airport,

ma knows – where the breath is -

somewhat rumpled from the long journey

flower and lungs just together in the jacket,

new Italian shoes for the occasion,

my head full of tongue and my heart all crust -

But mummy knows of course it's me

and behind me my bird of paradise,

almost the feather in my cap,

as becomes a refugee from overseas,

my wife and my love -

my musicians the gun-bearers and so on

will surely come with a later poem -

the mountain wears a dress shirt,

the clouds bleach and flap juice in the air

every palm tree has a fluttering jowl -

like a klopse** troupe at New Year's and tonight we'll make a fire on the table:

I hang my heart in the wind in the front door's

and lift up my song and my being and my wife:

all those worthless rotten years

were a sad waltz that lasted too long!

* Howzit? - a contraction of “how is it?” actually meaning “How are you?” Usually used in a slightly mocking way.

**Klopse – the name used for the “clubs” that perform during the annual New Year carnival in Cape Town. Traditionally these troupes of performers in their gaily-coloured uniforms go around from house-to-house during the period from Christmas to New Year, collecting money to fund their activities during the carnival. The reference to the “Coloured Choir” in “Die Hand Vol Vere” is also to this cultural phenomenon.

so vierkant in sy skik

so groot soos my lewe

en agter my my wondervoël,

my vrou en my liefde -

en lig my lied en my hier en my vrou:

“After all, we are all bloody brothers and sisters.” - from “A Note for Azania” written by Breytenbach in 1975.

Breytenbach's “season in paradise” in 1973 was a time of great happiness for him and Yolande as they travelled around South Africa revisiting many places that were of great meaning to Breytenbach. (Interestingly, my copy of Kouevuur, Buren-Uitgewers, 1969, from which the poem “Die Hand Vol Vere” comes, was signed by Breytenbach in Johannesburg on 2 March 1973, i.e. during this visit).

His next visit to South Africa was a disaster.

During 1974/5 he and a group of fellow white South African anti-apartheid exiles in Europe started an organisation called “Okhela” with the aim of providing “'invisible support' – materially and politically – to the Liberation Movement” (from the “Okhela Manifesto” reprinted in The True Confessions of an Albino Terrorist, Taurus, 1984).

Breytenbach came under a false name to South Africa to reconnoitre and prepare for the anti-government activities the organisation was planning. He was betrayed, possibly by the ANC, and captured by the apartheid security forces, tried and sent to prison. He was released in early December 1982, returned to France and became a French citizen. 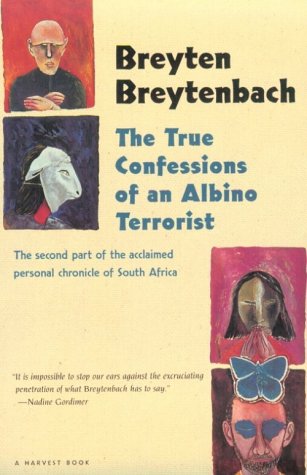 The True Confessions of an Albino Terrorist
Buy Now

Separation and exile are themes that run through South African history, especially in the second half of the 20th Century. That Breytenbach felt the insecurity and pain of separation from his family, the ambivalence of being free in a country other than his own, comes through particularly in the lines: “met jare se opgegaarde rykdom / op rûe van ysterkoeie (with the accumulated riches of years / on the backs of iron cows)”.

These lines are contrasted starkly with the concluding lines of the second version of the poem: “al daardie vrotvreetjare / was 'n the langasem hartseerwals! (all those worthless rotten years / were a sad waltz that lasted too long!)” This feels like a very harsh judgement on a period in which the poet was very creative and did find Yolande, his “Lady One” - “I aimed for the innermost moon / and rent, moved by the syntax and the slow / of sadness and of joy, so / I love you, love you so.” (from “Today I went down” in the collection Lady One, Human and Rousseau, 2002).

Did the iron cow give birth? Or did it, disastrously, fall from the 100-foot pole?