An Illustrated Guide to Steampunk 2 - The Best of 'Proto- Steampunk'

In which you choose to return to Steam

Well met, fellow traveler. I am pleased you came back for more Steampunk shenanigans. We explored the origins of Steampunk as a genre in our previous visitation. We looked the three seminal works that kickstarted the subgenre - KW Jeter's Morlock Night , James P Blaylock's Homunculus and Tim Powers' The Anubis Gates .

We looked at Sterling and Gibson's The Difference Engine that lifted Steampunk right out of the hazy fog of niche subculture into mainstream. The novel was popular and got nominated for a clutch of awards.

In this installment lets look at the past of Steampunk fiction. Lets familiarize ourselves with those sensational scriveners who were the purveyors of Steampunk long before the genre was a twinkle in the eyes of the three amigos who birthed the genre, Jeter, Blaylock and Powers. In these science fiction tales, the musings may be anthropological, philosophical, scientific, psycho social, metaphysical, theological and many more, these authors never lose sight of spinning a ripping yarn.

A galloping good story is what holds everything together and you will not be disappointed.

In which we tease out the themes...

Fellow reader, we all love stories. The recent years has been unkind to good stories by categorizing them into genre fiction. There are a lot of good tales that have been segregated by the tyranny of the genre classification.

So if you've never happened to read science fiction and in particular any steampunk stories- you certainly are in for a treat. These precursors blend history and science into a heady cocktail of storytelling.

While the musings may be anthropological, philosophical, scientific, psycho-social, metaphysical, theological and many more, these authors never lose sight of spinning a ripping yarn. A good story is what holds everything together and you will not be disappointed.

We also have to remember the Victorian prototypes that influence these authors- Jules Verne, HG Wells, RL Stevenson, Mary Shelley, Charles Dickens, Edgar Allan Poe, Mark Twain even Jane Austen have all been cited. We all know how enduring these storytellers have been.

So lets proceed to our assemblage of antecedents...

Author Jeff Vandermeer, who has edited several steampunk related anthologies, calls these stories 'proto-steampunk' - a precursor of what is to come.

In which we contemplate some early risers

The subgenre of 'Steampunk' was officially kickstarted in the letter KW Jeter sent to Locus in 1987. However considering how long science fiction has been going, one can imagine other authors have already concocted stories of alternate history, steam driven machinery, Dirigibles and Victoriana.

Lets have a look at some of these writers who predated the birth of a subgenre.

The Godfather of genre fiction, English Writer Michael Moorcock, published a series of novels between 1971- 1981 that have been colelctively called 'Nomad of the Time Streams' trilogy. Moorcock is not interested in the machine techonology per se, but more on 20th century history and the aftermath of the world wars. The dirigibles fleets and on air battles are all present and correct but are merely a device to illustrate the alternate history and his sociopolitical commentary. 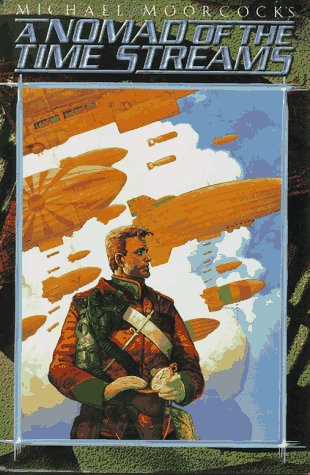 the Nomad of the Time Streams Trilogy

The books , which began with 'The Warlord of Air' ( interestingly Moorcock used to edit the 'Tarzan adventures' magazine when he was only a teenager- one can't help but notice the similarity of the title and some themes to Edgar Rice Burroughs own John Carter series- 'The Warlord of Mars' . Moorcock's hero Bastable also goes to sleep in a cave, is assaulted by a mysterious force and wakes up in a different time and a different world ) were followed by 'The Land Leviathan' in 1974 and 'The Steel Tsar' in 1981 featuring the same character in different time frames. The books were collected together in an omnibus edition called ' The Nomad of the Time Streams'.

This book is the story of a British Soldier called Oswald Bastable out in the north east frontier of India as part of the British Army in 1902. He tells of how he encounters a powerful force that leaves him unconscious in a cave. He wakes up in 1973, to a world which is considerable different from the 1973 when the book was published.

The world wars have never happened and the British Empire continues to rule large parts of the world as do Tsarist Russia, Germany, Italy, Japan and the emerging American Empire. London seems a peaceful and prosperous place to be. He gains work in the Imperial Dirigible air fleet. However Bastable's Utopian experiences soon sours as he is visited by spies, anarchists and the dawning realization that all is not well with the Empires. The absence of wars meant the continued abuse of the colonies and the inhabitants, a colonialism has thrived unchecked.

Oswald Bastable, outraged by the injustice, soon joins the troop of anarchists to incite a revolt. This culminates in an inevitable world war and the subsequent aftershock sends him spinning back to his own time.This is a scintillating autopsy of colonialism, the greed of the empire and the 'what if world war I never happened' speculation all wrapped in a rollicking good tale.

Celebrated English author and illustrator Mervyn Peake is well known for his marvelous trilogy of books called the 'Gormenghast Trilogy' . These books are usually classified as medieval fantasy but do have surreal overtones and a sense of adventure worthy of Robert Louis Stevenson.

The books follow the adventures of Titus Groan, a resident in remote Gormenghast Castle. The setting is filled with strange and macabre characters who are trapped in the castle, tending to the needs of the Groan family. Titus is only a baby in the first novel. Mervyn Peake had planned to write several books following the life and adventures of Titus - however when he was working on the third novel, Titus alone, he was plagued with deteriorating health from Parkinson's disease and met an untimely death at the age of only 57. Peake's feverish imagination and his capacity to elevate the surreal to suspenseful, make this a wonderful trilogy. It is this third novel where Titus leaves the medieval setting and encounters a modern city down the river, that has Steampunk overtones.

Titus, whose erstwhile life was trapped in a medieval castle with Victorian sensibilities is brought into a futuristic world of science and industry.

He leaves the castle Gormenghast at the end of the second book and travels through a desert and eventually a river that brings him to a modern city full of skyscrapers, helicopters, faceless policemen and an Under-river a seething underground city of beggars, outcasts and the homeless.

He meets characters such as Muzzlehatch, a jealous zookeeper, and lusts after Cheeta , the beautiful daughter of a Mad scientist who communicates to his workers through a giant TV screen and keeps secrets.

Lured into the factory by Cheeta, who attempts to seduce Titus by showing him the marvelous inventions of her father, all manner of trouble ensues when the jealous zookeeper sets to destroy the factory.

Laumer served in the United States Airforce prior to becoming an author and is no stranger to military technology and foreign service. His combined experiences helped him shape vast planetary space operas with a tongue in cheek satirical outlook.

It is a series of novels he wrote between 1962 and 1968 ( he wrote another belated sequel in 1990) that are loosely called the 'Imperium' novels that we must draw our attention to. For these have steampunk sensibilities running all the way through them.

It offers once again a vision of a parallel world, where various parallel worlds exist and where, that old chestnut, the British Empire, controls inter-world travel. The Worlds of Imperium

The First book of this series features American Diplomat Brion Bayard. During a visit to Sweden he gets kidnapped by parallel world agents of the Imperium. The Imperium in this world has been formed by the union of British Empire ( which includes America) and the Austro-hungarian as well as the German empires.

The ruling classes and officials welcome him and he is kept in the dark as to the reason of the abduction. It soon transpires that the Imperium is under threat by a rogue world that is destroying others through militant action. The ruler of this world is another version of Brion himself and the Imperium wants our hero to impersonate this dictator, ( It sounds like a science fiction version of The Prisoner of Zenda!)

Using the secret Maxoni-Cocini drive that enables inter-world travel, Brion is soon transported to the world of the supposed villain only to be drawn into a web of conspiracy so deep that no one is who they seem to be.

Combining forces with the unexpected, Brion soon unravels the vast conspiracy that could threaten the existence of our own world and finds time to romance a ' Noble Lady' in between all the intrigue.

This book was followed by three sequels The Other Side of Time (1965), Assignment in Nowhere (1968), and Zone Yellow (1990) all featuring our hero Brion Bayard.

Be there, or you could be transported to a parallel world where hubpages are viewed through a computer with vast glass screens, rotating motors that belch steam ( what else!) and you may have to crank the handle several times to connect to the Aether-net.

The Steampunk Bible: An Illustrated Guide to the World of Imaginary Airships, Corsets and Goggles, Mad Scientists, and Strange Literature
Buy Now

In which we bid Adieu...

They may not be pretentiously post modern. They may even look a bit rusty around the edges. There is no denying, however, that when it comes to blending colonial capers with futuristic ideas, conjuring vast mechanical contraptions and war machines, these books can stand tall in the oevre.

Many now concede that though not directly steam punk, these books signal what was to come.

In the next chapter, we will look at the best of modern Steampunk fiction for your delectation, dear reader. Be there, or you could be transported to a parallel world where hubpages are viewed through a computer with vast glass screens, rotating motors that belch steam ( what else!) and you may have to crank the handle several times to connect to the Aether-net.