World War 1 Poetry: Analysis of Grass and Break of Day in the Trenches

Andrew has a keen interest in all aspects of poetry and writes extensively on the subject. His poems are published online and in print.

These two poems, both unconventional yet highly powerful examples, offer different experiences of the ugliness and horror of World War 1.

In Carl Sandburg's Grass, the speaker is removed from the direct action of warfare, the distant voice crossing the centuries is that of the actual grass. The poem on the page looks almost like a song lyric with a short blunt refrain.

This reflects the fact that Sandburg was a newspaper reporter in the first world war and didn't actually fight. He became well known as a collector of folk songs later on in his writing career.

In contrast Isaac Rosenberg was in the thick of it. He fought and died in the trenches of France, on April 1st 1918 aged 27. A fine artist, his poem is full of vivid imagery, the words revealing his intense personal experience of life at the front line.

The first World War or Great War, lasted from 1914 to 1918. In that time an estimated 8.5 million soldiers were killed, an appalling number. Here are some of the names of the poets who died in action: 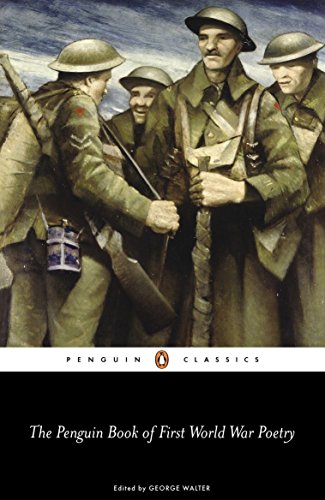 'I am determined that this war, with all its powers for devastation, shall not master my poeting - that is if I am lucky enough to come through it all right.'

Two years later the young poet (and artist) from London succumbed to a German bullet in the Spring offensive but it should be said that the war did not master his poeting - just the opposite. Rosenberg's poetry has mastered the war and given us some of the most memorable lines from that hideous time.

Break of Day in the Trenches was first published in the Chicago magazine Poetry in 1916. Harriet Munroe was the editor. She must have been impressed by the immediacy of the language and the uncertainty of the last few lines.

Carl Sandburg had spent his younger teenage years as a hobo riding the railroads but was a newspaper reporter by the time the war started. In his Collected Poems of 1950 Grass is part of Cornhuskers (1918) which was published two years after his Chicago poems, a volume containing several earlier war poems.

I never forget them day or night:

They beat on my head for memory of them;

They pound on my heart and I cry back to them,

To their homes and women, dreams and games.

Pile the bodies high at Austerlitz and Waterloo.
Shovel them under and let me work--
I am the grass; I cover all.

I am the grass.
Let me work.

You face a direct, almost brutal instruction, to pile the dead men as high as possible, from any battlefield no matter where. These happen to be at Austerlitz and Waterloo. The verbs are manual in action - pile and shovel - practical reminders of the dirty business of war.

This initial order could come from a military voice but the third line reveals that the speaker is in fact grass. Ordinary grass, the green stuff that grows out of soil and yes, covers over the mess, and hides whatever we throw into a grave or a hole.

There's a link here to Walt Whitman's book Leaves of Grass, that groundbreaking body of poems so full of humanity, compassion and love. I think the poet is trying to evoke some of that atmosphere in Grass but he also turns the world upside down through his use of personification. It's the grass that speaks, directing things.

The opening demands of the first three lines continue. Three more battlefields are mentioned - one in the USA, two in the Great War, - the repeated dictum reinforces the mundane process of mass burial and the power of the grass to smother everything.

The language is terse, the message simple. Just do as I say and leave the rest to me.

Time is introduced into the poem. You're thrust into a future where normality has returned,perhaps in two years time, in ten? There are people on a bus or train. Will they recognise the landscape, will they recollect the mass graves in these killing fields? Or will they have forgotten that a war ever took place because the grass now covers all, and peace has returned?

The final two lines remind the reader that Nature will have the last word. Death comes to everyone. We'll turn to dust then return to the earth as a compost from which springs each blade of fresh green grass.

It's the way in which we die that matters - in war or in peace?

With its unusual form and universal theme I think this poem could be made into a song.

Break of Day in the Trenches

The darkness crumbles away.
It is the same old druid Time as ever,
Only a live thing leaps my hand,
A queer sardonic rat,
As I pull the parapet's poppy
To stick behind my ear.
Droll rat, they would shoot you if they knew
Your cosmopolitan sympathies,
Now you have touched this English hand
You will do the same to a German
Soon, no doubt, if it be your pleasure
To cross the sleeping green between.
It seems you inwardly grin as you pass
Strong eyes, fine limbs, haughty athletes,
Less chanced than you for life,
Bonds to the whims of murder,
Sprawled in the bowels of the earth,
The torn fields of France.
What do you see in our eyes
At the shrieking iron and flame
Hurled through still heavens?
What quaver -what heart aghast?
Poppies whose roots are in men's veins
Drop, and are ever dropping;
But mine in my ear is safe,
Just a little white with the dust.

Note the use of the word crumbles in the opening line, giving a sense of things fragmenting. It also contains 'rumbles', an echo of distant booming guns perhaps or a storm. The day may be a new one but the speaker only concentrates on the past, Time being druid - an unusual suggestion - harking back to a pagan era when life and landscape was primitive.

The speaker casts an eye over the dawn from the dug out trench and begins a quiet reflective inner monologue. This could be the opening of a pastoral poem.

The personal attention to detail becomes evident as the speaker (the poet?) observes a rat near his hand as he pulls up a red poppy to stick behind his ear. What an odd image. A dreamy soldier, a rat with a grin and a flower, the symbol of life. Or rather, life lost.

The sketch is slowly coming to life, just like the dawn. Yet the speaker also gives us some food for thought at this early stage. Why decorate oneself with a poppy? How come the rat appears sardonic?

Now the rat is a source of amusement. The speaker, showing signs of mild madness, speaks to the creature and suggests that it had better watch its step. If it crosses over into enemy territory - to the German side - it risks being shot and killed.

This is controversial thinking. Deserters, mutineers and spies were executed by firing squad in the first World War. Is the poet suggesting that these types were no better than rats? As you read on the answer seems to be no. This rat is just a rat trying to survive, looking for a meal.

In choosing the lowly rat the poet asks us to accept that in war a desperate soldier will cling to any form of life to try to make sense of violence and conflict.

The poet focuses again on the rat, which becomes a more sinister force as the speaker describes the healthy, fine young men who have given their lives, with the grimly grinning rat. In these lines the poet uses assonance to full effect - haughty/spawled/torn....inwardly grin/lfine limbs/whims. Enjambment adds to the idea of the verminous creature moving over the bodies of those sprawled in the torn fields of France.

In a similar manner to Donne, who used a flea to help work out his relationship issues (The Flea), Rosenberg latches onto the rat, using it as a vehicle to raise questions about the human involvement in war.

Note the controversial use of 'murder' in line 17, perhaps the oddest line in the poem.

There's an element of desperation in lines 20-23. Men are being blown to pieces and shot down and the speaker asks the rat if it sees anything in the eyes of those fighting and dying. It would probably answer - pure fear, hatred, sadness?

The poet uses the word 'heavens' perhaps in relation to christianity and religion in general but shrapnel and bullets pay no heed to faith.

The final four lines are perhaps the most poignant but they also give the poem a slightly surreal edge. Is the speaker self delusional if he thinks he'll be safe with that particular poppy in his ear; does he see it as a good luck charm? The white dust is settling from a recent bomb blast which killed his soldier friends and brought the scurrying rat out from its hole.

Poppies are beautiful flowers, red like blood, but symbolise the frailty of existence. One day they're standing upright, complete, full flowered and content, the next they're losing petals in a strong breeze and bowing their heads in a defeated droopy fashion.

The poem vividly brings to life the eerily quiet trench. All 27 lines add to the picture of a lone soldier, poppy behind ear, watching the movements of a rat, both perhaps experiencing their final day on earth.

Siegried Sassoon and poets of the Great War

Copyright chef-de-jour@Hubpages. This article should only appear in this format. If you see it on any other site or are suspicious of plagiarism please inform the author if possible.