Bad Girl Comics of the 90's

Young men have an insatiable appetite for beautiful women. In the early 1990s comic book publishers began to cash in on this fact by pumping out a constant stream of titles featuring scantily clad heroines with rather large assets. Most of the writing left much to be desired but the eye candy was splendid. I'm going to take a look back at some of the ladies that defined this genre.

Created by writer Brian Pulido and Steven Hughes, she was originally a supporting characted in the Evil Ernie mini-series. It did not take them long to realize they had a cash-cow on their hands and quickly began pumping out an endless series of one shots, miniseries, and crossovers featuring her. Their biggest contribution were several innovative premium covers including a leather cover swimsuit issue.

Being intent on killing everyone on earth you couldn't exactly call her a hero but she did perhaps have the largest bosom of all the bad girls.

Joseph Michael Linsner created this character who first appeared in the Cry For Dawn Anthology. Dawn was a goddes and that was eloquently depicted with Linsner's beautiful artwork. She is easily identified by the three tears running from her left eye. Fans of Linsner's artwork were rewarded by at least one, sometimes several, alternate art covers of each book she appeared in.

The longest established bad girl on the list. Vampirella originally appeared in the self-named magazine from Warren Publishing during the 1970s. In order to cash in on the bad girl craze Harris brought her back this time in the traditional comic book format.

Sarah Pezzini was the first bearer of the Witchblade, introduced to us by Top Cow Comics in 1995. Drawn by the very talented artist Michael Turner, who is no longer with us, but is fondly remembered. Witchblade has spawned a television series, anime, manga, and rumored to become featured in a motion picture.

Crusade Comics William Tucci brought us this Japanese -American heroin. Deeply influenced by Japanese history and mythology, Shi was entangled in an inlvolved in a war that dated back to ancient Japan.. Her first appearance can be found in Razor Annual #1, another title that made this list.

J. Scott Campbell brought us not one girl to drool over, but a whole team of scantily clad James Bon-esque adventure girls. A Danger Girl video game was released for the Playstation in 2000.

At the forefront of the bad girl wave, London Night Studio's introduced Razor in 1991. Produced by a small independent publisher production values varied greatly until she became a major player after the trend of bad girls really started to grow. Unfortunately as the comic shrunk following the bubble, London Night Studios became another victim of the implosion.

Randy Queen introduced Ariel Chylde to us. We watch her fight her worst nightmares come to life while wearing her bed time clothes.

An almost forgettable book from Dark Horse Publishing if it was not for the horrible movie adapted from it. This was supposed to be the movie to establish Pamela Anderson as an A list star. Instead it was a box office failure. Perhaps her most memorable role after her direct to dvd classic co-starring her ex-husband Tommy Lee. 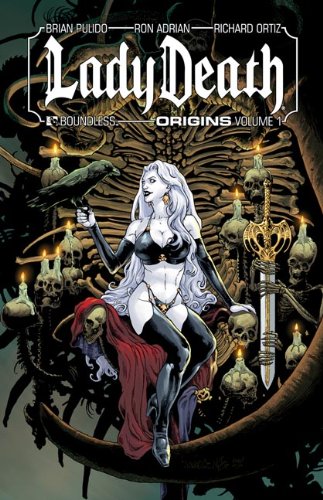