Baltic Sea Anomaly Details: Is it a UFO or Hoax [video]

GA Anderson is a freelance writer for private and commercial publishing platforms.

See unreleased Baltic Sea anomaly sonar pictures and video. If the submerged object, (USO), is a hoax, why did the government classify all of the researcher's data? A real unidentified submerged object is found and the pictures show a major operations base.

Is the Baltic Sea "UFO" a hoax, or did they find a real Millennium Falcon? "Is it a UFO, USO, or something else?"

UFO believers are serious, but non-believers are snickering, and a story that first broke in August of 2011 has resurfaced with new details. The major media outlets ran the story as a tongue-in-cheek jab at UFO believers, snidely commenting that a Baltic Sea underwater research vessel has found the real "Millennium Falcon," but no one is mentioning that the Swedish government declared they had maritime authority of the site and seized the researcher's computers and all records of the incident.

So is it really a hoax, an underwater anomaly, or a multinational conspiracy to suppress facts that may indicate an extraterrestrial event?1

In July of 2011 underwater research specialist Peter Lindberg, of the research vessel Ocean Explorer, was returning to port from a month long search for Baltic Sea shipwrecks. Following a typical return-to-port practice, they were towing an underwater sonar sled, using side-scanning sonar, to map the sea floor as they returned. But 187 miles off the coast of Sweden the trip became anything but typical.

The image on the sonar display screen seemed too well defined to be a natural seabed formation, and its obvious similarity to a disk-type craft too much to ignore. Lindberg quickly called the rest of the research staff down and directed the ship to begin making more lateral passes over the object. The above photo is the image he first saw on the monitor.

After the initial excitement, the research team began to compile and evaluate the details of what appeared to be a non-natural seabed find. It was the sharp edge delineations of the image that strongly indicated the object was not a natural rock or sea-floor formation.

The object is in almost 300 feet of water, and is approximately 195-200 feet in diameter. There is also what appears to be a 1600 foot "skid-path" behind it. Because of the nature of side-scan sonar, in loose sea-floor silt like in the Baltic Sea, it can sometimes return images that are actually embedded, rather than sitting on the surface. Efforts to determine the height of the object were non-conclusive. According to Lindberg it could be 10 feet tall, or 50, and it was also not possible to determine how much of the object could be embedded below the surface.

The similarity of its shape to the movie starship was not lost on the crew either. It is believed that it was a crew member comment to a dockside reporter that prompted the public comparison. It is also believed that leaked details of ship-to-shore radio communications advising the expedition's sponsors of the find, and the reason for their delay to port, were responsible both for the crush of reporters, and the government officials that awaited the Ocean Explorer when it pulled into port. 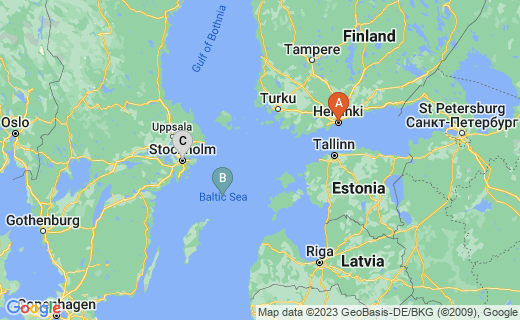 It is not unusual for research expeditions such as this one to pledge crew members and research staff to confidentiality agreements, but it is unusual for port authorities to quarantine an arrival as they did this one. Officials boarded the ship, even as the mooring lines were being set, and it was almost 4 hours before Peter Lindberg appeared and gave an impromptu press appearance at the foot of the ship's gangway.

According to Lindberg, due to the unexpectedness of the discovery, and the limited amount of resources available at the time, he would only be able to give the basics of their information. Further study of the sonar data, and possibly even another expedition, would be needed before there could be any conclusive answers as to what the object was.

He then referred all further inquiries to the expedition sponsor, Baltic Finland LC, an investor partnership.

*Note: In a later email to ABC News, Lindberg stated that further study of the image had narrowed the list of possibilities, but it would still take more investigation, possibly using an unmanned underwater sub, before anyone could even make an educated guess as to the identity of the object.

The Non-official Story of the Baltic Sea UFO

In what appears to be a "Wikileaks Redoux" event, the Danish website, Nosecrets.org, has posted interview transcripts, images, and emails that it says prove the Ocean Explorer's find was much more than what the public has been told, and that there was a multinational government effort to keep the real information secret.

The released documents, (supposedly from thumb-drive data a research member concealed from Swedish officials), detail an obvious and concerted effort to suppress the data from public release, but it is the additional sonar images that are most damning. Not only do they show there is much more to the finding site than has been told, but they also show that the publicly released image was only a cropped portion of the real sonar data.

What They Did Not Want You To See

According to Leigh Dostra, an imaging data analyst in Lindberg's research group, the original sonar scans actually showed three distinct objects, not just the cropped image that was released. She also stated that it was the Swedish officials that determined which part of the image to release to the public.

The research group determined that images a. and c. were two broken pieces of one object. Indicating the original shape would have been saucer-like, not the "Millennium Falcon" shape that the media has ridiculed. Computer-matching of the two pieces show they could fit together, and their combined area would be almost 325 feet in diameter. They also determined that the "skid-path" was approximately 600 feet, not the 1600 feet original mentioned to the media.

The longer and larger image b., is the most mysterious part. It appears to be approximately 920 feet long, and 205 feet wide. And hollow.

According to Dostra, the Ocean Explorer was equipped with several other types of imaging equipment. The above image is from an acoustical scan taken from above. The density results show the object to possibly be honey-combed with compartments and passageways.

The large circular center portion may to be one large open area, while the "wings" on each side appear to be compartmentalized with darker "veins" that could be passageways. Dostra cautioned that this is only speculation at this point. Better equipment, and closer scans are needed before any interior details could be confirmed. She did comment that the uniformity of the segment's "grayness" indicated open volume, not solid material.

The top image is the result of the side-scan sonar data, although much of the edging seems very distinct, Dostra cautioned that sea-bottom silt refraction could be responsible for the apparent delineations.

The middle image is a combined thermal and acoustic density image. The red colorations were explained to be caused by oxygen output of seabed vegetation, and the lighter blue/teal colors represented non-living organics. It is the darkest black and gray lines that were most interesting. Dostra explained that these represented verticals, and in this image, the verticals were much too uniform to be natural formations, they almost certainly had to be man-made, or perhaps, alien-made.

The bottom image is an artistic rendering created from the therm/density image by an animation studio based in Finland. Understanding that it is a speculative rendering, it is still based on real data points that are just rendered in a different format. Similar to the way current animation software uses real-time motion data points to simulate human body movements.

The top image is the result of the side-scan sonar data, although much of the edging seems very distinct, Dostra cautioned that sea-bottom silt refraction could be responsible for the apparent delineations.

The above image is a combined thermal and acoustic density image. The red colorations were explained to be caused by oxygen output of seabed vegetation, and the lighter blue/teal colors represented non-living organics. It is the darkest black and gray lines that were most interesting. Dostra explained that these represented verticals, and in this image, the verticals were much too uniform to be natural formations, they almost certainly had to be man-made, or perhaps, alien-made.

Artistic Rendering of the Thermal/Density Image

This last image, (above), is an artistic rendering created from the thermal/density image by an animation studio based in Finland. Understanding that it is a speculative rendering, it is still based on real data points that are just rendered in a different format. Similar to the way current animation software uses real-time motion data points to simulate human body movements.

Do you believe in UFO's?

Is it a natural formation - misinterpreted by the sonar readings, or a real UFO? There is enough of both ambiguity and detail to form an opinion either way, it just depends on how you interpret the data, but what is clear is that the government quickly jumped in and quashed a full release of all the data. The real question is why?

Author's note: two days after Nosecrets.org posted this data, the site went dark. The site owners said they were hacked, and their servers wiped clean, but so far they have been unable to trace the source of the hack. They have also been unable to recover any of their server data - or locate the original thumb-drive that was stored in an office safe. - GAA