Before the Phantom – Literary Influences on Leroux’s Novel

Before French author Gaston Leroux (1868-1927) wrote his masterwork Le Fantôme de l'Opéra, he worked as a journalist for several Paris newspapers. During the early 1900s he was asked to be present when the cellars of the Palais Garnier opera house were explored for probably the first time since the Paris Commune 30 years before. What Leroux found there served as inspiration for his future novel: He found prison cells, an underground lake, and, supposedly, even the skeleton of a man wearing a wedding ring. Despite its great romantic touch, all my research on The Phantom of the Opera has unfortunately found nothing legitimate regarding the skeleton story. The description of the underground of the opera house, however, is quite accurate.

I don’t know how much Leroux actually wrote in his newspaper about the experience. But I do know he incorporated pretty much all of his findings, both real and imagined, into his 1910 novel The Phantom of the Opera. A certain amount of truth served as inspiration for the Phantom. But Leroux was also influenced by several novels and stories that would have been popular during his time:

In 1894 George du Maurier, grandfather of world renown 20th century novelist Daphne du Maurier, published a literary sensation about a tone deaf artists’ model who, after being hypnotized by the evil genius Svengali, becomes an opera singer with a stunning voice. Her name was Trilby and, for those of you who are wondering, Yes! the hat was named after her. The novel was later adapted for the stage and in one production the leading lady wore a little hat which became immensely popular.

Gaston Leroux took the idea of a woman singing better when under the influence of someone with a superior knowledge of music and used it in his own novel. Also, Du Maurier’s character Little Billee, Trilby’s main love interest, is quite similar to Raoul in that both are so young, naïve, and to a certain extent useless!

From Chapter 9 of The Phantom

It was a man dressed all in scarlet, with a huge hat and feathers on the top of a wonderful death’s head. From his shoulders hung an immense red-velvet cloak, which trailed along the floor like a king’s train; and on this cloak was embroidered, in gold letters, which everyone read and repeated aloud, “Don’t touch me! I am Red Death stalking abroad!” – Public domain translation by Alexander Teixeira de Mattos

The Masque of the Red Death by Edgar Allan Poe

During the 1840s Charles Baudelaire (of Les Fleurs du mal fame) translated into French most of the works of Edgar Allan Poe. Baudelaire’s work is still praised as one of the finest examples of translation in the world. Leroux undoubtedly read his – or at least someone’s – translation of Poe before writing the masked ball scene in The Phantom of the Opera.

In Chapter 9, At the Masked Ball, Erik dresses as the Red Death and comes to the masquerade at the opera house, stalking Christine. Aside from the costume similarities, both stories at this point have a central theme of a dreaded person coming to a ball and invading what someone thought would be private and safe.

The figure was tall and gaunt, and shrouded from head to foot in the habiliments of the grave. The mask which concealed the visage was made so nearly to resemble the countenance of a stiffened corpse that the closest scrutiny must have had difficulty in detecting the cheat…the mummer had gone so far as to assume the type of the Red Death. – Edgar Allan Poe’s The Masque of the Red Death - it is almost uncanny the similarity between this and what Leroux wrote!

Admittedly, I have found nothing which directly states that The Phantom of the Opera was influenced by George Sand’s novel. However, as I started reading Consuelo (first published in 1842), I noticed several things which make it pretty obvious that Gaston Leroux must have read the novel at some point himself.

In many ways Consuelo is sort of a Christine Daaé character: she is from peasant stock and has an almost unbelievable talent for music. She is recently orphaned, but soon gains success when she stuns everybody with her opera voice. Her career on the stage is short-lived, however, due to romantic entanglements and a temperamental, untalented diva named Corilla.

After Consuelo leaves the stage, she becomes the idol of Count Albert de Rudolstadt, a slightly deranged and enigmatic nobleman who is entranced by her voice. At first, Consuelo is moved more by pity than by love for the count, and when he suddenly disappears, she follows his trail through a subterranean passageway, led in part by his violin playing.

Does any of this sound familiar?

The Man Who Laughs
Buy Now

While we are on the subject of indirect influences on The Phantom of the Opera, it should be noted that a severe physical deformity which wrecks the life of the chief male character is a theme is French literature which started nearly 100 years before Leroux’s novel.

A male character who is usually a magnificent and sensitive human being, but who has a severe or grotesque handicap was a common creation of France’s literary hero: Victor Hugo. Obviously, the most famous example is Quasimodo, the heroic, tragic, and loving hunchback of Notre Dame. Hugo created a character similar to Quasimodo in the form of Gwynplaine, the hero of The Man Who Laughs. This deformity was caused by a sadistic surgeon who created a permanent smile (which served as inspiration for the Joker’s appearance) on Gwynplaine’s face as a way to punish the boy’s father for making a wrong political move.

Hugo further used this theme in his play Le roi s’amuse, the basis for Verdi’s opera Rigoletto. His main character, Triboulet, is another hunchback; but in this case, he is not sympathetic. Instead, he is a conniving sociopath who does nothing but plot revenge and murder – and in this way does very much resemble Erik the Phantom.

Yet another French work which follows the male deformity theme is Edmond Rostand’s 1897 play Cyrano de Bergerac. In this case, the character is a poetic genius, but once again is hindered in other aspects of his life by his physical appearance.

Cyrano de Bergerac was immensely popular after its premiere and there is little doubt that Gaston Leroux must have seen it. In fact, it is very likely he saw the first performance, as he was working in part as a drama critic during the 1890s. 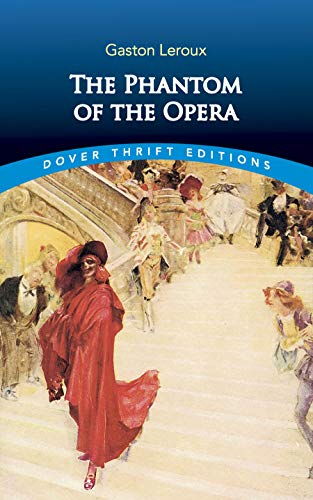 The Phantom of the Opera (Dover Thrift Editions)
Buy Now