Lost in the Bermuda Triangle HubNuggets

It's been one of those weeks - well, several of those weeks. First, ladyjane1 was kidnapped by her evil twin-sister, Lady GaGa. Then, in short order, the team renovated the clubhouse, cleaned up after the mother-of-all reno parties, solved the mystery of the fabulous noir radio show, dashed to Boston for a Colonial Tea, and flew off in all directions to rescue ladyjane1 with the help of Simone and that week's HubNuggets nominees. Just another busy few weeks in the life of the HubNuggets Team.

Then, after an all-expenses-paid flight to Bermuda, courtesy of a temporarily-redirected Lady GaGa, the team held a marvelous potluck bake sale to raise money for our favorite charities. So far, so good. Another exciting adventure for the HubNuggets Team - problems solved; HubNuggets delivered; all's well that ends well.

Yet here we are over the Bermuda Triangle, radio dead, navigation off-line, our plane plummeting out of control towards raging seas worthy of George Clooney's movie "A Perfect Storm!" 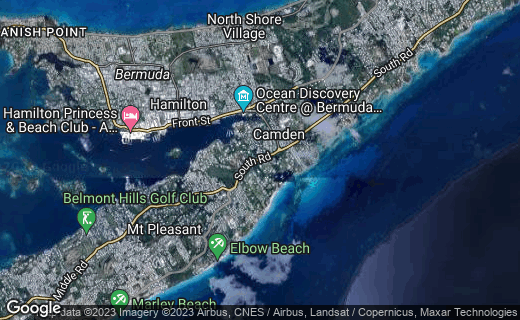 Trapped in the Bermuda Triangle

Maddie Ruud pushed open the cockpit door, bracing herself against the wild pitching of the plane. Behind her, Simone Smith and Jason Menayan fought to keep their little craft level, while the needles on every gauge on the console spun wildly. Jagged lightning bolts flared in the billowing darkness beyond the windscreen.

Patty Inglish, MS closed up the back of the radio. "Let's see." She tapped the "Send" key, and was rewarded with a burst of static.

"Is it working?" asked Maddie, unable to completely disguise the slight tremor in her voice.

"Not properly, but I might be able to get someone's attention by sending an S.O.S. using static," replied the intrepid adventurer. "That is, if there's anyone out there to hear us," she added.

The plane gave another lurch. Maddie shivered. "I'll go see if the kitties have finished with our first batch of HubNuggets." Summoning her best attempt at a cheery smile, she headed for the passenger cabin.

Which one of this week's Sports and Recreation nominees is your favorite?

72 people have voted in this poll.

"The first documented encounter in the Bermuda Triangle was by Christopher Columbus who encountered mysterious lights and compass malfunctions on his first voyage through the area."

The Sports and Recreation Nominees

Faces pressed against the windows, Enelle Lamb and RedElf stared into the darkness, HubNuggets hubs scattered, unnoticed, across the seat. "Did you see those planes?" asked Enelle.

"Five of them," RedElf said. "Old Naval bombers - 1945 Avengers. They passed so close I could see the names stenciled on their helmets."

Maddie and the kitties stared at the radio, eyes wide. Patty glanced at the frightened trio, then cleared her throat and resolutely began sending her Morse Code static distress signal again.

"I'd better check on ladyjane1 and KoffeeKlatch Gals," said Maddie. "They're in the back galley, making nice hot cocoa for everyone. I'll take these for them to read and vote on." she said, gathering up the nominees' hubs.

Which one of this week's Fashion and Beauty nominees is your favorite?

28 people have voted in this poll.

"The name “The Bermuda Triangle” was placed in the cultural lexicon by a May 1964 Argosy magazine article by Vincent Gaddis."

The Fashion and Beauty Nominees

Crash landing in the Bermuda Triangle

ladyjane1 and KoffeeKlatch Gals weren't in the aft galley. Maddie found them in the baggage hold with ripplemaker, tying together huge, netted bundles of recycled plastic bottles.

"Just in time, Maddie," said ripplemaker. "You can help us make sure all the bottles are tightly capped."

"I'm so glad we offered to take all these bottles back to the recycling plant in Florida," said ladyjane1. "Gal suggested we deploy them under the wings as flotation devices if we have to ditch in the water."

"Do we have time to read and vote first?" asked Gal.

ripplemaker let out a squeak as the plane gave another violent lurch, then steadied herself, pointing a shaking finger at the window. "What is that?" she quavered.

Tossing on the mountainous seas far below, barely visible in the flaring, intermittent lightning, the team could just make out the twin masts of a nineteenth century brigantine.

A jolting shudder sent the plane lurching across the lightning-filled skies, throwing the team to the floor. Motors racing as Jason and Simone fought to restore control, the plane's nose lifted briefly, then plunged towards the raging waters.

Which one of this week's Home nominees is your favorite?

44 people have voted in this poll.

"Neither the Coast Guard nor the Navy officially recognizes any geographically defined area called the Bermuda Triangle; however, it does have an official statement on the topic providing a brief history and likely explanations."

Another mystery for the Triangle?

The morning dawned clear and bright over a tranquil sea, as the Coast Guard Patrol responding to Patty's distress signal hove to beside a strange craft - a little plane, bobbing serenely on the gentle waves, resting on huge net bags full of thousands of empty plastic bottles.

The HubNuggets team hailed the rescue party from their perches atop the floating plane. "Join us for breakfast - we have fresh cocoa and blueberry muffins," ripplemaker called out as the rescue craft came alongside.

"We're glad you're all safe," the Captain said, adding with a grin, "I guess it really pays to recycle."

"True," said Maddie, gazing at the thousands of empties. "I just wish I'd remembered to mark the bottle I put the HubNuggets hubs in for safekeeping."