I found about spoken word few years ago. It didn't take much for me to find out who are the best spoken word artists. I was always in love with poetry and rap so spoken word really made my day. I am not mentioning poetry without a reason because spoken word is all about beautiful lines and remarkable thoughts. The "rap part" is about the rhythm (well, rap is also about beautiful lines and remarkable thoughts but that's another hub). People often say slam poems have nothing in common with rap, but they are wrong. Slam poems are, like rap verses, written for live audience and if they don't have the rhythm, emotion and delivery that good rappers have, the words will lose their power. If the performance is right, it's a lot easier to keep attention on the words. In this hub I will try to summarize the best spoken word artists (slam poets) out there.

I will start from Shane Koyczan. He is the first Canadian who won the Individual US National Poetry Slam. He is often described as a rapping poet so it is easy to conclude that he is really good with rhymes and flow.

His most popular poem is We are more. He performed it at the Opening Ceremony of the 2010 Winter Olympics in Vancouver, but it is hardly his best poem. He is so much creative in his other poems like Move pen, move where he says final goodbye to his mother and just makes you wanting to cry.

Because in the count down to death the question of "why" melts into "when".
How much time do we have left, because if I knew what I know now then...
Move pen move, write me a mountain.
Because headstones are not big enough.

But poem that really leaves audience in tears is The crickets have arthritis, a story about ill boy named Louis who he meets in hospital.

He is not all tears and weeps. If you doubt yourself, or you are afraid of making changes you should listen to his powerful performances Grandma's got it going on (originally Help wanted) or This is my voice. Other must see/listen is a story about a geniousity named Beethoven.

Mike Mcgee is a person full of charisma and talent. Although not popular like Shane Koyczan he is a really good poet. His style is a lot different, usually without rhymes, but with witty quotes and great sense of humor. His poems are usually very funny: Soulfood, If I were, Power of John Travolta or Like.

But when he comes up with seriousity he usually makes you wanting him to speak more and more. In I Mailed Myself A Love Letter Yesterday he says:

I promised myself a long time ago that I would never settle for average or mediocre
and that I would always try to find best and worst within myself
and maybe I'd be able to work the two out so they could learn from each other.

His love poem Open letter to Neil Armstrong (With these empty hands comes a heart that is full more often then the moon) is really nice, so you should check him out. 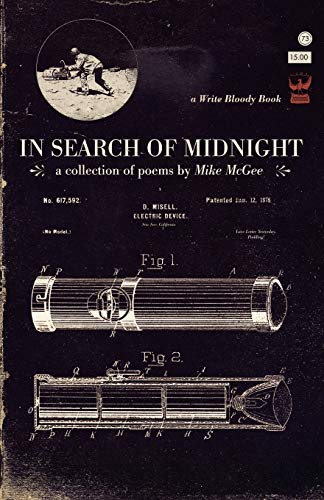 In Search of Midnight: The Mike McGee Handbook of Awesome
Buy Now

Buddy Wakefield is a person who introduced me to spoken word. First slam poem I ever listened was Human the Death Dance and I must say that, in my opinion, it is his best poem to this day. Even though The Information Man is much more popular, at least according to Youtube views, it doesn't have nearly as much energy and quality as Human the Death Dance.

There are still days you can catch me tape recording internal silence and playing it backwards for an empty room. Just so I can listen to his dying wish.

That motive is really powerful. Other poems i should emphasize surely include Guitar Repair Woman, a wonderful mother poem:

This is my mother,
Tresa B. Olsen.
Runner of the tight shift.
Taker of the temperature.
Leaver of the light on.
Lover of the underdog.
Mover of the mountain.
Winner of the good life.
Keeper of the hope chest.
Guitar
Repair
Woman.

And Convenience Stores, a nice on-the-road story where the protagonist meets a female store worker and speaks about her issues, the ending is really great.

And I'm gonna roll outta here one day.
I just might not get to drive.

You should also check Derrick Brown. He has a unique style, he is always performing with background music and often sings. I really loved his poem Meat Loaf:

I always asked my mother why diamond meant that you love someone.
Why don't give 'em a brick, or snail, or a wombat, or cat's brain to show them you are crazy about 'em.
Or trophy full of zombie lipstick to prove that you'll kiss their brains out forever.
Made more sense.

Andrea Gibson should also be in your playlist. I fell in love with her poems when I heard her touching story named Crab Apple Pirates, so if you want to give her a listen, I recommend you start from there.

Taylor Mali is the most popular artist in this hub. I would not agree that he is the best one, but he has good poems. His most popular poem is, in my opinion, also his best one. What teachers make is truly great with a lot of strength in it.

Saul Williams, Anis Mojgani and other great slam poets are out there making art daily so if you like what you hear start digging new artist and enjoy the beauty of their art.

Feel free to comment on this hub, any questions and remarks are accepted.

Who is your favourite slam poet?