Book Review: A Clue in the Stew by Connie Archer

I was glad that my time in Snowflake, Vermont was coming to an end with the conclusion of this series. After binge reading, I was getting a little tired of Lucky Jamieson and her amateur sleuthing, but in a way, I kind of miss her.

In this last installment, bestselling author Hilary Stone is coming to Snowflake for a book signing and she's also looking for a place to stay since she wants to write her next book in Snowflake.

By the Soup regular, Hank Northcross has stopped coming into the eatery when he finds out that Hilary will be in town and he doesn't want his friends to know that he hates the woman. But, he does become a suspect in her murder when he's spotted leaving the B&B that she and her entourage are staying at. Plus, he's skipped town.

While Lucky and his best friend, Barry Sanders, start to put pieces of Hank's past together, she also has to contend with a waitress that she's hired to replace Janie, who's now off at college, but Nannette Simms really knows how to mess up the morale at By the Spoon.

She blows into town with no identification and makes Lucky's life a living hell as she begins to woo Jack and flirts with all of the male diners. Lucky knows the woman is trash and the two have plenty of fights during the day and no matter how she tries, she can't get rid of her or her growing fondness of Jack.

Everyone can see through Nannette's game but try as they might can't get rid of her and while Lucky's trying as hard as she can, she's also trying to figure out how to get Hank to come back to town and prove his innocence.

The series does end on a good note and in these days of reboots, maybe Archer will take a trip back to Snowflake and revive the series. It would be good to see what the characters have been up to. 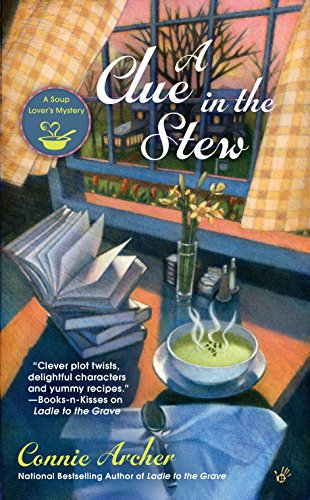 A Clue in the Stew (A Soup Lover's Mystery)
Buy Now