Chances are if you’re a numbers person you might like this book trying to figure out the murderers code. If numbers don’t excite you, then you might want to skip this series altogether.

Not your typical crimozy, former police chief Zach Stone is now an independent consultant and when he is asked back to Charlotte to look into two murders, he brings along his wife Savannah. The two are concerned because their friend (and mayor) Grady Winslow is the main suspect in the murders.

Savannah isn’t too happy that Zach is taking the case since he was previously injured on the job two years earlier. Up to this point, his consulting business hasn’t brought in a lot of work and she is afraid that he won’t be paid for his services.

He convinces her to come with him and she is surprised when she checks into the hotel. They are given a suite and find out that they are guests of the owner, Barton Lane.

While the police are receiving threatening letters, Savannah notices a numerical code and she concentrated on it since she makes number puzzles for various newspapers.

She wants to know everything that is going on, but he doesn’t share too much information with her (only until she comes up with some type of theory) so she spends time catching up with old friends and family. For most of the time, she complains about trying to find time to make her puzzles.

My interest in the book was probably lost around the fifth page.

It wasn’t due to the characters, but the use of “my husband” and “our suite.” At least every other paragraph uses the phrase. We know this is a married couple, we know they are staying in a hotel suite, so why do we have to keep getting hit over the head with it?

When a phrase is overused as much as these two, chances are you’re going to become obsessed with finding them on every page and forget about the story.

However, if you enjoy numbers, you might be able to follow along with Savannah in trying to figure out who did it. 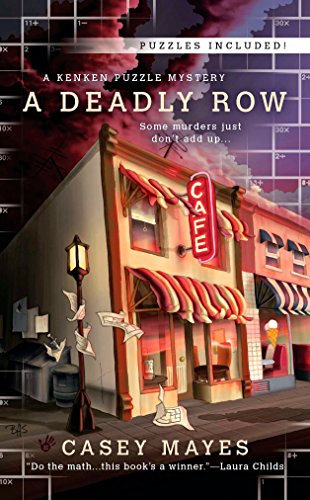 A Deadly Row (A Mystery by the Numbers)
Buy Now