Diving back into a series is always hard especially when its been awhile.

Thankfully, this was an easy dive.

As the end of picking season begins to wind down, Meg Corey has a lot on her plate. Her wedding date is fast approaching and she’s been lollygagging when it comes to important decisions.

After stopping at The Gran to plan out the wedding menu (she’s happy to complete one task) she notices the lights on at the Historical Society and decides to stop in to see her friend Gail Seldon. By stopping she can cross off another item on her “to do list” and ask her if she’d like to be her Matron of Honor.

Upon entering she finds a disoriented Gail covered in blood not knowing who she attacked.

The next day, Meg goes back to the Society to help Gail clean and when she goes into the barn to get cleaning supplies, she stumbles upon a barely alive Aaron Eastman.

Aaron, an ex-con, has just been released from prison after a twenty-five year sentence following the deaths of his parents and grandmother in a fire caused by him.

But was he responsible for the deadly fire?

This is something that Meg and her fiancé Seth Chaplin, along with other members of the community try to figure out since Aaron has no memory of the fire.

The only thing he does remember is that he had helped his grandmother move some boxes to the Society, which when opened lead down a dark path.

This installment really doesn’t read as a murder mystery, but more as someone coming to terms with the past. It’s more melodrama and while the culprit does admit to the crime, a resolution really doesn’t happen.

Still, it’s a good read and with three remaining installments left, I’m sure the series will end on a positive note. 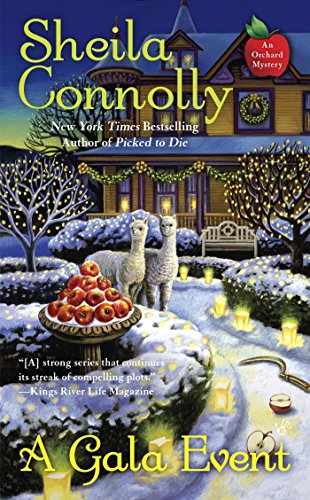