A mystery should be fun to solve, but when you finish the last page and ask yourself, “what did I just read?” you know you’ve wasted time.

Such is the case with selfish couple Zach and Savannah Stone.

In the second installment of this series, Savannah is summoned to her syndicator to discuss her puzzle column. Her plan is to tell Derrick Duncan how she doesn’t like being treated by him and wants some type of corrective behavior from him.

When she gets to the conference room at the hotel that he’s staying at, she finds out that he’s fired two of his other puzzle makers and plans on selling her to another syndicate. Savannah isn’t pleased and like the others before her, storms out.

She calms down by going to a museum and once she has figured everything out, goes back to the hotel to confront him. Her only problem is that once she gets back to the conference room, Derrick’s dead.

Savannah becomes the main suspect in his murder and she calls her friend Jenny (a lawyer) to help her out. She doesn’t want Zach to know since he’s testifying in The Slasher trial.

After he calls her to tell her that The Slasher killed himself, she tells him of her predicament and he rushes to her aid.

Unfortunately, Savannah’s drama is upstaged by Jenny’s own drama when she has to deal with a stalker (which isn’t too hard to figure out).

It seems like most of the time the three are trying to figure out who the stalker is and when they go over the suspects in Derrick’s murder (which Savannah seems to forget that she’s one) they’re hotel hopping or eating.

You may ask yourself why I would continue to read the series and even I asked myself that whenever I turned a page. After completing the first book, I was mildly “invested “ and since this was about thirty pages shorter I had hoped that maybe it would have been better. I was wrong.

For me, nothing could save the book and at one point, all four tires of a vehicle are slashed. It kept changing from Savannah’s car to the rented SUV Zach picked up at the airport. With a flaw like that I’m surprised the proofreader didn’t pick this up.

On the bright side (if there is one) you do get a lot less of “my husband “ in this installment, but you do have to trudge through the rest of the Stone’s sappy love fest and their superiority.

It’s really not a good way to spend a rainy day. 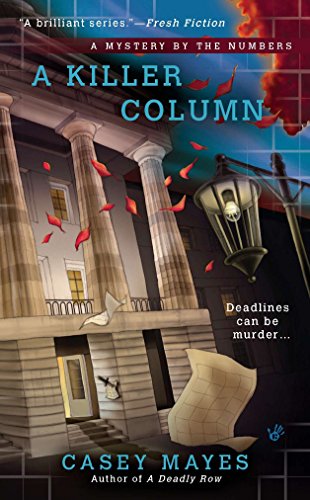 A Killer Column (A Mystery by the Numbers)
Buy Now