Book Review: A Spoonful of Murder by Connie Archer

Sometimes the stars align just right and everything seems to fall into place and if you're looking for a "getaway" in Vermont, then take a trip to Snowflake.

Lucky Jamieson has returned home following the tragic deaths of her parents leaving her everything, but, Lucky's not sure if she wants to keep the family business or her parents house.

After she pays a visit to their gravesite, Lucky walks back and looks at the soup/sandwich shop that her parents owned and gets a warm fuzzy feeling while standing in the cold winter air. From this moment on, she starts to have conflicting feelings of the future.

She knows that if she were to move back to Madison, Wisconsin, she'd be leaving behind her grandfather Jack and while he's old, he wouldn't have anything else to do with his time. She's also concerned for the employees that would eventually lose their jobs.

As she starts to figure out her future, Lucky begins to worry about Jack's mental health and when a tourist's body is found behind the shop, Lucky's chef, Sage, becomes the prime suspect in the murder.

She sets out to find the true murderer and also figure out how to bring in the winter tourists since this should be the busiest time of year for the shop. With the discovery of the body, business has dwindled and the tension between her former best friend Sophie (who's Sage's girlfriend) begins to heat up.

Lucky also has to keep Sage's secret safe and confront the feelings of a long term crush she's had on Dr. Elias Scott when he asks her out. Plus, there's a blizzard coming and she has to deal with the residents of Snowflake, who make a daily pilgrimage to the shop.

Archer knocks the first installment out of the park with great characters and a nice small town setting in the mountains. It'll give you a warm and cozy feeling following the holiday season when everything is cold and gray.

Since this is a food mystery, there's some soup recipes following the story, which should definitely warm you up! 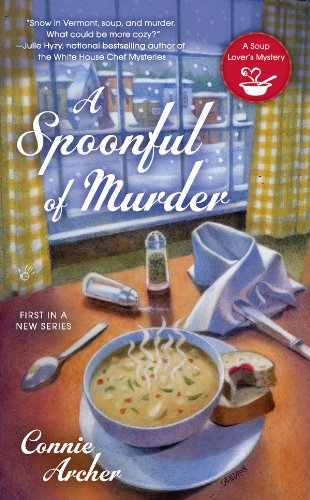