Book Review: Buried in a Book by Lucy Arlington

If you're reading this, please remind me never to read during the holidays or putting your house up for sale, and then do a review. It can be a dangerous combination.

Anyway, the first book in the Novel Ideas mysteries has started off to a great start and I can only hope that the momentum continues.

From the very beginning, Lila Watkins, a forty something feature writer at the Dunston Herald for the last twenty is let go due to "budget cuts." In a panic, she takes a look at the classified section of the paper and sees an ad for an intern at the Novel Idea Literary Agency.

With nothing to lose, she calls and has a phone interview where she's promptly hired (wouldn't life be easy if that were to happen in real life?) by the owner, Bentley Burlington-Duke.

The next morning, Lila takes the train to Inspiration Valley and meets with Bentley and the other agents. She's also introduced to Marlette, a homeless writer who comes in daily with flowers and a query letter. That is until she returns from a coffee run and finds him dead in the reception area.

While his death disrupts the office, it's business as usual for the other agents and later that night at home, Lila receives a call from the local police telling her that her son, Trey, has been involved in an accident along with some friends. Although he's not hurt, her car has been totaled, along with the high school's football field, since he and his friends decided to do donuts.

Upset, Lila decides to sell her house and move in with her mother since she doesn't know how she's going to pay for the damages. She also thinks that moving in with her mother (who lives in the valley) will help her save money since Trey is going to be a freshman in college.

After moving in, her mother takes the two up the mountain to a co-op where Lila learns that Marlette had a cabin up there. She takes a look around and finds a notebook then takes it with her since she wants to know more about him.

Trey, on the other hand, develops a crush on Iris, the sister of the co-op's founder and decides that he wants to live there rather than go to college.

Lila isn't too happy about this, but she has other things to worry about since someone left a message on her home's front door about being nosy and to stop looking into the past of people.

Once she discovers the truth about one of the other agents (who ends up murdered as well) she now has two murders that she needs to solve before someone else at the agency ends up six feet under.

From the beginning, the story is pretty much laid out and is somewhat predictable, but along the way, the characters do tell a good story and are enjoyable to get to know. Arlington allows them to grow slowly and gives them enough space in order to develop and they're not all thrown at you like some cozies.

If you're a writer (or want to become one) this is a fun read since there are sample query letters and she makes it seem that working at a literary agency would be a fun job, but the daily quota would be murder.

Overall, I think you'll enjoy this entry since it is a fast paced read, but like I said, if you have other things on your mind, it may slow you down. 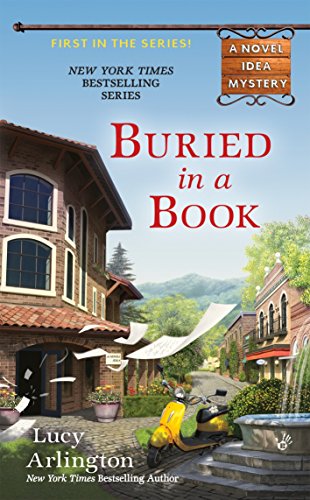 Buried in a Book (A Novel Idea Mystery)
Buy Now