Even though I thought the eighth installment was a little slow, this installment picks up the steam again proving that Jenn McKinlay hasn't run out of ideas yet (and when the series ends, will probably end it on a positive note).

After the trouble in Las Vegas, everyone is back in Scottsdale where the final preparations for Angie DeLaura and Tate Harper's wedding are nearing. In true bridal sense, Angie is all forms of bridezilla and Melanie Cooper is trying to prove her innocence when she comes across yet another body.

I really wouldn't want to be a friend of Mel's!

Anyway, her old college roommate Diane Earnest stops by the bakery to place an order for a dozen break up cupcakes. Melanie obliges and Diane is holding a secret over her and she has to follow Diane's directions to a tee. Of course, once the delivery is made, Mel will no longer be in debt to Diane.

The next morning, Mel goes on a wild goose chase trying to track down Diane's fiance' Mike Bordow and with each failed stop, Melanie becomes more agitated with what seems like a game for Diane.

When she finally gets to the business that he owns, she wanders around and can't find anyone, especially Mike. After going into the warehouse, she does find him, dead in a box of balls.

Having been accused of the crime, Mel calls her Uncle Stan and lets him know what's going on and he brings along a new partner, Detective Tara Martinez who would like to see Mel fry for the way she "dumped" her cousin, Manny.

Between trying to find the real killer, Mel may want to subconsciously kill Angie since she's driving her batty. She keeps changing her mind over wedding details and Mel just prays that she won't be as bad when it's her time to get married.

While everything ends well and on yet another cliffhanger, the series has grown into one of my favorites. In the beginning, I wasn't too impressed since the characters were constantly quoting movies and it became boring. Now they may quote half a dozen, which is good.

Also, the ending from Vanilla Beaned is discussed early on so there's no wondering what happened at the end and per usual, there's a few cupcake ideas for you to try (if you're so inclined).

Because the characters are so much fun (and Angie is painted as the best bridezilla that I've ever read) you do find yourself turning pages fast and at least in my mind, the setting is perfect.

Well, except for the heat when a story has been set in the summer months. 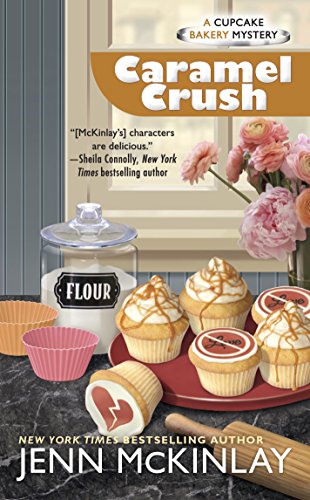